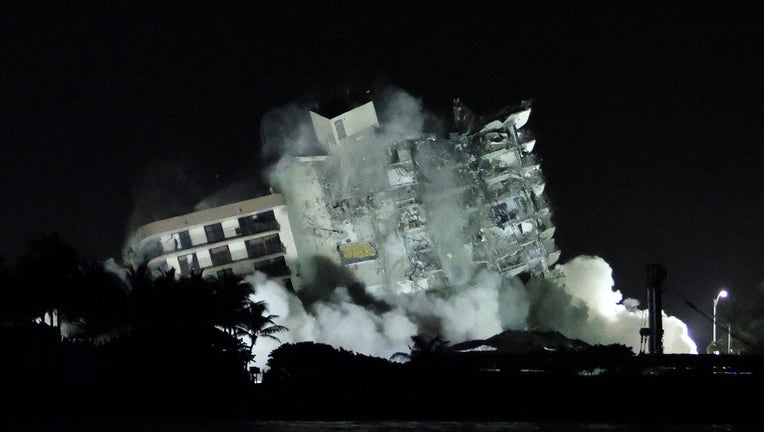 SURFSIDE, FLORIDA - JULY 04: The remaining part of the partially collapsed 12-story Champlain Towers South condo building falls with a controlled demolition on July 4, 2021 in Surfside, Florida. The decision by officials to bring the rest of the buil

SURFSIDE, Fla. - Demolition crews set off explosives late Sunday to bring down the damaged remaining portion of a collapsed South Florida condo building, a key step to resuming the search for victims as rescuers possibly gain access to new areas of the rubble.

Crews were to begin clearing some of the new debris so rescuers could start making their way into parts of the underground garage that is of particular interest. Once there, rescuers are hoping that they will gain access for the first time to parts of the garage area that are a focus of interest, Miami-Dade Assistant Fire Chief Raide Jadallah has said. That could give a clearer picture of voids that may exist in the rubble and could possibly harbor survivors.

The precarious, still-standing portion of a collapsed South Florida condo building was rigged with explosive charges and set for demolition overnight, Miami-Dade County officials said late Sunday. The work has suspended the search-and-rescue mission, but officials said it will open up new areas for rescue teams to explore.

Rescuers will await the "all-clear" after the demolition and then immediately dive back into the task of trying to locate any survivors buried under the rubble, County Mayor Daniella Levine Cava said. Officials had previously said that the search could resume from 15 minutes to an hour after the detonation.

"We are standing by. We are ready to go in, no matter the time of night," Levine Cava told a news conference Sunday night.

Search efforts have been suspended since Saturday afternoon to allow workers to drill holes for explosives. Miami-Dade Assistant Fire Chief Raide Jadallah said earlier that up to 210 rescuers will be poised to restart the search as soon as the site is declared safe after the blast.

Levine Cava said Sunday that demolishing the building was a top priority.

"Bringing down this building in a controlled manner is critical to expanding the scope of our search-and-rescue effort," she said at a news conference.

Officials had evacuated residents around the site ahead of the demolition and warned others to stay indoors and close windows, doors and any other openings that could allow dust in.

So far, rescuers have recovered the remains of 24 people, with 121 still missing. No one has been rescued alive since the first hours after the June 24 collapse, but officials have pledged to keep looking despite the dwindling chance of finding survivors.

"There’s nobody in charge really talking about stopping this rescue effort," Surfside Mayor Charles Burkett told CBS’ "Face the Nation." "This rescue effort as far as I’m concerned will go on until everybody is pulled out of that debris."

Concerns had mounted that the damaged Champlain Towers South building in Surfside was at risk of falling on its own, endangering the crews below and preventing them from operating in some areas. The approach of Tropical Storm Elsa added urgency to the demolition project. The latest forecasts have moved the storm westward, mostly sparing South Florida, but meteorologists have said the area could still feel effects starting Monday. 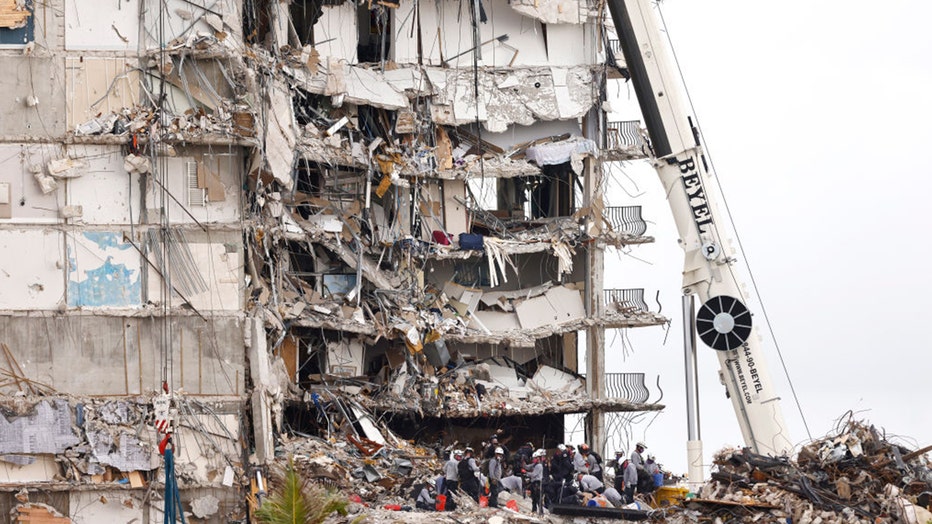 Jadallah said suspending the search effort was necessary during the drilling work ahead of the demolition because it could cause the structure to fail. Once the structure is gone and its remnants cleared, rescuers should have access for the first time to parts of the garage area that are a focus of interest, Jadallah has said. That could give a clearer picture of voids that may exist in the rubble and could possibly harbor survivors.

State officials said they hired the BG Group, a general contractor based in Delray, Florida, to lead the demolition. It was not immediately known how the company was selected, but a contract for the projects calls for the state to pay the company $935,000.

A spokesperson for the state’s Division of Emergency Management said the company is subcontracting with Maryland-based Controlled Demolition Inc., which experts say is among only a handful of companies in the U.S. that demolishes structures using explosives. The company was supposed to place explosives on the basement and lobby levels of the still-standing structure, according to the contract for the work.

The detonation aimed to bring the remaining portion of the building straight down and toward the street side, away from the existing pile of debris, Jadallah said.

The method of demolition is called "energetic felling," which uses small detonation devices and relies on the force of gravity. It was expected to bring the building down in place, containing the collapse to the immediate surroundings.

A spokesperson for the state’s Division of Emergency Management said BG Group subcontracted with Maryland-based Controlled Demolition Inc., which experts say is among only a handful of companies in the U.S. that demolishes structures using explosives.