Police say a man shot on I-35 West in Fort Worth last week likely caused the events that led to his own death.

FORT WORTH, Texas - Police say a man shot on I-35 West in Fort Worth last week likely caused the events that led to his own death.

The road rage shooting shut down I-35 in North Fort Worth for hours last Friday.

Police made it clear they didn't want to call the 19-year-old who was shot the victim. We now know why.

Police say he stopped his motorcycle in the middle of the highway and walked toward the driver of an SUV with a gun aimed at the driver. But the SUV driver also had a gun.

Fort Worth police are still investigating what happened. But from what they know right now, they call this ending the worst-case scenario in a road rage situation. 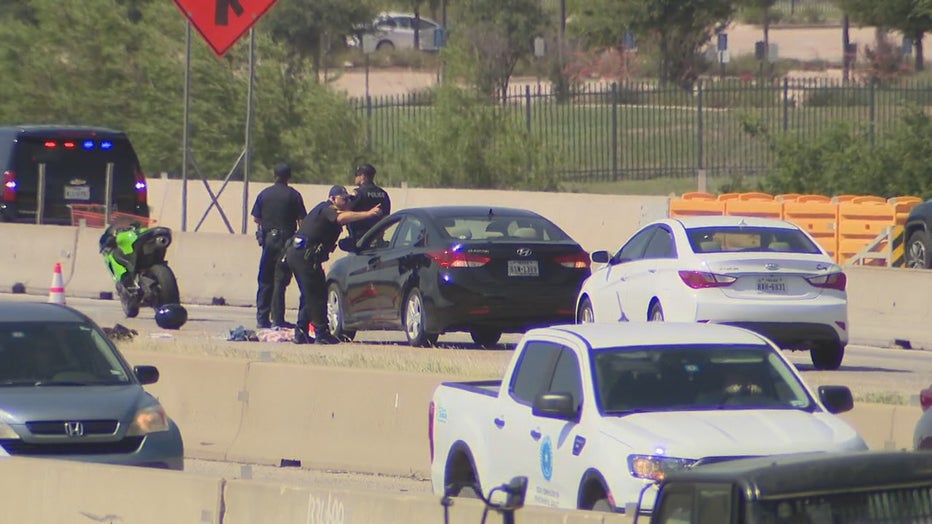 Isel Valenzuela describes the aftermath of a road rage shooting Friday afternoon that ended with the death of 19-year-old JaDerek Gray.

"I saw a motorcycle. A green motorcycle speed pass me up between me and the next car. Maybe 10-15 seconds later, I hear four gunshots," he recalled. "I look over and I see him laying there. With blood all on his chest and his stomach."

Valenzuela parked and ran over to help, noticing a green motorcycle parked on the freeway with the kickstand down about 30 feet behind Gray.

"I turned off the bike because it was still running," he said.

Gray was taken to the hospital, where he was pronounced dead.

After investigating, Fort Worth police say Gray caused the shooting that killed him. Police say he was traveling in between lanes, which is illegal in the state of Texas.

The driver of an SUV didn’t see him when trying to change lanes. Police say Gray then sped up ahead of the SUV driver, stopped the motorcycle in the middle of the highway and stopped traffic. He then pulled out a handgun and pointed it at the driver of the SUV.

"The driver of the SUV asked him to please put the gun down," said Fort Worth Officer Tracy Carter.

That’s when police say the SUV driver, who said he had children in the car with him, pulled out his own gun and shot Gray.

Officer Tracy Carter says investigators believe Gray also fired his weapon but did not hit anyone.

Valenzuela is still trying to process what he saw.

Police are urging drivers to stay calm and de-escalate to avoid similar tragedies.

"When you’re on 35 and you’re on the freeway and you have a disagreement with someone, it’s okay. Let it go. Just keep driving," Carter said.

Fort Worth police say the driver of the SUV has been cooperative and was the first person to call 911. Police say right now the SUV driver has not been charged with anything, and it appears he acted in self-defense.