FRISCO, Texas - The FBI arrested a Frisco woman on Friday for her involvement in the riot at the U.S. Capitol last week.

Jenna Ryan, who is a realtor in the area, faces charges for "knowingly entering or remaining in any restricted building or grounds without lawful authority" and "disorderly conduct on Capitol grounds."

In a statement of facts unsealed on Friday, the feds say Ryan and others arrived by private plane from Denton to Washington D.C. and in a social media post made threats to storm the capitol and posted photos and video of her at the capitol during the riot involving a pro-Trump mob.

A video posted the day of the riot to her Facebook account shows her speaking in mirror and stating "We're gonna go down and storm the Capitol. They’re down there right now and that's why we came and so that's what we are going to do. So wish me luck." 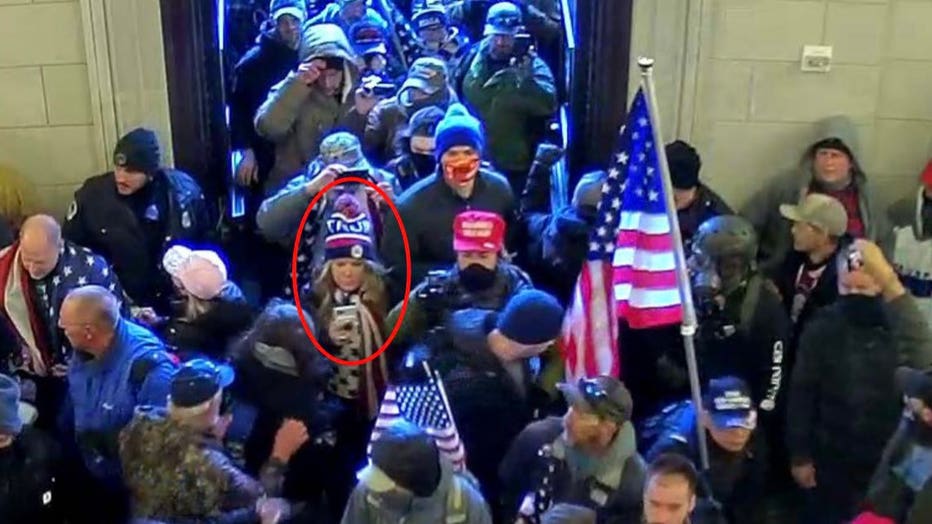 Later that day, Ryan posted video of herself on Facebook marching to the Capitol. She subsequently tweeted a photo of herself in front of a broken window at the Capitol building, writing "Window at The capital [sic]. And if the news doesn’t stop lying about us we’re going to come after their studios next…"

Ryan spoke with FOX4 earlier in the week and said she didn’t think she would be taken into custody.

List of Texans identified as being involved in Capitol riot

More Texans accused of being involved in riots at the U.S. Capitol are now under FBI investigation, and some have already been arrested.

Ryan admitted to being at the Capitol and going inside during the storming, but claims she was peaceful and was unaware of what was going on around her at the time.

There’s no provided evidence she directly caused violence at the capitol.

"We are looking to identify every single person who was involved in that siege at the Capitol," said Matthew J. DeSarno, special agent in charge at the FBI Dallas.

The FBI says, nationwide, Ryan is one of more than 275 open cases related to the insurrection, and it has received more than 100,000 pieces of digital media tips, plenty relating to North Texans.

"Tipsters have turned in their friends, neighbors, and relatives. All increasingly radicalized by inflammatory rhetoric," DeSarno added.

Five people, including a Capitol police officer, ultimately died when Trump's supporters stormed the Capitol building after an incendiary speech by the president. The riot halted the certification of the Electoral College by lawmakers for several hours.

Ryan joins Grapevine’s Larry Brock Jr., who was inside Capitol chambers wearing combat gear and carrying zip-ties, and a man named Troy Anthony Smocks, as North Texans arrested for actions at the Capitol.

A judge released Ryan hours after her arrest.

Judge rules Grapevine man arrested for Capitol riot can be released from jail, with certain conditions