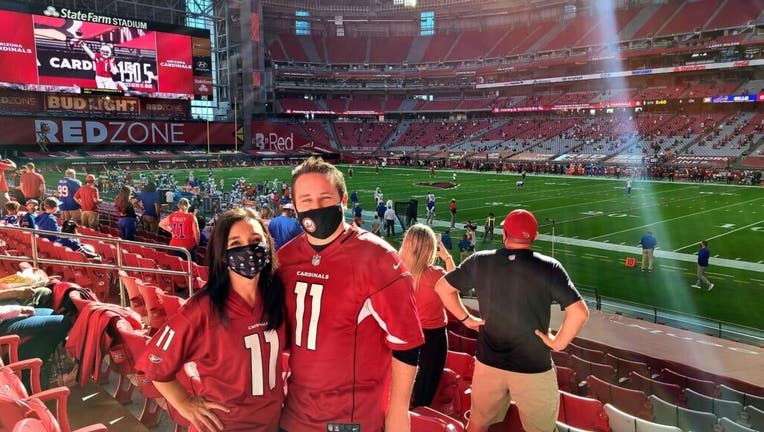 PHOENIX - The NFL season keeps plugging along during the pandemic with some fans finally allowed to attend the games in person, including fans of the Arizona Cardinals.

Two weeks after a few Cardinals players tested positive for COVID-19, the team is back out on the field taking on the Buffalo Bills in Glendale.

Long time season pass holder Steven Slugocki was in the stands for the first time this year and talks about the COVID-19 precautions the stadium is taking.

"I am so excited to be back. It is so great to be here, great to have some semblance of normalcy, even if I have to wear a mask," Slugocki said.

The Cardinals are battling the Bills in what is only their third game this season with fans in the stands. A limited 4,200 fans are allowed, which is just about 15% of the stadium’s capacity.

"This is a very weird experience. I have to tell you being in a basically empty stadium, normally 65,000 fans," Slugocki said.

Everyone at the stadium is indeed wearing a mask, he said, and that’s something he says officials are very strict about.

"They’re wiping down the surfaces, constantly reminding you to wear a mask and they are making sure everyone is staying distant. And I do feel safe here compared to a lot of other places," Slugocki said.

Meanwhile, the Arizona State University Sun Devils canceled its next game at Colorado due to positive COVID-19 cases among players and staff.

Slugocki who is also an ASU season pass holder says he hasn’t gotten to go to one of those games yet, but he is hopeful for the rest of the season for both of his teams.

"Who knows what’s gonna happen but hopefully they are still gonna allow fans here in a safe manner so we can all still enjoy the game," Slugocki said.