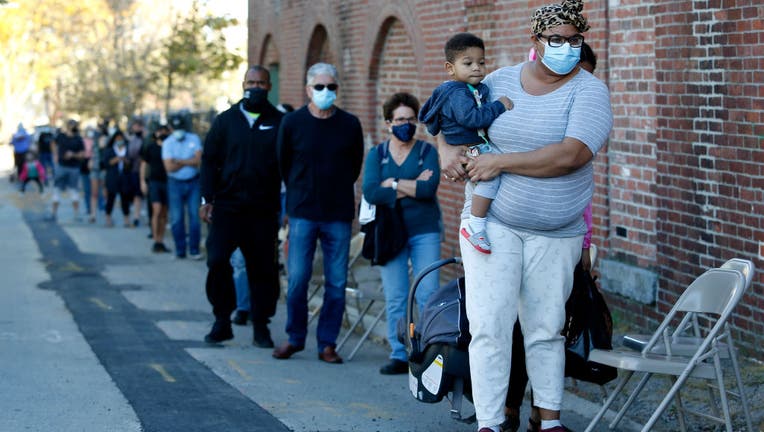 FILE - A woman holds her one year-old son as they wait in line to get a coronavirus test at the Harvard Street Neighborhood Health Center's COVID-19 Testing site at 895 Blue Hill Avenue in Boston's Roxbury on Nov. 10, 2020. (Jessica Rinaldi/The Boston Globe via Getty Images)

The day after Amanda Serulneck found out she might have been exposed to COVID-19, she visited a rapid testing center in New Jersey but was turned away because they ran out of tests.

She returned at 7 a.m. the next day. After waiting for an hour, officials said they had run out again. On her third try, Serulneck and her friend called several testing centers before driving for an hour to one with availability.

Lines for free COVID-19 tests stretch for blocks and hours in cities where people feel the dual strain of the coronavirus surge and the approaching holidays. But an increasing number of pop-up clinics promise visitors instant results — at a cost. Some charge $150 or more for a spot at the front of the queue.

While her friend who lacked insurance had to pay $125 for the test, Serulneck’s price was only $35. The real cost came from the two days she had to take off from work, she said.

“People are just trying to get by, and they can’t be taking off work for a week to wait for results,” said Serulneck, who works at a spa. "People need rapid testing to be available and affordable.”

Dr. Mark Shrime said his work gave him the flexibility to wait in line six hours for a test in New York City last week, but he knows not everyone can do the same.

“If I’m an hourly worker, I can’t take off six hours just so I can get a test so I can go back to work,” said Shrime, who needed a test to avoid a 14-day quarantine after traveling from Boston. “Another option was another place 10 blocks away from me where I could pay 250 bucks to get a rapid test, so the structure that we set up for people to be able to keep themselves safe from COVID baked into those structures is an inequity.”

Serulneck says it’s been frustrating to watch people do rapid tests so that they can go to parties or travel for the holidays.

“Some people who need rapid testing to work can’t afford it,” she said. “It’s not fair. The majority of people are in my position."

As numbers of cases climb in the United States and the country faces what health experts say will be a dark winter due to the uncontrolled spread of the virus, the demand for testing becomes greater. The U.S. has had more than 12 million reported cases and more than 255,000 deaths from the coronavirus since the start of the pandemic.

Social worker Chelsea Collins said she had to pay $150 for a test at a drug store after she lost her insurance due to the pandemic. After her husband, a union painter, learned he may have been exposed to COVID-19 last week, she was faced with finding a way to get tested again.

After visiting a free drive-thru testing site at 5:30 a.m. in Scranton, Pennsylvania, on Saturday and waiting about 1½-2 hours for a test, the 32-year-old Collins said she considers herself lucky. But she thought about those people without the means to get to a testing site not served by public transit.

“I feel for a lot of people with families, at the holidays and having to shell out $150 because they’re exposed,” Collins said.

Dan Fulwiler, president and CEO of Esperanza Health Centers in southwest Chicago, said costly rapid testing centers won’t help the communities that his nonprofit serves. About 70% of the center’s clients live in poverty, according to his estimate.

Fulwiler laments the lack of a national testing strategy that’s led to the proliferation of pop-up clinics. Daily demand also has risen at Esperanza -- the Spanish word for “Hope” -- from up to 150 in the summer to 400 now.

“I’m less worried about predatory pricing than I am concerned about access,” Fulwiler said. “Our clients will walk a mile to get a test for free rather than pay $15 here. A $150 test won’t be an option, and even at $30, they’ll think hard about it.”

It’s not just the cost and access that are raising questions about rapid tests.

Rapid testing sites could create “a lot of headaches for those of us who are trying to understand surveillance data,” said Jaline Gerardin, an epidemiologist and infectious disease monitor who helps compile weekly forecasts of pandemic trends for the Illinois Department of Public Health.

Officials already struggle to interpret reams of data from different tests that can produce different results, said Gerardin, an assistant professor at Northwestern University’s Feinberg School of Medicine. New sites may not report ethnicity, outbreaks and income levels necessary to monitor a pandemic that already disproportionately affects Hispanics and African Americans, she said.

Gerardin says there are three goals of testing: Individuals want to know if they’re infected; health and government officials want to understand trends and make policy decisions based on those trends; and test results provide a way to measure mitigation efforts such as quarantines and self-isolation.

Rapid testing may help with mitigation, she said.

“People who are getting tested less tend to be the same who are disadvantaged,” she said. “I don’t really see how an expensive testing option helps a testing infrastructure that is thin and under-resourced.”

The sites haven’t had a discernible impact in New York City, thanks to aggressive testing strategies by Gov. Andrew Cuomo and Mayor Bill DeBlasio, said Maxine Golub, spokesperson for The Institute for Family Health, which serves underserved communities in the New York metropolitan area.

The institute partners with the government to set up regular testing sites in areas of need, such as Harlem or parts of the Bronx, Golub said.

But many people don't have those options.

Korri Williams, a public school teacher in Virginia, is mulling whether to get a rapid test to give her peace of mind to visit her 78-year-old mother after finding out that co-workers tested positive.

There are limited options for rapid testing in her Williamsburg area, and without symptoms, she worries a test won’t be covered by her insurance.

“All of it comes down to economics in the pocketbook at the end of the day,” she said. “It’s not that I can’t purchase the test. But you know, sometimes you don’t have that extra $100 to go out and get a rapid test.”

“I’m blessed to have a job … but I do feel like it’s one of those things that is afforded to those who have means,” she added.