WARNING: GRAPHIC VIDEO A woman pushing a stroller was knocked to the ground and stabbed multiple times by her ex-boyfriend in the Bronx, according to police.

NEW YORK - A woman and her infant son were knocked to the ground by the woman's ex-boyfriend before he stabbed her multiple times in the Kingsbridge section of the Bronx.

The 21-year-old woman was walking with the man when they got in an argument. The man placed her in a choke hold, dragged her and the baby to the ground and then stabbed her before fleeing, according to police.

The horrifying incident on Tuesday at about 7:11 p.m. was captured on security video.

EMS responded to the scene on Sedgwick Avenue and transported both the victim and the infant to Saint Barnabas Hospital, where they were listed in stable condition. 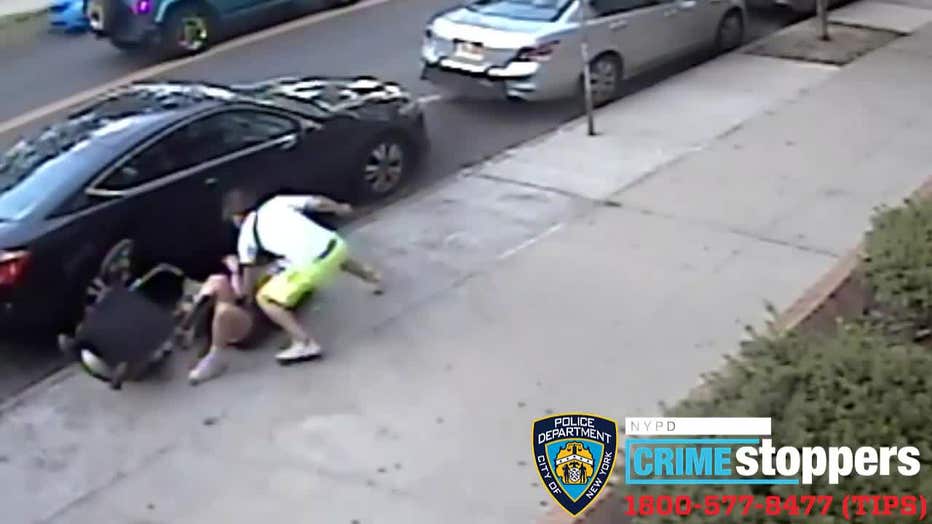 Police are looking for Carlos Gonzales, 25, of Manhattan.

He is described as having a medium complexion, approximately 5'10" tall, brown eyes, weighing 140 lbs., with a thin build and long black hair in braids. He was last seen wearing yellow shorts, a white t-shirt, white sneakers and carrying a black bag.

Anyone with information in regard to this incident is asked to call the NYPD's Crime Stoppers Hotline at 1-800-577-TIPS (8477). You can also submit tips by logging onto the Crime Stoppers website at WWW.NYPDCRIMESTOPPERS.COM, or on Twitter @NYPDTips.

All calls are strictly confidential.