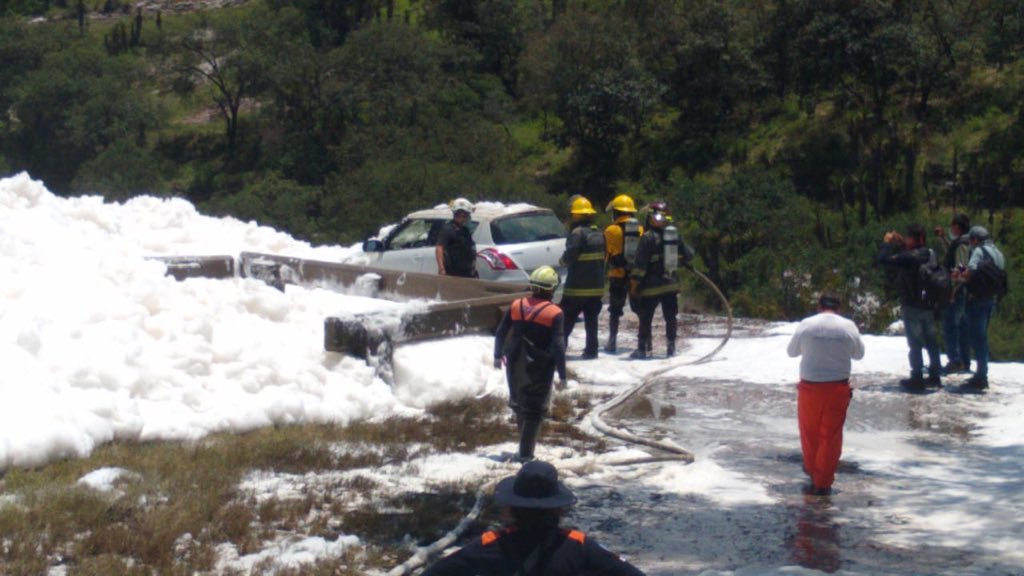 MEXICO CITY (AP) - A man trying to pose for a photo next to a towering hill of soap suds floating atop a heavily polluted stream in Mexico was found dead Friday, five days after he fell into the quivering mass and disappeared.

The man apparently had asked a co-worker to snap a picture of him standing next to the suds when he fell in, officials said.

Authorities in the central state of Puebla said excess detergents from homes that drain into streams feeding the Valsequillo reservoir caused the soap bubbles to accumulate. The streams also carry all sorts of household waste and the toxic brew eventually finds its way into the Atoyac River.

Photos of the attempted rescue Monday showed emergency personnel using fire hoses and a large fan in a failed attempt to penetrate the hill of suds that rose 20 feet (six meters) over their heads. After a full day of work, the local civil defense office said it was barely able to locate the man’s compact car. He was not in it, and officials began looking farther downstream.

On Friday, people in the town of Tecamachalco, almost 30 miles (50 kilometers) from where the man fell in, alerted authorities about a body in the stream. Town officials issued a statement later in the day saying the body had been identified as the man who fell in on Sunday, but did not release his name.

Town spokesman Cristian Medina said that because of the way currents flow, it is not unusual for authorities to find bodies, apparently of crime or accident victims, in the polluted stream during seasonal summer rains.

A local conservation group that combats pollution in the Atoyac river basin said this was not the first time that hills of detergent suds had formed on the waterway. The Stand Up for The Atoyac group distributed photos of similar soap mounds from 2015 and said a person walking his dog lost the animal in the hill of bubbles that year.

The Atoyac River basin also is plagued by huge discharges from textile plants and factories as well as open sewers and drains. The problem is so bad that at some points upstream, the river turns blue at times because of discharges of wastewater from blue jean factories.

Environmental groups say that the suds carry a disturbing range of toxic chemicals and waste.

In 2017 a government said the pollution represented a violation of residents’ human rights.

“The problem of toxic suds is not new,” Stand Up for The Atoyac said. “The lack of government oversight, the utter lack of standards in detergents and the lack of technology and legal acumen on the part of local governments means that the problem is only getting worse.”