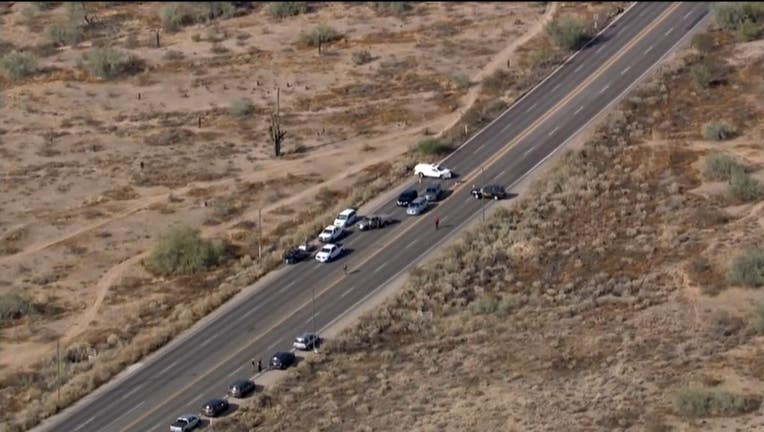 PHOENIX - Officials with the Maricopa County Sheriff's Office have released new information surrounding a shooting that left one person dead in North Phoenix over the weekend.

The shooting, according to a statement released on Nov, 23, happened on the morning of Nov. 21 near the area of Tatum and Jomax Roads, and is related to the search for a fugitive out of Colorado, identified as 55-year-old Ronald James Braden.

MCSO says the search for Braden began on Nov. 15, when deputies and members of the FBI Violent Crimes Task Force were contacted by law enforcement in Colorado, who requested assistance in locating and apprehending him.

Braden, according to investigators, was found during a traffic stop conducted on a red Toyota passenger car. At the time, authorities believe the car was occupied by the owner of a home who was possibly providing shelter for Braden.

"Unknown to deputies, the fugitive was also an occupant in the vehicle and as deputies approache, the fugitive took his own life with a firearm," read a portion of the statement.

Officials with MCSO say they are conducting an investigation into the incident.

MCSO says a Ronald Braden took his own life near Tatum and Jomax. He was accused of embezzlement and theft of public funds in Colorado.

According to a post made by police in Vail, Colo. on their unverified Facebook page on Nov. 22, Braden was arrested on July 4, and subsequently accused of multiple offenses, including embezzlement of public property, theft, official misconduct, forgery, and assault on a peace officer.

Braden's arrest in July, according to KDVR, was not without incident. The report states that Braden resisted arrest, and two of the three officers who contacted Braden were injured. During the arrest, Braden reportedly tried to get back into his car, in which a loaded AR-15 rifle was later recovered. In addition, Braden reportedly tried to disarm a police officer during a struggle.

Braden, according to a report by Denver, Colo. FOX affiliate KDVR, was once the IT Director for Vail until his resignation in 2018 following an arrest for alleged solicitation of a minor for prostitution. In another report on Braden's legal troubles by the same station, it was noted that under a plea deal made in 2019, Braden avoided jail time and having to register as a sex offender as a result of the offense, but received five years of probation.

According to KDVR, Vail city officials discovered questionable transactions soon after Braden's arrest and resignation. Prosecutors have alleged that Braden used his position to steer inflated contracts to companies controlled by a longtime friend, and that Braden would allegedly receive kickbacks from the friend in return.