Why CDC recommends wearing masks indoors even if fully vaccinated

The CDC updated guidance on masks, saying on July 27, 2021, that people in areas of high COVID-19 transmission should wear them indoors regardless of vaccination status.

CHILLICOTHE, Ohio - Ohio has planted a memorial grove of native trees to remember people who died of COVID-19, and governors and state lawmakers nationwide are considering their own ways to mark the toll of the virus.

Temporary memorials have sprung up across the U.S. — 250,000 white flags at RFK stadium in the nation’s capital, a garden of hand-sculpted flowers in Florida, strings of origami cranes in Los Angeles.

The process of creating more lasting remembrances that honor the over 600,000 Americans who have died from the coronavirus, though, is fraught compared to past memorial drives because of the politics.

Last year, a bill kickstarting a national COVID-19 memorial process died in Congress as the Trump administration sought to deemphasize the ravages of the pandemic.

States are a good place to start with monuments given the complexities involved in remembering the federal government’s early handling of the disease, said James Young, founding director of the University of Massachusetts Amherst’s Institute for Holocaust, Genocide and Memory Studies. 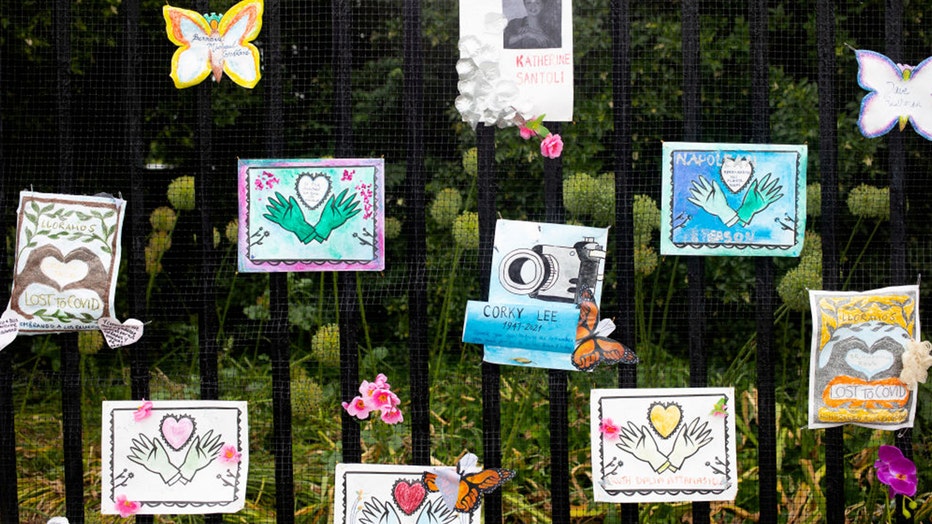 FILE - A fence alongside Greenwood Cemetery is covered with memorial art for those who died of COVID-19 during the pandemic, June 8, 2021 in Brooklyn, New York.

"We remember not just the victims, but we end up remembering kind of the U.S. administration’s indifference or even neglect, malignant neglect, of the disease itself, much less the victims," he said.

Non-pandemic monuments — such as the Vietnam Veterans Memorial in Washington, D.C., the Oklahoma City National Memorial and the National Sept. 11 Memorial in New York — resulted from negotiations among diverse stakeholders willing to push through controversy to hash out common narratives, said Nancy Bristow, a history professor at the University of Puget Sound.

A national COVID-19 memorial won’t be so clear-cut, she said.

"The problem and the strength of memorials is they tell the story we want to tell, and they may not have anything to do with learning from the past or even with remembering the complexities of what we’ve been through," Bristow said. "Commemoration and memorializing is not about nuance."

For governors who may be staking their political fortunes on the success of their virus response, however, the power to tell their own stories could be critical.

Ohio Gov. Mike DeWine, a Republican, and New York Gov. Andrew Cuomo, a Democrat, were among the first to seize the virus narrative with their memorial proposals earlier this year.

Earlier this month, Democratic Kentucky Gov. Andy Beshear announced a panel of experts from state government and the local art community had selected 11 artists to submit design proposals for that state's permanent memorial after a money-raising campaign this spring. A state lawmaker in Maine proposed legislation there to do the same.

The COVID-19 Pandemic Memorial Grove that DeWine dedicated in April at a state park near Chillicothe, in southern Ohio, included among its native trees the white oak, which can live for 400 years.

Cuomo is regrouping after plans for a concrete state memorial to essential workers at Battery Park faced outcry from neighbors upset at the related loss of green space. He has said workers need to be remembered for their valor.

"They saved the lives of New Yorkers," he said in announcing the panel to spearhead the project in April. "COVID was a war and they were war heroes. They gave their lives in the midst of that war to save others."

DeWine and Cuomo are patterning their memorial language around their contrasting leadership styles, Young said.

Bristow said the war metaphor was also used with the deadly 1918 influenza epidemic, which arose during a real war — World War I — and that conflation ultimately overwhelmed all memory of the deadly disease, which never got a national memorial.

"The war was a heroic narrative, the war was a success, the war was an expression of American exceptionalism and how great we were, which is how Americans wanted and want to see themselves," she said. "And the pandemic just didn’t offer that kind of story line."

RELATED: COVID-19 Delta variant symptoms: What we know and what to look for

For instance, listing victims by name on a national memorial, as monuments sometimes do, could be a tricky business.

Responding to concerns about deaths being misattributed to the virus, the Centers for Disease Control and Prevention issued a report in March that found only about 5% of the death certificates that listed COVID-19 as a cause listed it exclusively. Instead, it was often paired with other contributing problems, including exacerbating diseases such as diabetes and simultaneous conditions such as pneumonia.

As such details are worked out, some smaller permanent memorials — a statue to sanitation workers in New York, wall murals in Detroit and a churchyard sculpture in Dover, Delaware, for instance — are already in place.

Heartfelt yet ephemeral tributes are also abundant, including bell-ringings, vigils and websites.

Kristin Urquiza, co-founder and co-executive director of the Marked by COVID organization, said she is laying the groundwork for a push later this year for a permanent national memorial.

Urquiza drew attention last year for a speech she delivered during the Democratic National Convention blaming Trump’s lack of leadership for her father’s death from COVID-19, but she said the project is nonpartisan and unifying officials of both parties.

"A physical memorial would be a place to acknowledge our grief," she said. "A place we can unite from, to see each other as human beings, as Americans, as people, who went through this together."

Espaillat said the legislation envisions seating the memorial in the Bronx, an early COVID-19 hotspot. He refrained from addressing whether the virus politics of the Trump administration played a role in his earlier bill’s demise. But he said any memorial have to address some uncomfortable truths revealed by the pandemic.

"As we continue our push to establish this national memorial, we must consider and reflect on the serious racial disparities that COVID-19 ravaged throughout the health systems that make Black and brown communities more susceptible," he said in a statement.

Massachusetts photographer Keith Jacobs died of COVID-19 in April 2020, only weeks into the pandemic, just has he'd made it to the top of a list to receive a kidney transplant.

His widow, Marcy Jacobs, 64, of Stoughton, Massachusetts, said she fears her late husband and other pandemic victims will be forgotten as the disease wanes and people who didn’t lose a loved one move on.

"Don’t expect us to move on without giving us a place to grieve," she said, recalling her husband as kind, uncomplaining and simple. "Is it a stone for everyone? I don’t know."

President Joe Biden’s inauguration-eve remembrance for COVID-19 victims was nice, she said, but more is needed.

"What is the country going to do?" she said.