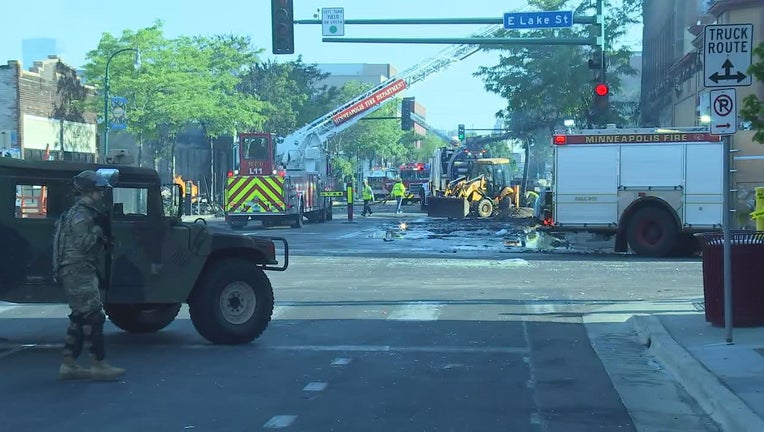 According to Guard records, this would include a force of about 13,000 service members. Department of Public Safety Commissioner John Harrington said by noon Saturday, they expect to have 2,500 soliders and airmen out in force.

Protests and riots continued Friday night into Saturday morning despite the 8 p.m. curfew the cities enforced. Commissioner Harrington said at one point during the night, IEDs were used against law enforcement.

"What was manifested in a very healthy gathering of community on Tuesday night, was still present on Wednesday, by Thursday it was nearly gone," Walz said. "And last night is a mockery of pretending this is about George Floyd’s death, or inequities, or historical traumas to our communities of color...because our communities of color and our indigenous communities were out front fighting hand-in-hand to save businesses that took generations to build.”

“The message is clear, Minnesota: we had a tragedy on Monday night, we understand the work we need to do and the generational pain that went into what happened with George Floyd and that murder. But at this point in time, nothing we do to address these inequities, nothing we do to provide justice to George Floyd and his family that I spoke with last night, none of those things matter to any of these people who are out there firing upon National Guard, burning businesses of our communities, and making intent on disrupting any semblance of civil life,” Gov. Walz continued.

Vast majority of rioters are from out of state, officials say

Governor Walz said about 80% of the rioters have been from out of state.

"We are under assault by people who do no honor our values," he said.

"This is no longer about protesting, this is about violence," Minneapolis Mayor Jacob Frey added. "I want to be clear, the people who are doing this are not Minneapolis residents.”

Additionally, St. Paul Mayor Melvin Carter said of the people arrested Friday night into Saturday morning, all were from out of state.