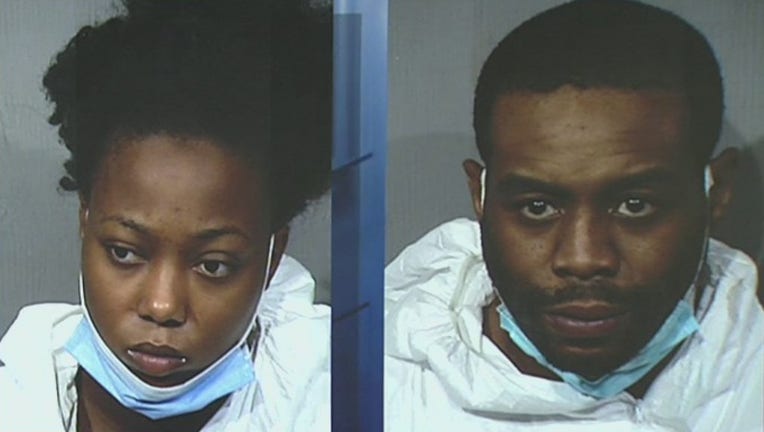 MESA, Ariz. - Two people from Mesa are now behind bars, facing charges for reportedly abusing three young children. One of them is in the hospital on life support after a Sept. 19 incident.

The children are ages eight, seven and four years old. Court documents describe the alleged horrors that went on inside the home at the hands of their mother Chaimara Shanae Washington and her ex-boyfriend, Brandon Cooper.

On Sept. 19, the eldest daughter was sent to the hospital unconscious with numerous injuries, including bruises, cuts and a bleeding brain. The injuries are so severe, doctors say she may not survive.

Washington reportedly told investigators that her daughter fell and hit her head. But, after police interviews and multiple different stories, Washington says she would "use a leather belt to discipline her children when they wouldn't listen or obey."

Washington admitted that she used the belt to hit her daughter multiple times over the past three days, authorities say.

The eight-year-old was reportedly punished because she jumped over a book in the living room. Washington allegedly swung a broken broom handle to move her daughter out of the way when she hit the wall and became unresponsive.

Court paperwork says Washington tried to wake her daughter up by performing CPR, even putting her into the bathtub to wake her up with water.

She then reportedly asked her ex-boyfriend, Brandon Cooper, to take the other children to their grandparent's house so they wouldn't see what was happening.

Court documents allege the children were required to exercise for an extended period of time, running and jumping over an exercise ball. It was later learned through interviews with the kids that Cooper, their mother's ex-boyfriend, would throw glass cups at the eight-year-old girl.

The four-year-old also had multiple injuries and could hardly walk.

Both Washington and Cooper are due back in court on Sept. 25 on suspicion of felony charges.