FOX 2 - A local boutique is publicly apologizing about a prospective employee who received an email from one of the owners - saying she was "not that cute." That harsh review of her appearance has now gone viral in a video by her on TikTok.

A local boutique is publicly apologizing about a prospective employee who received an email from one of the owners - saying she was not that cute.

"I apologize for something I did yesterday," said boutique owner Chuck DeGrendel in a Facebook Live video.

It may be too little too late for Degrendel to issue his apology. He is the vice president of operations at Ava Lane Boutique in Auburn Hills and also happens to be the husband of the owner.

It all started when  21-year-old Gracie Lorincz applied for a brand representative job.

But instead of sending his response back to his wife the owner, Degrendel sent it back to Gracie, which read " This girl is fresh out of college and not that cute. She applied to the sales model position are you sure you want me to interview her?"

"And their motto is beauty through confidence and this is the email I got from the VP," Gracie said in a TikTok video - where she gave her response. That video has now gone viral.

"It was embarrassing for her, it made her feel terrible," said Heather Lorincz, her mother.

Heather Lorincz says her heart broke for her daughter who was crushed after receiving the insulting email.

"She is sweet kid, she is not an attention hog, she is not a social media personality and didn't anticipate what this turned into," she said.

Gracie's TikTok apparently struck a nerve with thousands of people who didn't have the kindest things to say to the Ava Lane Boutique owners - online and by phone.

"And I didn't feel she was that cute," he said. "So I didn't know if I wanted to proceed with an interview. I don't know why I said that, but I did, and I am very sorry for saying that." 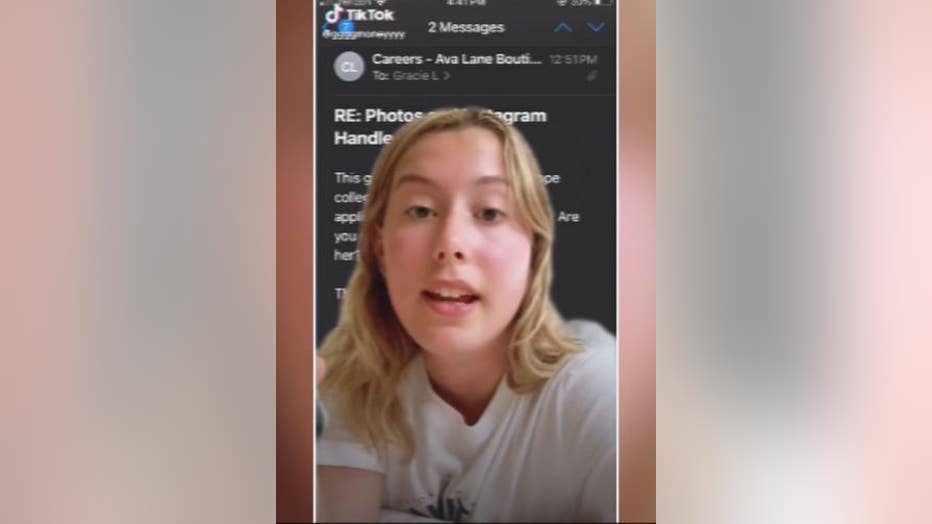 Gracie Lorincz's TikTok response to an email sent to her by accident criticizing her looks has gone viral.

Both Chuck Degrendel and his wife Laura may have broken down in tears during the Facebook Live video . But Heather Lorincz says she isn't convinced it was for the right reasons especially because it was never directed at her daughter.

"I don't want this woman's business to suffer," Heather Lorincz said. "I don't but I feel my daughter deserves a real apology not a Facebook Live."