A group of parents gathered on April 15 to ask Governor Doug Ducey to veto Senate Bill 1456, which&nbsp;they say is discriminatory.

PHOENIX - While Governor Doug Ducey signed the sports gaming bill inside the Heard Museum, a group gathered outside to protest another bill that's on his desk - one that would change the way students are taught sex education. Some call it discriminatory, while others say it's exactly what Arizona schools need.

"It brings controversy where controversy isn't needed and really what we need is inclusiveness and acceptance," said Tory Roberg, a parent.

A group of parents gathered on April 15 to ask Governor Doug Ducey to veto Senate Bill 1456, which they say is discriminatory.

SB 1456 is being met with controversy from some parents. The group voiced their concerns, saying because parents already have their choice as to what is taught to their child in terms of sex education, there's no point for the additional bill.

"I'm the parent of a non-binary, non-conforming child, and this bill will hurt my child. I'm here to ask the governor to veto this bill."

The bill passed along party lines and would require parents of students to opt-in to sex education curriculum and any instruction involving gender identity, gender expression, or sexuality.

"This is a bill that will inevitably end up being successfully challenge in court as a violation of equal protection. So it means we're opting in to lawsuits. It means we're opting on the national spotlight for a not so flattering reason," said Julie Gunnigle, a parent. 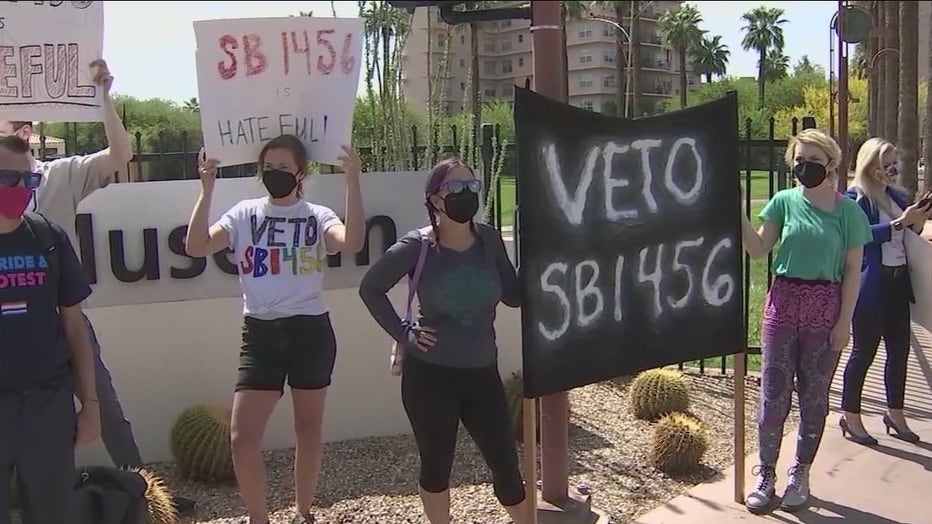 "The net affect when the law treats one group of people differently from another or creates bullying in our schools. It creates and environment when LGBTQ kids do not feel safe and it is not that environment of inclusiveness that we expect as Arizonans," added Gunnigle.

Parents against the bill say it is discriminatory legislation that will directly target LGBTQ students.

"The bill is completely unnecessary and it’s coming after LGBTQ youth that we just protected two years ago by removing hateful statute that didn’t allow schools to talk about this stuff. This law is basically bringing it all back," added Roberg.

Those in favor of the bill say parents deserve and need transparency.

"We need to stick to reading, writing and arithmetic. We want this curriculum to be open to the parents. Total transparency. This bill brings transparency. And someone has to wonder why and especially the tax payers, why they wouldn't want parents to see it," said Catherine Barrett, a parent.

The bill is on the governor's desk. There's no word on if he will sign it.

In a tweet, Arizona Superintendent of Public Instruction Kathy Hoffman encouraged the governor to veto the bill.

"Thanks for the inquiry about SB 1456. I am grateful the bill has passed the Legislature! First, SB1456 is completely agnostic concerning what schools can or cannot teach in regards to sexual education. It solely protects a parent’s right to decide when their child is ready for and what their child is exposed to regarding sexual materials at school.

"It fixes a common problem – lack of transparency. Parents shouldn’t have to plead with a school district to provide them reasonable time to review new or revised sex-ed curriculum they are being asked to give permission to. It is the parent, not the school, that has the ultimate responsibility for guarding the education, health, safety and well-being of their child, but too often the parent is kept out of loop. Second, the bill is inclusive of all students. It absolutely does not target or single anyone out. Everyone has a sexual identity. Everyone has a gender identity. And everyone exhibits gender expression in one way or another. It also eliminates confusion between what is opt-in and what is opt-out for both the school and parents regarding the sensitive subjects involved in human sexuality, promoting more parental engagement and respect for parents as their child’s primary educator.

"I am hopeful Governor Ducey will sign this important parental rights bill."