The Phoenix Law Enforcement Association is speaking out against the idea of defunding police as protests against police brutality continue to take place across the United States.

PHOENIX - Police departments across the country are under pressure and the police union in Phoenix pushed back.

During a news conference on June 12, Phoenix Law Enforcement Association President Britt London was flanked by a couple dozen members. Their main mission is to put out another message, that defunding police departments is a bad idea that will weaken departments and inherently make law enforcement worse.

"We need a fully-funded Police Department to make it better. You take away our tools and it makes it worse," said London.

PLEA officials wanted to make it clear that they are not out on the streets hunting minorities, rather responding to calls when something goes wrong and someone needs help.

"We don’t go out and hunt people that are brown and black, so I don’t get it. I don’t understand that," said London.

The president admitted things can and do go wrong in heated situations, but that an officer's conduct is reviewed with a fine-tooth comb. Not only by the department, but by the county attorney in some cases.

When asked about Phoenix Police getting rid of the carotid control technique that has been banned, London says it takes away another tool for officers to use before things go from bad to worse.

“Intermediate force is punches, kicks, elbows, knees, impact weapons. So if I’m punching a guy and it’s not working, do I just continue punching him or now do I have to pull my gun and kill him? That’s the concern we’re hearing from our membership," replied London.

London went on to say that the rank-and-file does not believe they're getting full support from city hall, mentioning Mayor Kate Gallego by name. The mayor's office sent FOX 10 a statement, saying it's possible to support police and want the advancement of new techniques that are overdue. 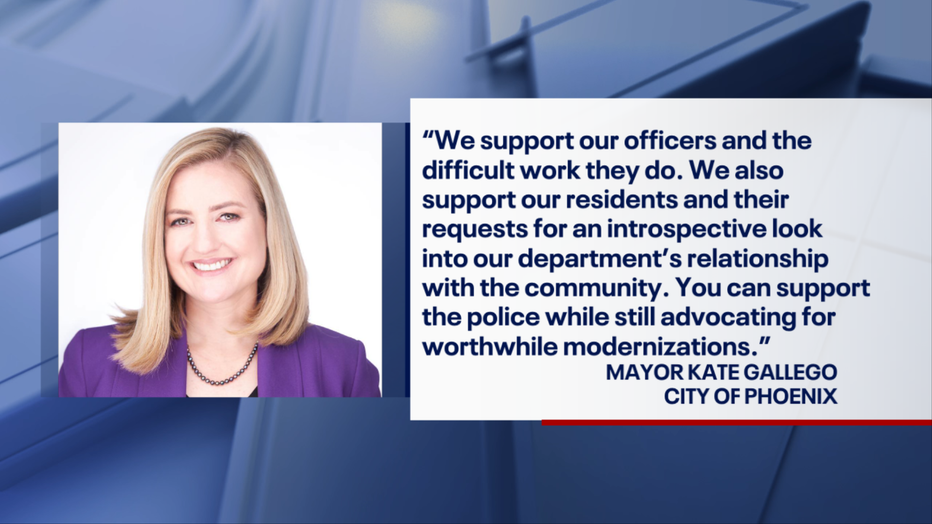 Meanwhile, Phoenix's police union, and its nearly 3,000 officers, are sticking to their guns: that less support for police means less safety for people.

"Our members have not heard one positive statement yet from the mayor's office, and that’s drastically affecting morale," London said.

Protesters, meanwhile, wonder why many police department budgets are increasing while overall crime is going down, and why many cities arm police officers with military-type equipment. The protesters also believe much of that money could be better spent on things like housing and mental health care.

"They’re not equipped to deal with these issues in our community, and so yes, investing in these solutions are going to reduce our need for police intervention to begin with," said Vidi Hernandez, Director of Women in Action.

London, meanwhile, has invited critics to meet with them to establish more dialogue and understanding.

With the so-called Carotid Control Technique out amid national controversy over the death of George Floyd, Phoenix Police officials are training its recruits on a kinder, gentler way to control suspects. FOX 10's Brian Webb has a look.

Phoenix Police to suspend carotid control technique training and use

Amid over a week of protests over police brutality and race relations, Phoenix Police officials have announced changes to training, as well as tactics their officers use.