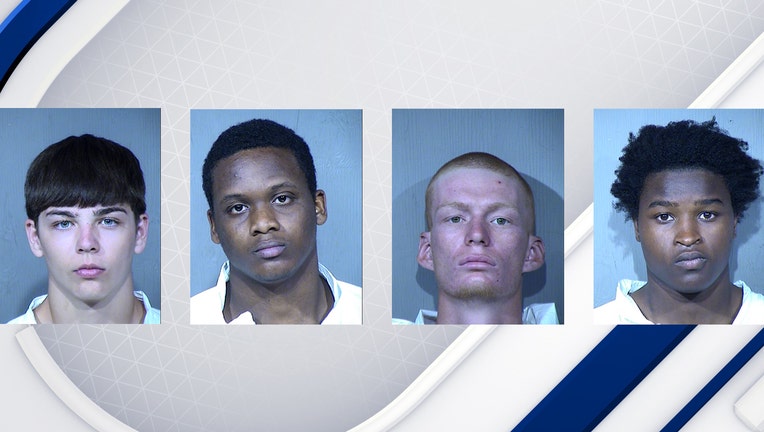 PHOENIX - Phoenix Police officials have released details surrounding a series of shootings in North Phoenix on Wednesday, one of which left a woman dead.

According to a statement released Wednesday night, four people have been arrested in connection with the shootings. They are identified as 18-year-old Troy Brunnetti, 19-year-old Charles Harris, 21-year-old Austin Olson, and 19-year-old Larry Scott.

Investigators say the incident began to unfold at around 12:12 a.m., when the first shooting happened in the area of 18th Avenue and Bell Road. The four suspects, who were armed with a long-rifle pellet gun, shot a 38-year-old woman while she stood in the drive-thru area of a fast-food restaurant.

The woman, identified by police on Thursday as Leanne Holum, was taken to the hospital, where she later died.

The second shooting, police say, happened in an area north of Bell Road and 7th Avenue. The victim, a 17-year-old male, was shot while he was walking down a sidewalk. That person was taken to the hospital with serious injuries.

The third incident, according to investigators, happened near the second incident. The suspects, police officials say, tried to carjack a victim, but the victim refused to surrender the car. One of the suspects fired the pellet rifle at the car, causing a window to shatter. The victim did not report any serious injuries.

The four suspects, police say, were arrested near 19th Avenue and Grover. They are accused of murder, drive-by shooting, aggravated assault, and armed robbery.