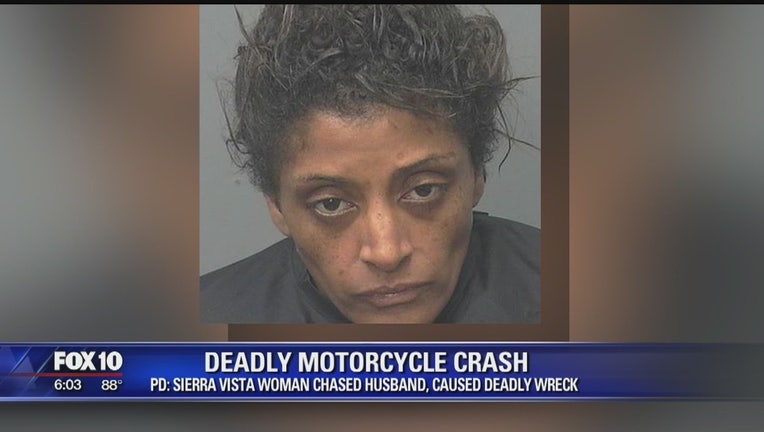 SIERRA VISTA, Ariz. (AP) -- Police say an Arizona woman faces manslaughter charges for chasing down her husband in her SUV, causing him to crash his Harley-Davidson into a light post.

Jennie Jones-Hurdlow, 37, is responsible for the death of her husband, 51-year-old Brian Hurdlow, following a fight that began at the couple's home southeast of Tucson, police said.

Witnesses told police in Sierra Vista they saw Jones-Hurdlow drive aggressively and erratically while trying to block her husband from leaving a convenience store on Sunday. Hurdlow managed to leave on his motorcycle, but his wife chased him at high speeds. He crashed into a light post about a mile from the store, dying instantly.

Police say he was driving over 65 mph when he crashed.

"It was very apparent by where she was, the position the car was in, that she was involved. All of this came to light very quickly," Sgt. Sean Brownson said.

Jones-Hurdlow has a criminal history and is a convicted felon, Brownson said. Officers responded to call of domestic violence at the couple's home in August after Jones-Hurdlow called for help saying her husband was in a mental distress and she couldn't handle him.

Brownson said Hurdlow attacked a police sergeant and that another officer had to use force to get him off the sergeant. Court records show Hurdlow was charged with aggravated assault on an officer, resisting arrest and criminal damage.

The couple was fighting again on Sunday, when multiple people at a convenience store called police to report that Jones-Hurdlow was screaming at her husband and trying to block him from leaving the store.

Hurdlow maneuvered a way out on his motorcycle and fled at a high speed while his wife chased after him, police said.

Police investigating the collision obtained a search warrant for the couple's home and found it in disarray. Decorative items had been broken and it was clear to police that a fight had taken place, Brownson said.

Jones-Hurdlow was arrested on Monday and faces one count of manslaughter. She's being held on a $75,000 bond. It's unclear whether she has an attorney.