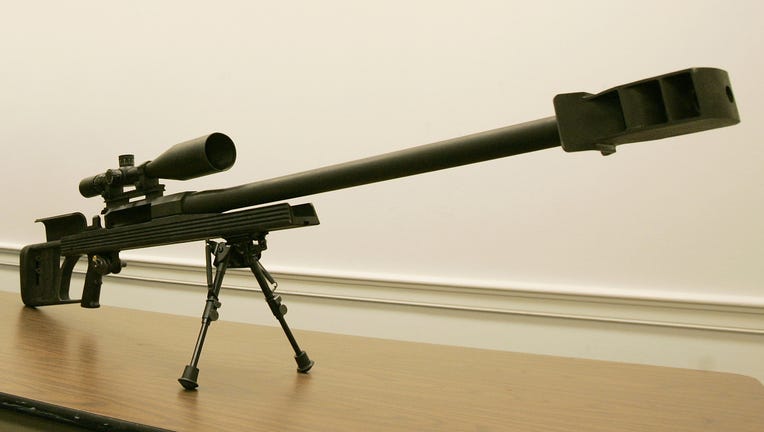 A Barrett .50 caliber rifle stands on display during a news conference at the Capitol in Washington, DC. (File photo by Mark Wilson/Getty Images)

TUCSON, Ariz. (AP) — Federal court records document numerous cases in which people are charged in Arizona with smuggling guns into Mexico, where such firearms often figure in drug cartel violence and other criminal activity.

The Arizona Daily Star reports that a review of U.S. District Court records in Phoenix and Tucson found 32 gun-smuggling cases in 2018 and that the records indicate that most didn’t result from seizures at border crossings. Instead, the Star reported, most of the investigations that resulted in court cases began either with agents scouring suspicious paperwork at gun stores or following up on firearms being traced back to Arizona after being recovered in Mexico.

The 2018 cases included young people buying weapons for $100 payouts, a man buying rifles from gun stores every few days for nearly a year in Green Valley and Tucson, and heroin addicts selling .50-caliber rifles to their dealers.

Firearms are largely illegal for civilians to possess in Mexico, but they are used widely by drug cartels and other criminal groups.

Prosecution narratives in the court cases typically describe guns being purchased quietly in southern Arizona and then being smuggled in small numbers across the border.

Just one such purchase can have “devastating repercussions” in Mexico, Assistant U.S. Attorney Angela Woolridge wrote in sentencing memorandums.

“It is impossible to know how many people already have been or will be threatened, injured, or killed because of the single firearm the defendant purchased,” Woolridge wrote.

Buying a .50-caliber rifle — a weapon that can shoot bullets that can pierce armor or down helicopters — is relatively easy in Arizona and elsewhere, said Monique Villegas, special agent in charge of the Phoenix office of the Bureau of Alcohol, Tobacco, Firearms and Explosives.

“My 86-year-old grandmother could walk into a store and buy a .50-caliber rifle if she wants to,” Villegas said.

Michael Huynh, 29, and Katie O’Brien, were sentenced in September to five years in prison after they bought three .50-caliber rifles on behalf of their heroin dealer, who would then arrange to have them smuggled into Mexico.

Huynh later said he had bought about 50 firearms for his heroin dealer in the previous year.

A rifle that Huynh bought in October 2017, a Century Arms RAS47 assault rifle, was recovered in Mexico three months later after a shootout between Mexican law enforcement and a cartel in La Paz, Baja California Sur.

Young buyers are common in Arizona and other states bordering Mexico, said the ATF’s Villegas.

“They probably have no ties to the cartel,” Villegas said, and instead are just looking to make a “quick couple hundred dollars.”

Straw buyers need to have clean criminal histories and “the chances of having a criminal record goes down if you’re young,” said Scott Brown, special agent in charge of Homeland Security Investigations in Phoenix.

As is the case with various types of crime, “some young people don’t recognize the significance of their actions,” Brown said.

With the billions of dollars that can be made by selling drugs in the U.S. “cartels are going to continue to fight to sell drugs and make money,” Villegas said.

“As long as the need for drugs is there, guns will be going south,” she said.