Organizations are pleading with Americans to donate blood.

The American Red Cross has declared its first-ever national blood crisis in the U.S., warning the public about the worst shortage in over a decade.

The nonprofit said in a statement this week that U.S. blood centers in recent weeks have reported "less than a one-day’s supply of blood of certain critical blood types—a dangerously low level." It noted a decline in donor turnout since the start of the COVID-19 pandemic, in addition to blood drive cancellations, staffing challenges and donor eligibility misinformation.

"If the nation’s blood supply does not stabilize soon, life-saving blood may not be available for some patients when it is needed," the organization warned in a joint statement with America's Blood Centers and the Association for the Advancement of Blood and Biotherapies.

The Red Cross, which supplies roughly 40% of the nation’s blood supply, has had to limit distributions to hospitals as a result of the shortage, according to the statement. It added that some hospitals "may not receive 1 in 4 blood products they need."

Overall, there has been a 10% decline in blood donation since the onset of the pandemic in March 2020, the Red Cross said. 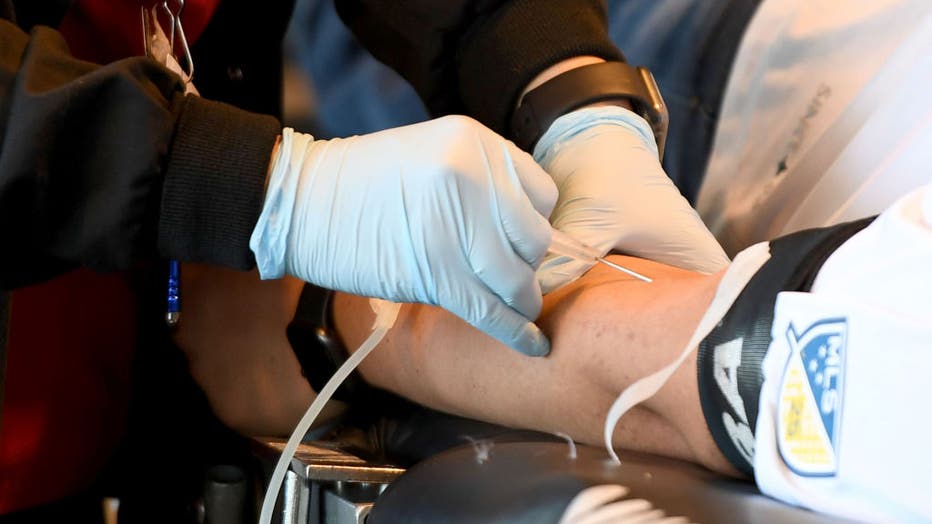 FILE - A person donates blood inside the Stadium club at Dignity Health Sports Park in Carson, California in a file image dated May 21, 2020. (Photo by Brittany Murray/MediaNews Group/Long Beach Press-Telegram via Getty Images)

Student donors at high schools and colleges accounted for roughly 25% of donors in 2019, a figure dropped to just 10% during the pandemic, according to the organization. The ongoing cancellation of blood drives due to illness, severe weather and staffing limitations have also contributed to the crisis.

"Additional factors like a surge of COVID-19 cases and an active flu season may compound the already bad situation," it said.

The warning comes as officials in other states have made similar pleas for blood, including officials in Minnesota who said last week that donations have reached a 10-year low. Hospitals in New England have also been forced to delay or reschedule surgeries

"We haven’t seen anything like this in about 30 or 40 years at least," Dr. Vishesh Chhibber, director of transfusion medicine at UMass Memorial Health, told the Boston Globe last summer.

The American Red Cross has declared its first-ever national blood crisis in the U.S., warning the public about the worst shortage in over a decade. (FOX 5 NY)

How to donate and blood types most needed right now

The Red Cross urged the public to make an appointment to donate blood online — and even consider booking additional appointments months out as "the need for blood remains constant."

Donors of all blood types are "urgently needed," it said.

Particularly, those with Type O positive are being sought because it is the most transfused blood type and can be transfused to Rh-positive patients of any blood type. The Rh factor indicates a certain type of protein found on the outside of blood cells.

Type O Negative is the universal blood type and what emergency rooms reach for when there’s no time to determine the blood type of patients, the Red Cross said.

It also stressed the need for platelets, which are the clotting portion of blood and must be transfused within five days of donation. Nearly half of all platelet donations are given to patients undergoing cancer treatments, the organization added.

"Individuals who have received a COVID-19 vaccine currently authorized in the U.S., including those manufactured by Johnson & Johnson, Moderna, and Pfizer, are able to donate blood and platelets as long as they are symptom-free and feeling well at the time of donation," it said in the joint statement.

A blood donor card or driver’s license or two other forms of identification are required at check-in. Individuals who are 17 years of age in most states — or 16 with parental consent where allowed by state law — can donate blood, the Red Cross said. They also must weigh at least 110 pounds and are in generally good health to donate.

High school students and other donors 18 years of age and younger also have to meet certain height and weight requirements.

"While some types of medical care can wait, others can’t," Dr. Pampee Young, chief medical officer of the Red Cross, said in the statement. Young noted accident victims, cancer patients and those with blood disorders like sickle cell disease.

"We’re doing everything we can to increase blood donations to ensure every patient can receive medical treatments without delay, but we cannot do it without more donors," Young added. "We need the help of the American people."