Police say this trend was likely impacted by the COVID-19 lockdowns in Phoenix, which has led to more people staying at home - and a significant increase in domestic violence cases.

PHOENIX - Violent crime in Phoenix rose significantly in the first half of 2020, according to a new crime statistics report released by police on Aug. 5.

Data from the Phoenix Police Department's Crime Analysis and Research Unit shows that the frequency of aggravated assault and homicide increased by nearly 25% from 2019 - and officials say this trend was likely impacted by COVID-19.

“Putting a definitive stamp on the cause of crime rising or falling is impossible to do, but it's clear the Covid-19 lockdown has changed the dynamics," said Sgt. Mercedes Fortune in the report.  “Fewer people on the streets and more people at home seems to have impacted these numbers." 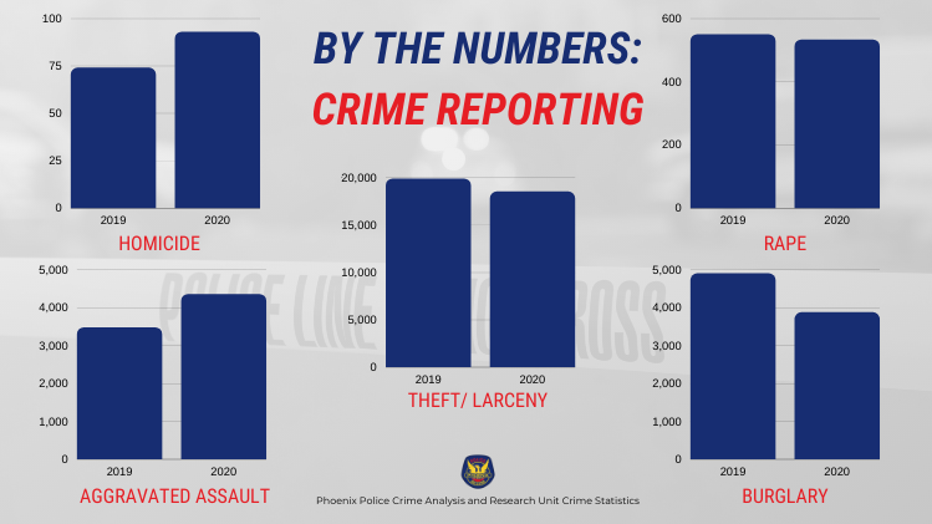 Domestic violence cases played a major role in this increase, police say. There were 10 homicide cases linked to domestic violence in the first half of 2019, while 24 cases have been reported this year - a 140% increase.

"When looking at the numbers year-to-date, through August 3, the situation becomes even more concerning," officials wrote in the report. "During that time, domestic violence-related deaths jumped 180 percent over the same time period in 2019."

However, the report also shows burglaries and thefts have decreased this year.

Burglaries in Phoenix have dropped consistently since 2011, and officials say cases are expected to drop 18% from 2019.

"Those really leave an impression, again, not only on our investigators, but the families and specifically, our community," said Sgt. Fortune.

Jeanna Panas, CEO of the Arizona Coalition fo End Sexual and Domestic Violence, has studied the number of statewide fatalities due to domestic violence. Through the end of May, there have been 49 cases in Arizona, and close to half were rooted in Phoenix.

"I anticipate if we do not have a way to leave our homes and get back to that same safety check safety systems that we had in place prior that were going to continue to see the same increases over time.”

“Just due to isolation that we’re all experiencing, as well as there’s just a lot of trauma and based on the fear and just being in your home unable to get away," said Panas.

Panas says call volume for service has dropped. The hope is that not only victims speak up, but the people who love them as well.

"If you have any idea or suspect there’s something please take the time to check on them especially with children," said Sgt. Fortune.