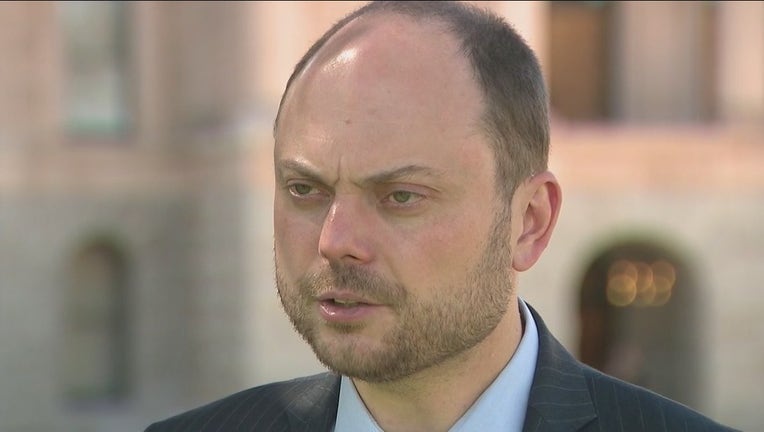 PHOENIX - A Russian politician who was in Phoenix to meet with the Governor and speak with the Arizona State legislator talked about his thoughts on Russian President Vladimir Putin, his life in Russia, and the ongoing Russian invasion of Ukraine.

Vladimir Kara-Murza lives in Moscow, and was there just a week ago. We spoke with Kara-Murza on a variety of topics ahead of his talk on March 15 at Arizona State University that is hosted by the Phoenix Committee on Foreign Relations.

Kara-Murza is a Russian democracy activist, politician, and author.

"Russia and the Putin regime are not one and the same," said Kara-Murza. "There are many people in my country who are opposed to these crimes just as categorically as they are opposed by people here in America."

Kara-Murza has often criticized Putin’s leadership of his home country, as well as the invasion of Ukraine.

"War of aggression. This is what Vladimir Putin is doing," said Kara-Murza. "It is an unprovoked, unjustified, unlawful war that is deliberately targeting civilians. That includes carpet bombings of residential areas. That includes bombings of maternity wards, hospitals, schools. These are war crimes, if not [crimes against humanity]."

Kara-Murza said since the Russian media is heavily censored, some Russians don't even know the war is happening. In fact, he says even calling the invasion a ‘war’ can result in someone getting locked up for years.

Twice in his career, Kara-Murza has been poisoned. He said chemicals were put onto his clothes that then sunk into his skin. The first time, he nearly died from kidney failure, and during the second time, doctors said they had to put him into a medically induced coma.

Police in Russia have refused requests to investigate the case, but still, Kara-Murza wants to share his message with the world: that the invasion of Ukraine is an invasion by the Putin regime, and not Russia, and that there is only one hope to end it.

"The only way to end these wars and this oppression and these crimes that the Putin regime is committing is to get Putin out of power," said Kara-Murza. "Needless to say, only Russians can effectively change Russia."

Kara-Murza also said those outside of Russia, like people in Phoenix, can help as well by standing in solidarity with Ukraine, as well as Russians who want to see democratic changes.

"Thousands of people have been going out on to the streets across Russia since this war began to protest, to demonstrate against it," said Kara-Murza.

Continuing Coverage of the Invasion of Ukraine

Read More: FOX Corp donates $1M to the American Red Cross for Ukraine relief efforts; how you can help