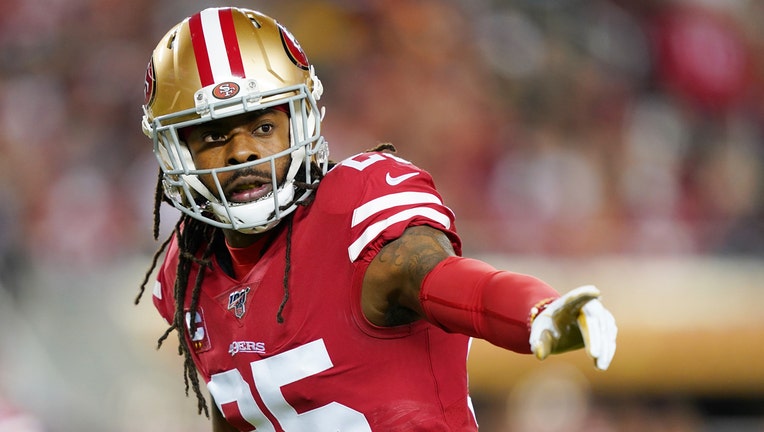 Richard Sherman #25 of the San Francisco 49ers lines up during the first quarter of the game against the Green Bay Packers at Levi's Stadium on November 24, 2019 in Santa Clara, California. (Photo by Thearon W. Henderson/Getty Images)

He recently donated over $27,000 to clear the lunch debt of two west-coast schools close to his heart -- with the goal of making sure students won't go hungry while learning.

One day after being named the National Football League Players Association Week 11 Community MVP, the Super Bowl-winning CB wrote a "personal check" to the principal of Cabrillo Middle School in Santa Clara, California, worth $7,491.27 to clear the cafeteria's outstanding balance.

Garber said he was working at the 49ers Museum when Sherman pulled him aside to hand him the check.

"Richard’s gesture created such goodwill for the 49ers that they went on to sack Aaron Rodgers and the Green Bay Packers the next day on national tv by a score of 37-8," principal Stan Garber posted on the school's website on Tuesday.

The donation comes as Sherman also gave $20,000 to the Tacoma, Washington public school system to eliminate student lunch debt within the area schools. Tacoma is roughly 30 miles south of Seattle, where he played for the Seahawks from 2011-2017.

In California, Garber said Cabrillo Middle School is the closest to Levi's Stadium, where the 49ers play during the NFL season.

"It's the most generous thing to happen for these kids, there's plenty in need and he didn't neglect them, it was the perfect way to give back and help them," Garber told ABC News on Thursday. "It was the kindest most generous gesture."

About 60 students are set to benefit from his donation.

The donations were made after California Gov. Gavin Newsom signed into law a new piece of legislation which bans the process in which institutions deny students a meal of their choice because of unpaid fees. Newsom was inspired by the story of Ryan Khyote, a 9-year-old boy who used his allowance to pay off his third-grade class's lunch debt.

Since 2013, Sherman has "helped more than 70,000 people in carrying out their mission of providing students in low-income communities with school supplies and clothing so they can more adequately achieve their goals," said Brandon Parker, NFLPA's communications manager.

Sherman donated $5,000 on Nov. 18, to help a youth football team in California get to nationals after their families didn't have enough money to cover the cost of travel.