In a letter released to the public, the New York senator and minority Senate leader called on Glenn A. Fine, acting inspector general of the Department of Defense, to investigate alleged retaliation.

The New York senator and minority Senate leader called on Glenn A. Fine, acting inspector general of the Department of Defense, in a letter released to the public. 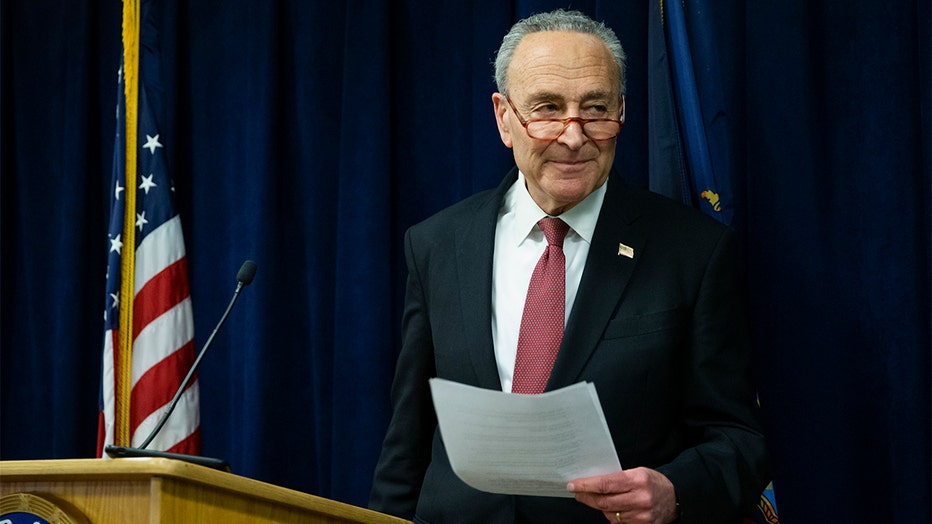 Senate Minority Leader Chuck Schumer (D-NY) exits after speaking with the media about impeachment trial at this office in Manhattan on February 6, 2020 in New York City. (Photo by Eduardo Munoz Alvarez/Getty Images)

“I write in response to retaliation against Lieutenant Colonel Alexander Vindman and whistleblowers like him following their testimony before Congress regarding the President’s efforts to solicit foreign interference in our 2020 elections,” Schumer wrote in the letter.

He called on the inspectors general to protect government whistleblowers amid Trump’s ouster of key government officials in the impeachment probe.

Vindman, who was serving as a White House national security council official when he testified before the House impeachment inquiry, was removed Friday and reassigned.

“LTC Vindman, a decorated military officer who received the Purple Heart after being wounded in Iraq, and his brother, Eugene Vindman, were fired on Feb. 7, 2020 from their roles on the National Security Council,” Schumer wrote. “Although LTC Vindman lived up to his oath to protect and defend our Constitution by bravely stepping forward to tell the truth, he has been viciously attacked by the President and forced to endure threats to his and his family’s safety.”

Schumer called the attacks “part of a dangerous, growing pattern of retaliation against those who report wrongdoing only to find themselves targeted by the President and subject to his wrath and vindictiveness.”

Also ousted Friday was Gordon Sondland, who had been Trump's ambassador to the European Union. Sondland was among 17 people who provided public and private testimony in the impeachment proceedings.

“Not only is the retaliation against LTC Vindman, the anonymous whistleblower and others like them shameful, it is also illegal,” Schumer wrote.

Similar letters are being sent to all 74 IGs calling on them to take immediate steps to investigate any “instances of retaliation against anyone who has made, or in the future makes, protected disclosures of presidential misconduct to Congress or Inspectors General."

Federal employees have rights, including under the whistleblower law, that ensure they are protected through the inspector general offices and are able to provide information to Congress as part of the legislative branch's oversight role.

“Without the courage of whistleblowers and the role of Inspectors General, the American people may never have known how the President abused his power in the Ukraine scandal,” Schumer wrote. “It is incumbent on you that whistleblowers like LTC Vindman—and others who put their lives on the line to protect our freedoms— are protected for doing what we hope and expect those who serve our country will do when called: tell the truth.”

The White House, which has stood by the dismissals, had also not been coy about whether Trump would retaliate against those he viewed as foes in the impeachment drama. White House press secretary Stephanie Grisham said last Thursday that Trump was glad it was over and "maybe people should pay for that.”

On Saturday, the president tweeted from the White House that some television coverage portrayed Vindman “as though I should think only how wonderful he was.” Trump said he didn't know Vindman and had never met or spoken with him but considered him “very insubordinate.”

Alexander Vindman's lawyer issued a one-page statement that accused Trump of taking revenge on his client.

“He did what any member of our military is charged with doing every day: he followed orders, he obeyed his oath, and he served his country, even when doing so was fraught with danger and personal peril,” David Pressman said. “And for that, the most powerful man in the world — buoyed by the silent, the pliable, and the complicit — has decided to exact revenge.”

The White House did not respond to Pressman's accusation.

“We do not comment on personnel matters,” said John Ullyot, spokesman for the National Security Council, the foreign policy arm of the White House where Vindman was an expert on Ukraine.

RELATED: Facebook is deleting the name of potential whistleblower

Vindman's status had been uncertain since he testified that he didn't think it was “proper" for Trump to "demand that a foreign government investigate" Biden and his son’s dealings with the energy company Burisma in Ukraine.

Vindman's ouster, however, seemed imminent after Trump mocked him Thursday during his post-acquittal celebration with Republican supporters in the East Room and said Friday that he was not happy with him.

“You think I'm supposed to be happy with him?" Trump told reporters on the South Lawn of the White House. "I'm not. ... They are going to be making that decision.”

Rep. Lee Zeldin, R-N.Y., tweeted that Vindman “should not be inside the National Security Council any longer. It’s not about retaliation. It’s because he cannot be trusted, he disagrees with the President’s policies, & his term there is coming to an end regardless."

News that both Vindman twins had been ousted led Rep. Paul Gosar, R-Ariz., to tweet, “The White House is running a two for one special today on deep state leakers.”

Defense Secretary Mark Esper was asked what the Pentagon would do to ensure that Vindman faces no retribution.

“We protect all of our service members from retribution or anything like that," Esper said. "We've already addressed that in policy and other means.”

Alexander Vindman is scheduled to enter a military college in Washington, D.C., this summer, and his brother is to be assigned to the Army General Counsel’s Office, according to two officials who were not authorized to discuss the matter publicly and so spoke on condition of anonymity.

Several career diplomats whose testimony during the impeachment hearings also helped Democrats build their case against Trump remain in their posts, in Washington and in Kyiv. The former ambassador to Ukraine, Marie Yovanovitch, whose ouster in spring 2019 was a focus of the hearings and who testified herself, has recently retired from government service.