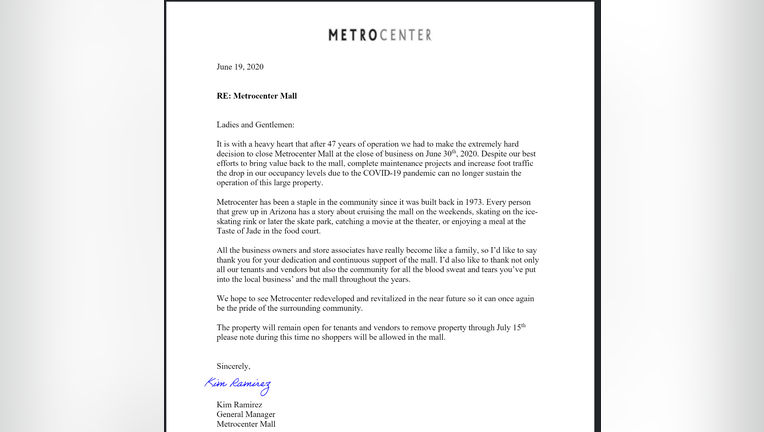 PHOENIX - After 47 years, Metrocenter Mall in Phoenix is closing its doors for good, according to a letter from the mall's general manager obtained by FOX 10.

"It is with a heavy heart that after 47 years of operation we had to make the extremely hard decision to close Metrocenter Mall at the close of business on June 30th, 2020," the letter reads.

The letter, sent to FOX 10 from Metrocenter store Good Night Sleep, explains how the economic downturn caused by the COVID-19 pandemic has forced them to close.

"Despite our best efforts to bring value back to the mall, complete maintenance projects and increase foot traffic, the drop in our occupancy levels due to the COVID-19 pandemic can no longer sustain the operation of this large property," wrote Kim Ramirez, the mall's general manager.

The mall, built in 1973, used to be a popular hangout for Valley residents, but has since seen a decline in visits over the past few years.

A Walmart opened at the mall in 2017 with hopes that it would revitalize the area.

Metrocenter will stay open for tenants and vendors to remove their property through July 15, the letter reads, but no shoppers will be allowed in after June 30.

"We hope to see Metrocenter redeveloped and revitalized in the near future so it can once again be the pride of the surrounding community," wrote Ramirez.

FOX 10 reached out to Metrocenter for a statement, but officials have not yet responded.