An autopsy study by Dr. Amy Rapkiewicz, chair of the department of pathology at NYU Langone Medical Center, revealed clotting in small blood vessels in organs throughout the body.

Since the emergence of the novel coronavirus in late 2019, research has shown that people with severe COVID-19 infection can go on to develop other health concerns like pneumonia and blood clots. New studies have found another troubling connection: diabetes.

Two recent studies from the Stanford University School of Medicine and Weill Cornell Medicine suggest that SARS-CoV-2, the virus that causes COVID-19, can target and damage the body’s cells that produce insulin, a vital hormone that regulates blood sugar in the body.

Diabetes occurs when an individual’s blood sugar — or glucose — is too high. Blood glucose is the body’s main source of energy and comes from food. Insulin is the important hormone made by the pancreas that helps glucose from food get into cells to be used for energy, according to the National Institute of Diabetes and Digestive and Kidney Diseases.

A high level of glucose in the body is the hallmark of diabetes, according to the National Institutes of Health, which supported the new research.

While most people recover from mild COVID-19 without longer-term health problems, it’s also known that those with type 1 or type 2 diabetes are more likely to get severely ill from COVID-19. The researchers sought to better understand the "intricate relationship" between the diseases.

Researchers in the study said the link remained after adjusting for traditional diabetes risk factors.

Earlier lab studies had suggested that SARS-CoV-2 can infect human cells that make insulin, called beta cells, and even replicate to make more copies of itself and spread to other cells.

Additional research by the Stanford team suggests that the coronavirus may be more likely to infect the insulin-producing beta cells. Experts say these particular cells contain the ACE2 receptor protein and others that the virus uses to enter and infect human cells, perhaps making them more vulnerable.

The research also suggested that infection can lead to reduced production and release of insulin. Furthermore, it appeared to lead directly to the death of some beta cells and transform surviving ones, in a process called "transdifferentiation," according to a post about the research by Dr. Francis Collins, NIH director.

"The consequences of this transdifferentiation of beta cells aren’t yet clear, but would be predicted to worsen insulin deficiency and raise blood glucose levels," Collins wrote. "More study is needed to understand how SARS-CoV-2 reaches the pancreas and what role the immune system might play in the resulting damage." 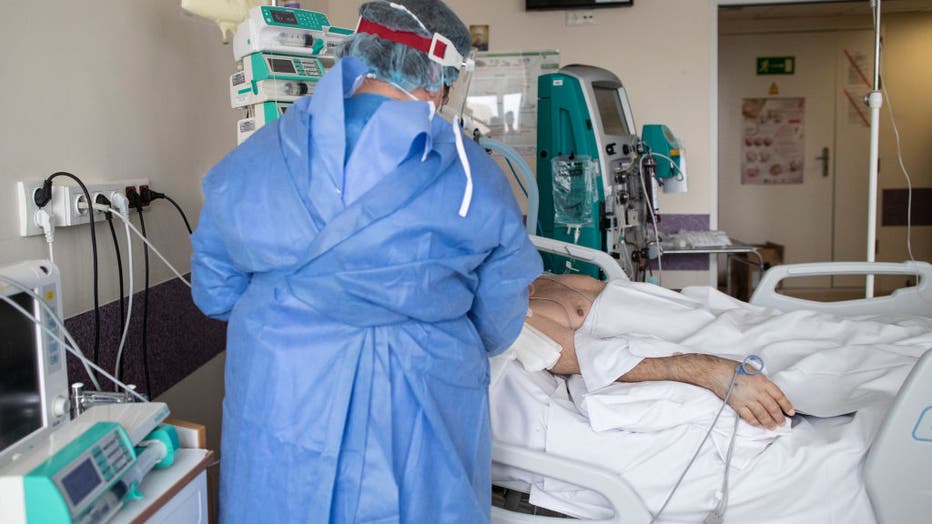 FILE - A medic in the ICU ward treats a COVID-19 patient on April 29, 2021, in Lublin, Poland. (Photo by Jacek Szydlowski/NurPhoto via Getty Images)

Collins added that the research serves as another reminder of the "importance of protecting yourself, your family members, and your community from COVID-19 by getting vaccinated if you haven’t already—and encouraging your loved ones to do the same."

Last year, diabetes was among the top killers in the U.S. with deaths from the disease increasing by 14% — the largest rise in decades. Experts believe a big reason may be that many people did not seek treatment in an emergency because they feared becoming infected with the virus.