On FOX 10 Investigates, the spotlight is on a 1993 cold case in Sedona after a young mother's life was taken after a domestic dispute. Nearly 30 years later, no arrest has ever been made. FOX 10's Justin Lum reports.

SEDONA, Ariz. - A medical examiner ruled her death a homicide, but the county attorney's office declined to prosecute the suspect, twice.

Why has Stephanie Wasilishin's case never been solved?

We take a deep look into the unsolved case.

"I remember her as just funny. She liked to kid around a lot, she loved her kids," said Wendy Wasilishin, Stephanie's sister.

Wendy has never stopped missing her big sister. It’s surreal for her to visit the home where the 32-year-old lived in 1993.

"Pretty hard to take in. I just miss her so much," Wendy said.

Surrounded by lush trees and the red rocks of Sedona, a comfy two-bedroom house on Coffee Pot Drive can be found.

Stephanie worked as a pastry chef at Pietro’s Restaurant where her longtime boyfriend was a chef, 31-year-old Russell Peterson.

Together, they raised a family. Their three-year-old Kristina and 10-year-old Nikki from Stephanie’s previous relationship, a time locked away in Nikki’s memories – yet she remembers what transpired on July 9, 1993.

"She was sitting on the couch and I went up behind her and I wrapped my arms around her and I gave her a hug and a kiss and I told her goodnight and that was 11 p.m. on July 8, 1993."

Operator: "What kind of help, sir?"

Peterson: "There has been a very bad accident."

Peterson's call to 911 was made at 1:40 in the morning, nearly 30 minutes after an alleged fight.

Peterson: "Me and my wife, we were in an argument, and she is hurt very bad."

Operator: "OK, what is wrong with her?"

Peterson: "She has been shot."

Operator: "She was shot? Who shot her?"

Operator: "You don’t know who shot her?"

Inside the couple’s bedroom, Stephanie laid on the floor, lifeless.

Operator: "Mr. Peterson, where does it look like she has been shot?"

Peterson: "It looks like she has been shot in the neck or the chest."

"All I remember was a flashlight and I was scared and I started screaming," she said.

Later that morning, Peterson is interviewed for the first time.

‘Next thing I know there was a pop, and she dropped’ 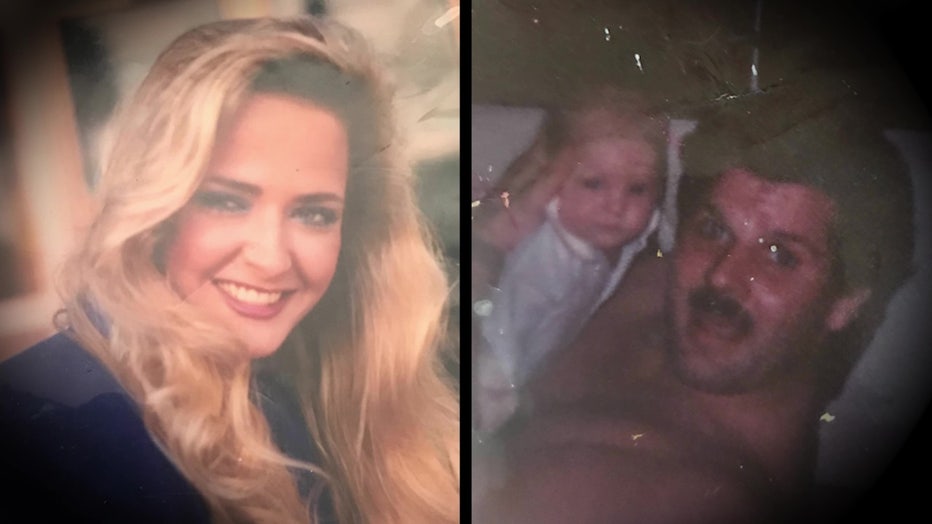 He said he returned home from work after eleven that night, took a shower, and shared a bottle of wine with Stephanie on the couch. The conversation in the living room evolved when Stephanie said she’d been on the phone earlier with Nikki's father – her ex.

The mood became confrontational when they discussed Peterson's upcoming trip to New York for a two-week culinary training.

"She goes into the bedroom and she comes back out, she has the gun in her hand, and she cocks it back, and she goes, "Russell, I’m gonna shoot you,' and I put my hands up and say ‘Steph, what are we talking about here?’" Peterson explained to the police.

The gun was a Ruger Redhawk .44 magnum revolver.

According to the police report, Peterson claimed Stephanie shot at him but missed before he followed her into their bedroom for that final shot.

An investigator asked him, "Where was the gun when it went off in relation to you and here? Waist-high, head high, in between you, were you close together or far apart?"

Peterson responds, "No, we were not far apart. We were close together. I can’t give you exacts on that. It all happened so fast. I don’t know. I mean, we were there, there was a struggle, next thing I know there was a pop, and she dropped."

The interview reveals Peterson didn't call 911 until after deciding where to place the gun.

"I didn’t know what to do, and I didn’t want to be accused of murder, of anything like that. Picked up the gun, I put it in the holster, I put it back in the closet, I brought it back down and I said, 'No, that’s stupid. It’s happened, there’s nothing you can do about it at this point,’ and I set it back there on the ground and you guys came," Peterson explained.

Nikki says she had no idea her mom was dead until her sister shouted to her.

Police say the three-year-old admitted that although she saw her mother on the floor, she did not witness the shooting.

Who actually pulled the trigger during this heated struggle? And what would cause Stephanie to grab a gun she had never used?

"We had a good and semi-bad relationship, just as relationships go. After the first time, the gun was never grabbed before," Peterson said.

The investigation goes deeper, then runs into a problem

The Cold Case of Stephanie Wasilishin: A changing alibi, and why charges were never filed (Part 2)

In the finale of this 2-part series, FOX 10's Justin Lum dives into why charges were never filed in the 1993 murder of a young woman in her Sedona home.

The medical examiner who performed Stephanie’s autopsy ruled the manner of death a homicide is Dr. Philip Keen with Maricopa County.

In 1993, investigators did refer to Peterson as the suspect, submitting the case to the Yavapai County Attorney’s Office twice, but prosecutors declined to file charges due to "insufficient evidence."

"It’s only of course Russell’s side that we have. That makes it so difficult," Leon said.

When Stephanie's sister Wendy was asked if she ever first threatened to kill him and then kill herself with her two kids in the house, she replied, "No. She loved her kids. She was a perfect mom. She decorated all the time. She spent a lot of time with her girls."

"The million-dollar question," Leon said. "Did she commit suicide? Or did Mr. Peterson participate in her dying that night?"

The medical examiner did make a key observation about Stephanie and the gun residue on her hand, but why did he determine this to be a homicide? What did Sedona PD not have available to provide to the Yavapai County Attorney’s Office?

‘My mom would never touch a gun’

"She’s still there. I just feel like my mom’s there. She’s still there, and it’s the only reason I’d ever wanna live in Sedona again. If I could live here. I wanna buy this house one day," Stephanie's daughter Nikki says.

For Nikki, nothing matters more than finding out what exactly happened inside their home on July 9. She says she's certain it was murder.

"When I have people tell me that it’s suicide or an accident or whatever you want to say, I know it’s just a blatant lie. My mom would never touch a gun … her two children were sleeping just feet away," Nikki said.

According to the medical examiner’s report, the bullet entered through the left side of Stephanie’s neck. Dr. Philip Keen told police he was calling the manner of death a homicide after learning Stephanie was right-hand dominant.

The report shows positive findings of gunshot residue on her left palm, not her right hand.

‘I don’t know what happened’

Peterson told police that she shot at him once before a struggle for the gun and the fatal shot.

"We know simply based on the one-sided information that his statement is that she shot at him so that would explain gunshot residue period. Now, whether that gunshot residue is present from what he followed up as an answer to what happened being that, during the struggle, when that weapon went off, that there would be additional gunshot residue only makes sense. There’s no way for us to separate the first shot from the second shot if you will," Leon explained.

On Sept. 3, 1993, less than two months after the shooting, Peterson met with investigators for his last interview, and this time, his story changed.

This time, Peterson told police he saw Stephanie fall from a distance.

The month prior, investigators simulated the shooting with a model of a .44 magnum revolver. They found a woman of similar size and frame to attempt the same angle of the bullet’s entry through the left side of the neck.

There was difficulty pulling the trigger with a one-handed double action. It finally worked with a simulation of a struggle between two people.

The medical examiner also told investigators he believed Stephanie was in a "defensive posture" when she was shot based on gunpowder residue on her left palm.

"We put the evidence together, and it’s like the evidence is showing that one, she did not commit suicide. There was no one else present in the room, correct?" a detective asked Peterson. Near the end of the interview, The detective confronted Peterson about his lack of cooperation.

"I think we’ve been more than understanding with you. You’ve canceled appointments with us. We’ve scheduled appointments with you, OK. I’ve tried calling you, you’ve moved. You promised me you’d give me your phone number as soon as you got a new one, and then you had a phone you just didn’t recall it. You never returned that. We’ve bent over backward to show that it was an accident for you," the detective told Peterson.

A polygraph test or re-enactment with Peterson himself never happened. He did give consent for a search of his house.

In December 1993, Sedona PD learned the Yavapai County Attorney’s Office did not see enough sufficient evidence to present to a grand jury, despite "inconsistencies in the suspect’s stories."

A letter from the office said Peterson's confusion over the facts could be the result of "trauma" or "wishful thinking."

Did alcohol and talk of Peterson's upcoming trip to New York contribute to the alleged fight?

"There was a lot of antagonism between the two of them with him going, money being spent, so that night, that could have been a source of conflict with them," Leon said.

The original police report reveals Stephanie told her mother more than 50 times that Peterson abused her physically and emotionally.

Wendy says her sister planned to leave for good.

"I think this was the end of the road for that relationship," she said. "She was thinking about leaving him. My mother offered her home."

Peterson denied the abuse in the '93 interview.

"I never in six years ever raised a hand to her," he claimed.

At exactly what time did Stephanie's life end? Peterson's phone bill shows a call was made to a location in Glendale at 1:36 in the morning – lasting a minute. At 1:40 a.m., he called 911.

Leon’s follow-up narrative on the case boils down to her saying, "I cannot find any further leads on this case, short of a confession from Peterson making an admission …"

When Wendy was asked if she feels she'll get justice for her sister's death, she is hopeful.

What does she think is stopping this case from moving forward? She says, "I think if they did their job, it’s an open and shut case. I really truly do."

As for Stephanie's daughter, she's not giving up on getting justice.

"I’m not gonna give up on this anymore. I will fight the system. I will not let this go. My mother did not commit suicide or have an argument and try to shoot her boyfriend. That is not what happened," Nikki said.

FOX 10 has reached out to Peterson, just like Sedona PD has, and we have not heard back. We visited his Phoenix home, but he wasn’t there, and he has our information.

The Yavapai County Attorney's Office provided us with a new statement on this case, saying, "I am in receipt of your request to speak to the County Attorney about the ongoing Stephanie Wasilishin death investigation. It is our position that open, active investigations should generally not be commented on by this Office because of our ethical obligations. I understand that is probably not the answer you were looking for, but I hope it helps some."