Footage of an incident that occurred during a peaceful protest in Gloucester County has gone viral and left a community outraged.

The incident, which immediately inspired community backlash, happened in the rural suburb Franklinville on Monday.

In the video, submitted by a FOX 29 viewer Wes Simmons, several counter-protesters are seen on the side of the roadway.

Video from the protest shows a group of men shouting at the protesters from the side of the roadway and displaying signs that read "All Lives Matter." 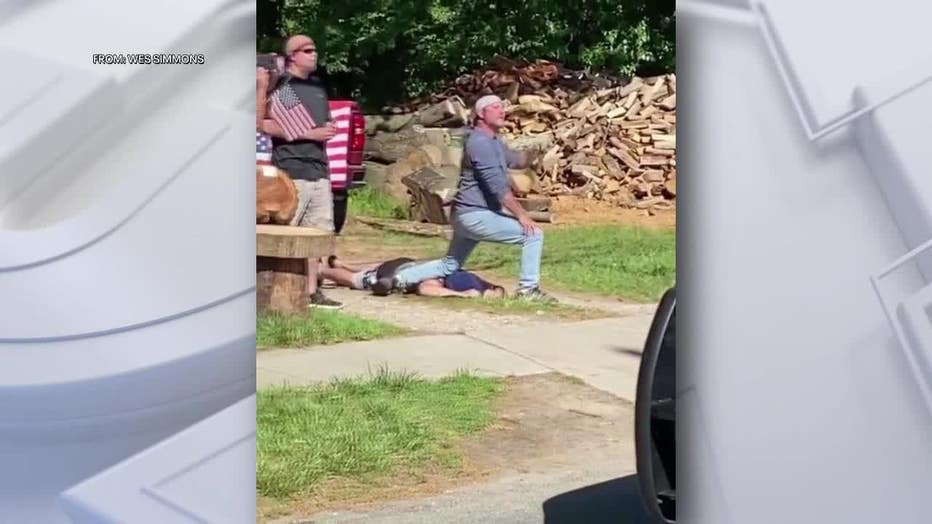 One man shouting at the peaceful protesters and their police escort is kneeling on another person's neck, in an echo of the way George Floyd spent his final moments of life.

In a second video from the incident, the man kneeling can be heard shouting, "You don't comply, that's what happens."

The peaceful protest was organized to advocate for justice for George Floyd and show solidarity with other national movements seeking to honor his memory.

Floyd's death while in the custody of Minneapolis Police on Memorial Day sparked international movements denouncing police brutality and calling for reforms.

Simmons told FOX 29 that peaceful protesters were marching from the community center to the police station to demonstrate the need for meaningful change.

According to multiple sources in town, the men are the DeMarco brothers, Jim and Joe, who are township residents.

There was no answer at the home of Jim DeMarco when FOX 29's Jeff Cole knocked on Tuesday, and the mother of the men said Joe wasn’t available but defended her sons.

"My sons are good people, come from a good family," she said. Cole asked, "Would they have done this?" She replied, "You have to ask them I would have no idea what they would do."

She declined to look at the video and argued if it was her sons they were in “support” of the Black Lives Matter movement.

"The Franklin Township Committee and the Franklin Township Police Department are appalled and saddened by the revolting actions of certain individuals after Monday’s locally organized peaceful march. This is not who we are as a Community. We support the goal of this march, which is to spread awareness and to ensure a better future for all of us. Without an understanding and mutual respect for all individuals, we can never aspire to create a united community based upon the idea of human respect and dignity for all," the township committee and police department said in a statement Tuesday.

The incident, which immediately inspired community backlash, happened in the rural suburb Franklinville on Monday.