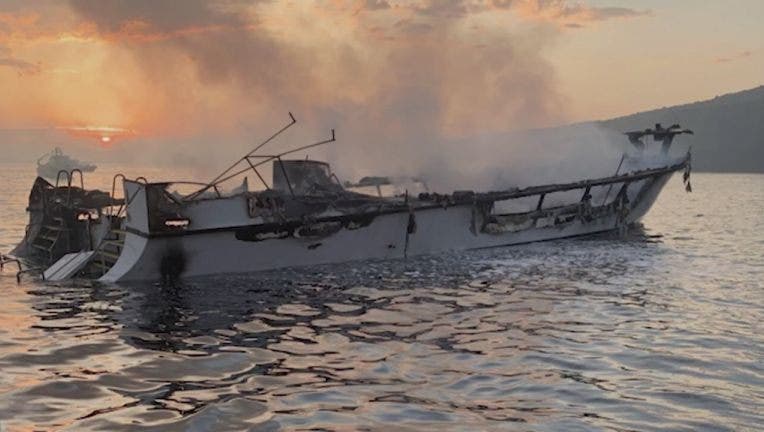 LOS ANGELES - The lack of a required roving night watchman aboard a scuba dive boat delayed the detection of a fire that killed 34 people off the coast of Southern California, federal investigators said Tuesday.

The predawn fire aboard the Conception is one of California’s deadliest maritime disasters, prompting both criminal and safety investigations. The Sept. 2, 2019, tragedy killed 33 passengers and one crew member on a Labor Day weekend expedition near an island off Santa Barbara.

Investigators told the National Transportation Safety Board that because the boat burned and sank, they couldn’t determine what caused the fire. But they found that it began toward the back of the main deck salon area, where divers had plugged in phones, flashlights and other items with lithium ion batteries that can spread flames quickly.

Court documents say federal criminal charges against the boat’s captain are imminent, though that probe is separate from the NTSB’s proceedings.

The federal regulatory agency does not have enforcement powers and must submit its suggestions to bodies like the Federal Aviation Administration or the Coast Guard, which have repeatedly rejected some of the board’s safety recommendations after other disasters.

The Coast Guard has, however, issued additional safety recommendations following the Conception fire, such as limiting charging of lithium-ion batteries and the use of power strips and extension cords.

Five crew members, including Capt. Jerry Boylan, were asleep above deck when the fire broke out — an apparent violation of Coast Guard regulations requiring a roving watchman — and managed to escape by jumping into the water. Authorities said they repeatedly tried in vain to save the others.

RELATED: All 34 victims of the deadly 'Conception' boat fire identified

Families of 32 victims also have filed claims against the boat owners, Glen and Dana Fritzler, and the boat company, Truth Aquatics. In turn, the Fritzlers and the company have filed a legal claim to shield them from damages under a maritime law that limits liability for vessel owners. Court filings show they have offered to settle lawsuits with dozens of victims’ relatives.