PHOENIX - A massive house party that a Goodyear homeowner never asked for sparked an investigation into how this party got so out of hand in the first place – and how this is just one of many of these instances.

Police had to break up the Feb. 19 party of hundreds at a million-dollar property where young people, mainly teens, took over a vacant structure at a home.

How did the suspect set up this pop-up party? Could it happen at your home?

Through a records request, FOX 10 obtained never-before-seen footage of the chaos that broke out after a party was crashed by officers.

Goodyear Police body cameras show what happened on that fateful February night in a pricey neighborhood within Sarival Gardens.

"This house is for sale and there’s a huge party here nobody’s supposed to be here," an officer is heard saying before crashing the party.

"Damn officer, you gotta shut it down?" a teen is overheard saying.

"What a freaking nightmare," an officer said. "Unbelievable," another said.

"All of them are either high or drunk."

The party goers left the RV garage at the home, some taking leftover beers with them. Neighbor Brian Franks is livid at the situation.

"You’re letting all these kids go?" Franks asked the police.

"There’s six of us and there’s 150 of them and there’s only so much we can do," an officer replied.

"They’re all gonna get in their car and gonna drive (expletive) drunk and stoned? Unbelievable," Franks said.

Another officer gets the impacted homeowner on the phone. She was out of town and says she accepted a buyer’s offer for the house.

The "for sale" listing had been online for a couple of weeks.

Her Ring cameras caught suspicious activity just days before the party. She explained, "Two guys came at first, and they were the ones kinda scouting around, and they broke the lights in the back where the cameras are."

Initially, Goodyear PD told FOX 10 that only one party goer was arrested on suspicion of DUI that night.

Franks let officers know of his frustration as a neighbor, seeing these teens casually leave the party.

"(Expletive) them kids, man. They just literally broke into that house. You guys are the cops."

How did word get out about this party? 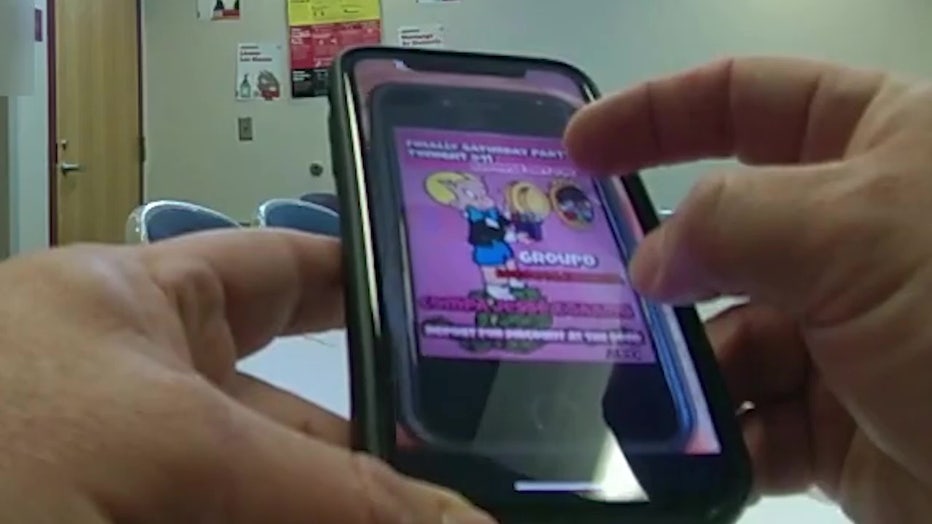 Social media is the key to bringing in a crowd.

In Arizona, a Surprise homeowner was aware of a party that was about to take place as his family recognized their own address on a Snapchat post while out of town. But, before police arrived, the homeowner, Michael, says the teens had broken in and cut the power.

"Someone's in my house, you just destroyed the sanctity of my home, and then you're bound because I'm 300 miles from the house and there's only so much I can do via phone," he said.

Michael’s home was also on the market at the time.

Realtor Sonia Moreno says pop-up parties aren’t just an invasion of privacy, but the aftermath is costly as far as cleaning up the mess and property damages.

"I think the party host just wants to make a name for themselves," Moreno said. "It’s kind of like a challenge, something that excites them. They don’t really care if it goes on very long. I think it’s just a matter of them being able to execute the party."

If you are selling a home that’s now vacant, Moreno says don’t let your guard down and recommends "talking with your agent making sure that they can even make a good relationship with your neighbors."

She adds to make "sure you have a security system in place, that would help. Of course, cameras would help and just no mail left out. No newspapers out in the front lawn."

‘There’s a level of virality that exists’

Just days after the pop-up party, Goodyear Police Det. Travis Roller searched for leads as band members hired by the organizer provided more information on what they saw.

"When we got there, there was probably like six, seven dudes in the front, there were like vests too … like vests like that, they had guns and stuff," explained one of the band members.

Det. Roller took a good look at the flyer that brought in the flood of party goers.

Vincent Orleck is the president of Social Media Club Phoenix and says communication platforms of choice for Gen Z are easily Snapchat and Instagram. So when a flyer is shared with the target demographic, it spreads like wildfire.

"There’s a level of virality that exists, but it’s much more at a grassroots level so just going viral, it doesn’t have to be 100,000, a million … it can be something that gets into a thousand people’s hands, and it’s on a viral basis in that sense where I just reached a thousand people and now there’s that potential for that thousand people to reach exponentially more to their networks," Orleck said.

This band member’s account of the night includes the digital trail for the pop-up party and leads police to the suspected organizer. 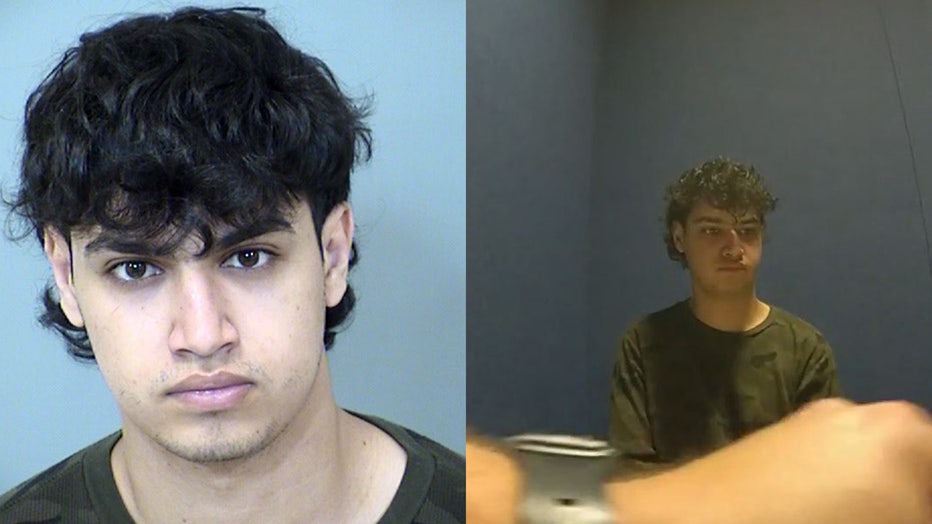 'We just doing this for fun'

Mustafa explains how he found the home.

"From the house for sale, we find from there, and we just went there and check the house, so we throw party there," Mustafa said.

Simply the internet, Mustafa says, that’s how he picks a home for sale. Scouting the property to make sure it’s vacant.

Det. Roller asks, "What’s the deal with these parties? I mean I know you charge people to get in right? How does it work?"

Mustafa replies, "We just doing this for fun, to throw party and having fun. That’s it."

He says he charges $15-$20 for guys and girls usually don’t pay. The money is used to pay for the band and security.

When asked what’s the purpose of the security?

Mustafa answers, "Because we don’t want anyone to get hurt at party, ya know?"

Mustafa is accused of criminal trespass, disorderly conduct, contributing to the delinquency of a minor and criminal nuisance.

The door to the RV garage was kicked in and police say Mustafa and a minor planned the pop-up party together.

The juvenile who police say worked with Mustafa was also arrested.

Ultimately, the Maricopa County Attorney’s Office advised Goodyear PD that the charges against Mustafa should be submitted as misdemeanors and be prosecuted by the city.

The case is now pending in Goodyear’s municipal court.

The question is, what stops other pop-up party organizers from doing this again in Valley neighborhoods?

Det. Roller says to Mustafa, "That’s the (expletive) that can happen at these parties and everyone’s driving home drunk and who knows if they get in an accident and kill family members. You don’t think about that (expletive) do you? Right? This is serious, man."

FOX 10 reached out to Goodyear Police to dive a bit deeper into questions regarding this story.

Q: When did Goodyear PD submit the case against Mustafa for prosecution and was it sent to MCAO?

A: Mustafa was arrested on 04-07-2022, and booked into Maricopa County Jail. All of the remaining associated paperwork/ charging documents were submitted to MCAO the following day 04-08-2022.

On 04-13-2022, I learned the Maricopa County Attorney's Office (MCAO) declined prosecution on the submitted charges, and requested the charges be referred to the City Prosecutor.

On 04-19-2022, Salim Ghulam Mustafa was long-formed on the following charges to the Goodyear City Prosecutor:

Q: Det. Roller tells Mustafa he knows he has thrown several other house parties using social media as an advertisement. Does he believe Mustafa targeted vacant homes for sale or did he mostly rent a property for the night?

A: During interviews with Mustafa and the juvenile arrestee, along with what was gathered from social media, Detective Roller learned that it appeared they mainly held these parties at people’s properties per the property owner’s (or someone who lived at the property) request, or they rented homes to throw the parties.

Q: Why were party goers including dozens of minors allowed to leave the party, possibly and most likely under the influence?

A: Several Goodyear Officers responded to the party where it is estimated that over 100 people were present. Officers safely broke up the party. A criminal report was taken and a DUI arrest was made on a driver leaving the party. There were no injuries and detectives followed up on the case resulting in making an arrest.

Q: Is there a party throwing trend in the city of Goodyear when it comes to vacant homes?

Q: Are these million dollar, luxury homes being targeted? Not in Goodyear.

Q: There was an armed guard in a neighborhood. Was he ever interviewed and believed to be a licensed security guard?

Arrests made in illegal party at vacant Goodyear home