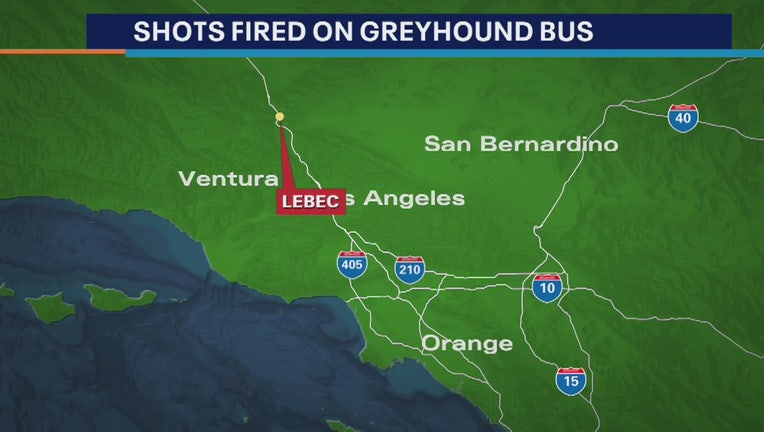 LEBEC, Calif. - A gunman early Monday opened fire on a Greyhound bus that was traveling northbound on the 5 Freeway over the Grapevine Pass, leaving a Columbian woman dead and five people injured, officials said.

The shooting was reported just before 1:30 a.m. on the bus that was bound for San Francisco from Los Angeles, the California Highway Patrol said.

According to CHP, the suspect on the bus had a black handgun and shot several passengers.

Once shots were fired, the driver pulled to the right shoulder of the road and the gunman got off the bus voluntarily. The bus driver then traveled to the next exit and stopped at the Valero gas station located on Grapevine Road in Lebec so the victims could receive medical attention.

One victim was transported to a hospital by an air ambulance and four victims were transported to local hospitals by ground ambulance. Two of the victims are currently listed in serious condition, officials said.

One of the six victims, identified Tuesday by the Kern County Sheriff's Office as Lurbis Elena Vence, suffered fatal injuries. She was 51 and a resident of Molino, Colombia.

"Our thoughts and prayers go out to everyone and every family member impacted by the incident today. We are gathering details and will assist the Kern County police in every way possible during their investigation. What we do know at this time is that the incident involved schedule 6848-1, traveling from Los Angeles to San Francisco.For the most up to date information regarding the status of the investigation, please contact the Kern County police department directly."

The scene is currently stable and there is no longer a threat, the CHP said.

The suspect, who deputies located on the shoulder of the freeway where he was dropped off, was taken into custody without incident.

Kern County Sheriff's deputies taped off the gas station as they continued to conduct the investigation.

The exact number of passengers remains unknown, but was estimated to be several dozen, Pennings said.

Arrangements were made to get the remaining passengers to their destinations.