Standing at a solid 209 feet, the Grizzly Giant is the second largest tree in Yosemite, and one of the most photographed. Video: Yosemite Fire and Aviation

Hundreds of the iconic, larger-than-life sequoias in Yosemite National Park are under threat as the Washburn Fire continues to burn.

Efforts have been made to protect the trees, including wrapping some of the massive trunks in fire-resistant foil and setting up sprinkler systems in the famed Mariposa Grove to retain moisture. In particular, a set of sprinklers was set up around the park’s most notable tree — and perhaps one of the most famous trees on Earth — the 3,000-year-old Grizzly Giant. 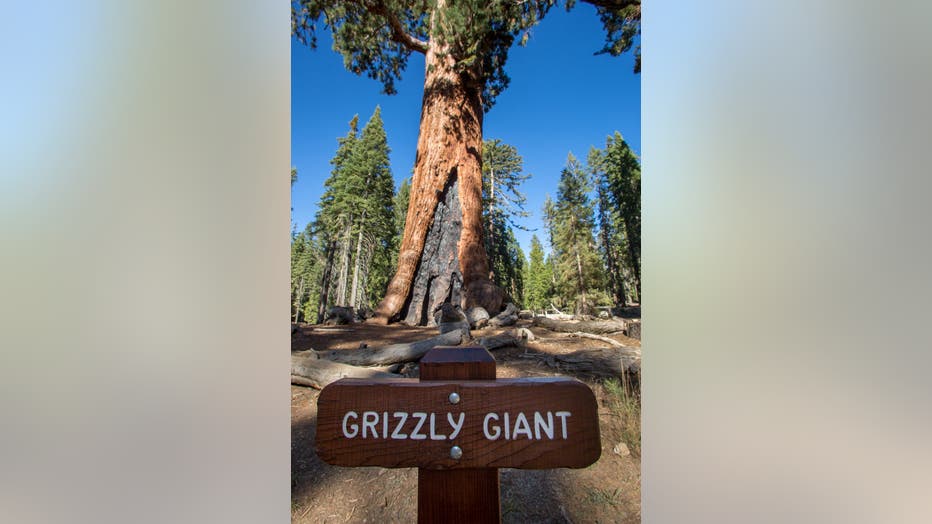 FILE PHOTO: The burned and stunted Grizzly Giant is viewed from a boardwalk at Yosemite's Mariposa Grove of Giant Sequoias on October 6, 2019, in Yosemite Valley, California. (Photo by George Rose/Getty Images)

The Grizzly Giant is the second-largest tree in the park, standing at 209 feet tall. That’s taller than The Cinderella Castle at Disney Land (189 feet) and The Leaning Tower of Pisa in Italy (186 feet).

"We’ve got a sprinkler system set up around it and we are trying to give it preventative first aid, really," Garrett Dickman, a forest ecologist, told FOX 2 KTVU. Sprinklers keep the area wet, cool flames, and increase humidity. Ground crews have been removing logs and other pieces of large debris that could act as fuel.

"We really don’t want to leave it to chance because this really is just such an iconic tree," said Dickman about the Grizzly Giant. 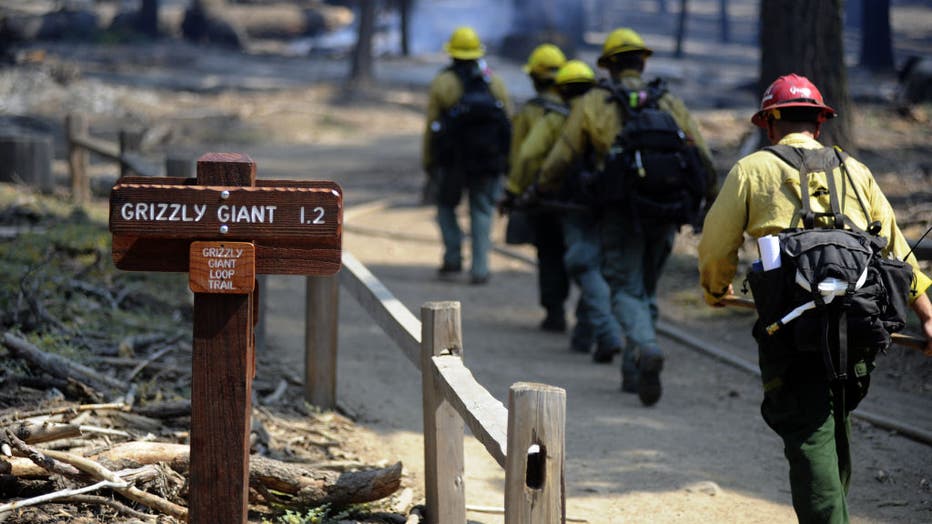 The fire broke out Thursday next to the park’s Washburn Trail. Smoke was reported by visitors walking in Mariposa Grove, which reopened in 2018 after a $40 million renovation that took three years.

The giant sequoias are native to only about 70 groves spread along the western slope of California's Sierra Nevada range.

"Fortunately, the Mariposa Grove has a long history of prescribed burning and studies have shown that these efforts reduce the impacts of high-severity unwanted fire," a National Park Service statement said.

The Washburn Fire is a threat to more than 500 mature sequoias in the park’s Mariposa Grove. Credit: ALERTWildFire via Storyful

Meanwhile, the fire also threatened a small community in Yosemite National Park, Wawona, which has been evacuated. Officials said about 150 people lived there, in addition to being a lodging point for hundreds of tourists.

California firefighters gained ground Monday in the battle against the wildfire.

The fire so far had scorched about 4.2 square miles (10.9 square kilometers) but was 22% contained as of Monday night, according to an incident update.

The area in the southern portion of Yosemite was closed to visitors but the rest of the national park remained open.

The Associated Press and FOX 2 KTVU contributed to this report.