GLENDALE, Ariz. - A young Arizona Cardinals fan was discouraged after he lost his signed jersey last weekend, but that all changed thanks to Kyler Murray.

A family friend then took to Twitter, asking for any help in trying to find the lost jersey, and a few hours later, the Cardinals' star quarterback replied with a picture of a new jersey, signed by many members of the team.

"Alright @AZCardinals #redsea, we need your help. Posting on behalf of my friends son who's autographed @K1 jersey got taken at the red and white practice. He is heartbroken. If you have any leads please DM @Mgumowski33."

"Jersey on the way bro!" Murray replied in a tweet.

"I checked Twitter, I saw everything, like, ‘oh wow,’ I was jumping up and down, I was screaming, I almost cried in joy," Gumowski said. "I was just real happy just to know they came back and tried to do something after that."

Zachary says the team reached out to him personally, and he will receive his new signed jersey on Tuesday. 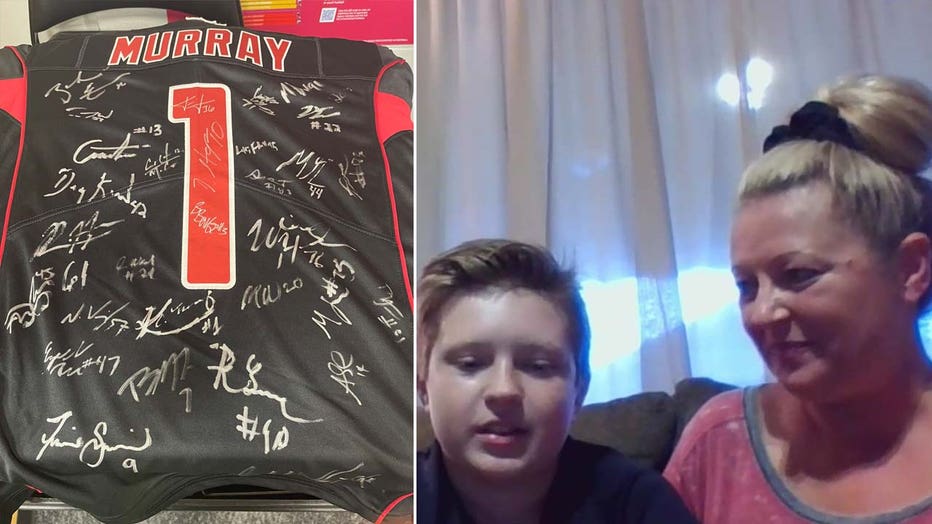 12-year-old Zachary Gumowski was discouraged after he lost his signed Arizona Cardinals jersey during the team's red and white practice, but that all changed when QB Kyler Murray gifted him a new jersey signed by the entire team. (@K1/Twitter and KSAZ)