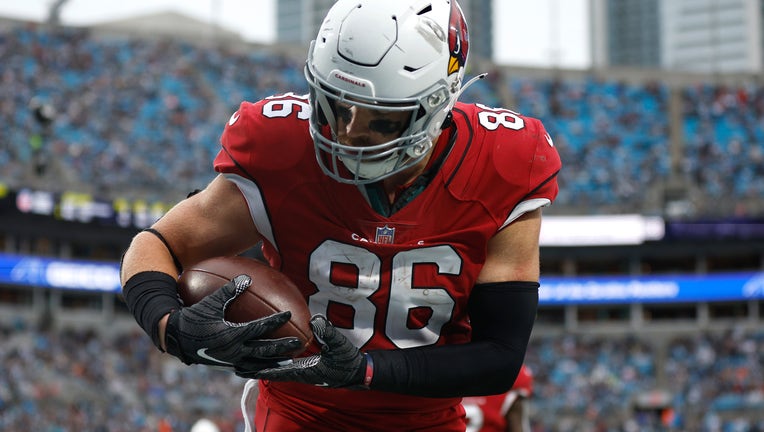 CHARLOTTE, NORTH CAROLINA - OCTOBER 02: Zach Ertz #86 of the Arizona Cardinals reacts after a touchdown during the third quarter against the Carolina Panthers at Bank of America Stadium on October 02, 2022 in Charlotte, North Carolina. (Photo by Jare (Getty Images)

He’s just glad they managed a strong finish on Sunday.

Murray threw for 207 yards and two touchdowns and added another score on the ground as the Cardinals overcame another lackluster first half, rallying with 16 fourth-quarter points to beat the Carolina Panthers 26-16.

"It can’t last forever," Murray said. "I’m confident we can figure it out. It’s just about us being better."

Marquise Brown caught a 23-yard touchdown, Zach Ertz hauled in a 2-yard TD catch and Murray ran for a 4-yard score as the Cardinals held a 17-minute advantage in time of possession and beat the Panthers for the first time in the last seven meetings.

The 6-foot-1 Mayfield had five passes batted at the line of scrimmage and was off the mark on several other throws. He’s had an NFL-high 11 passes batted down.

After a fourth deflection ended a fourth-quarter drive, Mayfield punched the air in frustration as boos erupted from the Bank of America Stadium crowd.

"I don’t care about the fact that our fans are booing, or what’s going on," Mayfield said. "When we figure it out and we win, it’s still going to be just us in the locker room — and that’s all we care about."

Mayfield has completed 54.7% of his passes this season with four touchdowns and three interceptions. He came into the weekend second-to-last in the league in total quarterback rating and Sunday’s effort isn’t going to help.

After the game, coach Matt Rhule was asked if the Panthers might consider benching Mayfield for Sam Darnold, who is eligible to come off injured reserve this week after missing four games with an ankle injury.

"I don’t have any thoughts about anything moving forward," Rhule said. "We’re going to go back and watch the tape and try to get these things corrected. Usually on Mondays I can give you better answers of what we will do going forward."

After trailing 10-3 at half, the Cardinals took their first lead in regulation this season on Matt Prater’s 39-yard field goal with 11:22 remaining in the game.

Three-time NFL Defensive Player of the Year J.J. Watt, playing just four days after having his heart shocked into rhythm after going into atrial fibrillation, then deflected Mayfield’s pass, which Dennis Gardeck intercepted and returned to the Carolina 5.

Two plays later, Murray scored on a designed rollout for a 20-10 lead. Murray found Brown on a corner route to help put the game away.

Watt said he was cleared by doctors to play and didn’t want to let his team down.

"Once my heart was re-set, they said, ‘You’re fine if you feel comfortable,’" Watt said. "If I was sitting at home watching the boys play knowing that they said I was fine to play, I would’ve felt weird. I just did what I know."

The Panthers had won 14 of 19 overall against the Cardinals coming into the game, including the past six by an average margin of 35-17. But the Panthers were 2 of 10 on third downs and couldn’t get anything going on offense.

Carolina’s only touchdown in the first 55 minutes of the game came when Frankie Luvu intercepted Murray’s pass and returned it 33 yards for a touchdown to give Carolina a 7-0 lead early in the second quarter.

"Our defense played their tails off and kept us in it the first half," Arizona coach Kliff Kingsbury said. "The offense was struggling once again. I thought in the second half, it all came together and played at a high level."

Cardinals right guard Will Hernandez was ejected in the fourth quarter for pushing an official in the back following a dust-up between the two teams.

Cardinals: LG Justin Pugh (elbow) and LB Nick Vigil (hamstring) left the game in the first half and did not return. ... Prater did not attempt an extra point late in the game because of a hip injury.

Panthers: Safety Jeremy Chinn left in the first quarter with a hamstring injury and did not return.

Arizona Cardinals' J.J. Watt plans to play days after having 'heart shocked back into rhythm'

JJ Watt did not practice on Wednesday or Thursday. His status was listed as questionable for the Panthers game because of a calf injury.

The Cardinals fell into an early hole for the third straight game and failed to score a touchdown in a 20-12 loss on Sunday, their seventh straight at home to the reigning Super Bowl champions.