AUSTIN, Texas - UPDATE: The charges against the 15-year-old and 17-year-old have since been dropped by the Travis County District Attorney's Office. Authorities say they are looking for a new suspect in connection to the deadly 6th Street shooting that happened on June 12.

A second suspect has been arrested for the mass shooting in downtown Austin that left one dead this weekend. The 17-year-old was arrested by the Killeen ISD Police Department at Harker Heights High School while attending a summer school class earlier today.

Also arrested in connection to this incident is a 15-year-old juvenile booked for deadly conduct.

The shooting left one dead and 13 others injured. One person remains in critical condition.  An undetermined amount of shots were fired during the shooting, according to Austin police.

Police say they responded to reports of multiple shots fired at around 1:30 a.m. near the 400 block of East 6th Street.

When officers arrived they found a large crowd of people in the area and initially located several victims who had sustained gunshot wounds and were hurt. Officers immediately began life-saving measures on multiple victims.

Chacon says as shots rang out, officers were already in the area and jumped into action.

"It was clear as people we're running out of that scene, our officers were running in," said Chacon.

The chief says each officer is equipped with a first aid kit and a tourniquet to be used in dire situations like this. All that equipment was exhausted Saturday morning helping the victims.

"It has become very clear to me that our officers were just amazing this morning in the actions that they took, how quickly they took them. And the fact that I truly believe that they saved lives," said Chacon.

Interim Chief Chacon says most of the victims are believed to have been innocent bystanders.

Witnesses share their thoughts on the Downtown Austin shooting

We're learning more about how Saturday morning's shooting unfolded from those who were there or nearby. Some were visiting from out of town. Some lived just steps away.

APD confirmed that 25-year-old Douglas John Kantor has died from his wounds.

Kantor's family has issued a statement:

"Doug J. Kantor, originally from Airmont, New York, had recently been living in Michigan after completing four years in Michigan State in computer engineering. Soon after getting his bachelor's degree, he was employed with the Ford Motor Company. While continuing his education at the University of Michigan, he bought his first house and received his master's degree in business. He motivated everyone he came in contact with, was a team player, and advanced quickly in the IT department at Ford working as a product manager. He also developed a website for his brother and father's air conditioning and heating business. He was looking forward to marrying his high school sweetheart of 10 years and starting a family. He was loved by all who knew him and had an infectious smile that would light up any room. He was loved by his family, friends, and everyone who met him. This senseless tragedy has put an end to all his dreams." 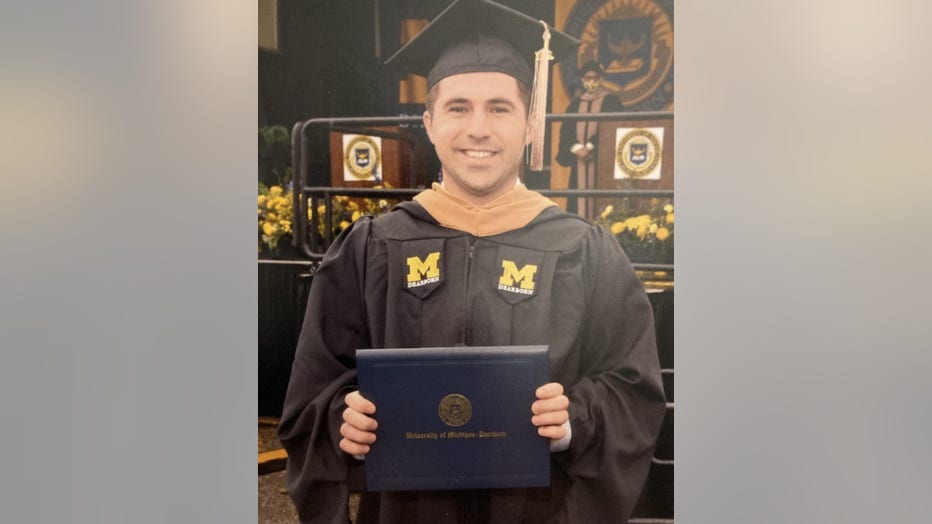 APD has confirmed that 25-year-old Douglas John Kantor has died from his injuries after a mass shooting in Downtown Austin. (Nick Kantor)

The last time Austin saw an attack as serious as this one was back in 2014, during South by Southwest when a man drove through police barricades into a major crowd killing 2 and injuring 23.

The chief says luckily they had the officers to respond this time, but their staffing issues are still a huge problem. APD is really relying on this new cadet class to help get more officers on patrol.

"I'll just tell you that is making it very hard for us to continue to staff at these levels," said Chacon.

APD is working with the Texas DPS, the FBI...And ATF to find those responsible for this mass shooting in Austin.

Detectives are asking anyone with information or video of the incident to call APD Aggravated Assault Unit at 512-974-TIPS, utilize the Crime Stoppers tip line at 512-472-8477 (TIPS), or the Crime Stoppers app. You may remain anonymous.

Central Texas organization We Are Blood posted on Facebook Saturday that they will be using blood and platelet donations to assist those injured in the shooting.

The group is also asking for donations into the next week and beyond to replenish the blood supply.

Texas Governor Greg Abbott released a statement in response to the shooting saying, "The Texas Department of Public Safety is working closely with Austin Police to respond to this shooting and ensure that the perpetrators are captured and punished to the fullest extent of the law."

Austin Mayor Steve Adler posted on Twitter thanking "law enforcement, firefighters, and EMS personnel for a quick response" and also addressed the "uptick in gun violence" in the post's thread.