New uncertainty hangs over the Democratic presidential primary as 10 candidates meet on the debate stage once again. There are seven big questions heading into the debate, to be carried on MSNBC.

WASHINGTON (AP) - New uncertainty hangs over the Democratic presidential primary as 10 candidates meet on the debate stage once again.

No longer is there a clear front-runner. The fight for African American voters is raging. And there are growing concerns that impeachment may become a distraction from the primary. Those issues and more will play out Wednesday night when the Democratic Party’s top 10 face off in Atlanta just 75 days before primary voting begins.

Seven big questions heading into the debate, to be carried on MSNBC:

WHO IS THE FRONT-RUNNER?

Turbulent polling across the early voting states has created a murky picture of the top tier of the 2020 class. As much as Joe Biden is still a front-runner, so are Elizabeth Warren, Pete Buttigieg and Bernie Sanders. The question is who gets the front-runner treatment in Wednesday’s debate. Warren was under near-constant attack last month as a new leader. Will Warren continue to face the heat, or will the ascendant Buttigieg or weakening Biden take more hits?

HOW WILL OBAMA PLAY?

Former President Barack Obama, the most popular Democrat in America, inserted himself into the 2020 primary in recent days by warning candidates against moving too far to the left. His comments create a challenge for Warren and Sanders and an opening for moderates Buttigieg, Biden and Amy Klobuchar to attack. At the same time, Obama’s involvement offers a powerful reminder of the massive role African Americans will play in the presidential nomination process. As we know, all candidates not named Biden have serious work to do when it comes to winning over the black vote. Race and Obama’s legacy could play a major role in shaping the action.

WHAT SAY YOU, IMPEACHMENT JURY?

They have all come out in favor of impeachment — some more aggressively than others — but it’s noteworthy that five of the 10 Democrats onstage will serve as jurors in the Senate impeachment trial should the House vote to impeach President Donald Trump. It’s a complicated topic for Democrats. Some senators worry that a prospective impeachment trial will interfere with their ability to court voters early next year. Others fear that impeachment could hurt their party’s more vulnerable candidates in down-ballot elections next year. Either way, what the prospective jurors do or don’t say on the debate stage could be relevant if and when the Senate holds an impeachment trial, which is increasingly likely. 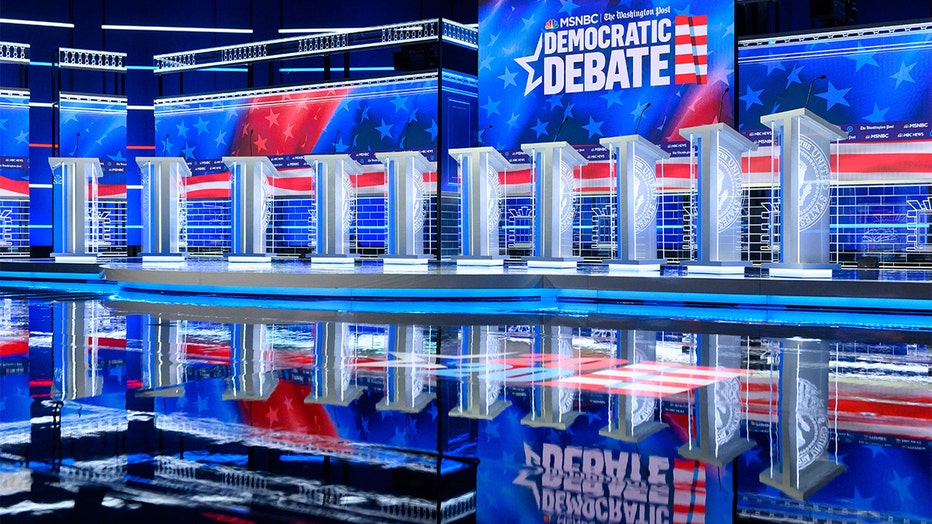 The debate stage is prepared for the upcoming Democratic Presidential Debate hosted by MSNBC and The Washington Post at Tyler Perry Studios in Atlanta, Georgia, on November 19, 2019. The debate is scheduled for November 20. (Photo by SAUL LOEB/AFP vi

WILL THEY BASH THE BILLIONAIRES?

Never before has wealth been under such aggressive attack in a presidential primary election. And with one billionaire onstage and another likely to join the field in the coming days, the billionaire bashing could reach new heights. Tom Steyer has largely gone under the radar, but the even wealthier Michael Bloomberg has generated tremendous buzz as he steps toward a run of his own. Of the two, only Steyer will be onstage, but expect Bloomberg’s shadow in particular to generate passionate arguments about wealth and the role of money in politics.

WILL SOMEONE STAND UP FOR THE ESTABLISHMENT?

Biden continues to be the favorite of many establishment Democrats, but his underwhelming candidacy has created an opening for another pragmatic-minded Democrat to step up. That’s why former Massachusetts Gov. Deval Patrick and Bloomberg are moving into the race. Buttigieg stepped aggressively into the establishment lane in the last debate, but many donors and elected officials remain skeptical of the 37-year-old small-city mayor’s chances. The opportunity is there for lower-tier candidates including Kamala Harris, Klobuchar and Steyer.

DOES SHE HAVE A PLAN FOR THAT?

No single issue has dominated the initial Democratic primary debates more than health care, and it’s safe to assume that will be the case again Wednesday night. And no one has more riding on that specific debate than Warren, who hurt herself last month by stumbling through questions about the cost of her single-payer health care plan. Given that policy specifics make up the backbone of her candidacy, she can’t afford another underwhelming performance on the defining policy debate of the primary season. Expect the policy-minded senator to have a new strategy this time around.

CAN THEY SAVE THEMSELVES?

New Jersey Sen. Cory Booker, Hawaii Rep. Tulsi Gabbard, businessman Andrew Yang and Steyer are under enormous pressure to break out given their status as the only candidates onstage who haven’t yet qualified for the December debate. They likely won’t have the same number of opportunities to speak as their higher-polling rivals, but these are dire times for the underdogs. They need to do something if they expect to stay relevant in the 2020 conversation.