Some call it the future of firefighting, and Valley firefighters got a chance to see it up close on Friday. FOX 10's Stephanie Olmo reports.

PHOENIX - Valley firefighters got a look at the future of firefighting on Friday.

It's a first-of-its-kind firefighting truck that made a pit stop in Arizona.

The fire truck is quiet, fast, can stop in an instant, and it's all-electric.

"The fire truck was built and designed not just to be environmentally friendly, but to be firefighter friendly, so behind us right now, the truck is idling. We can stand right next to it. It's running on batteries," said Michael Todd with Rosenbauer & Velocity Fire Equipment Sales.

The truck is a battery-electric vehicle, with a backup plan.

"We have batteries on board that give it about a two-hour operation of driving and pumping, but not to fear. If the battery goes low, we have an onboard range extender that is a BMW product. It will kick on and continue to charge the battery and operate the fire truck just like a normal fire truck that we see today."

The truck is able to speed up to 68 mph (~109.44 km/h) which is the standard in the U.S., and there are no side mirrors, as cameras installed on the car provide a much wider view.

"Every one of the senior firefighters who has seen this fire truck today, when they come off of this one, immediately you kind of see the light bulb go on in their head," said Todd.

The new electric fire truck has seen the world, and there are some fire departments stateside that have already made purchases. The first American truck is expected to roll out late this year.

"Based off the feedback we've had around the entire Western United States where we've been, this has been absolutely received very well by everybody, and this is the future," said Todd. 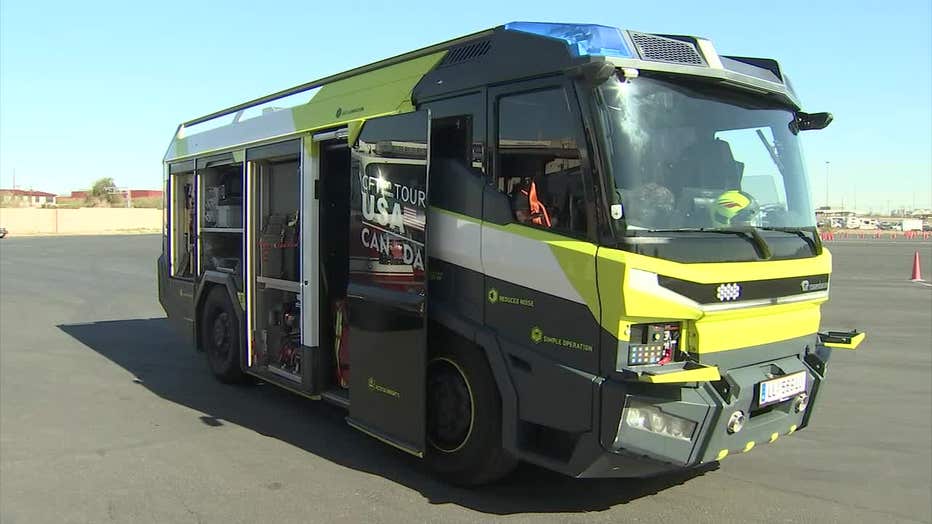