SPRINGDALE, Utah - An Arizona woman has been found dead after she was swept away by floodwaters in Utah’s Zion National Park as strong seasonal rainstorms hit parts of the U.S. Southwest several days ago.

On Aug. 23, the national park announced that responders located the body of Jetal Agnihotri, 29, of Tucson. She was found in the Virgin River near the Court of the Patriarchs in Zion National Park and was pronounced dead.

"Our deepest sympathy goes out to the friends and family of Jetal Agnihotri," Jeff Bradybaugh, Zion National Park superintendent said.

Her death was announced a day later after it was confirmed by medical examiners. It’s the latest reminder of the dangers of hiking in the narrow red rock canyons in the southern Utah park during monsoon season.

In previous years, similar floods have caused walls of water as tall as buildings, engulfing vehicles, rolling boulders and tearing out trees. In September 2015, seven people drowned in a similar storm in the park and another 12 people died in a nearby town.

On Aug. 19, Agnihotri was hiking with friends through a well-known slot canyon called The Narrows when the group was swept downstream by flash floodwaters overtaking the Virgin River.

All the hikers except Agnihotri were found on high ground and were stranded until water levels receded.

Slot canyons in Zion National Park can be as narrow as windows and hundreds of feet deep in certain parts. They are among the destination’s most scenic and visited areas.

But flooding, this year and historically, can transform canyons, slick rocks and normally dry washes into deadly channels of fast-moving water and debris in mere minutes. The National Park Service said floodwaters had increased the amount flowing through the Virgin River by up to 8,229 gallons during the monsoonal rains that swept Agnihotri downstream.

Rain can turn hiking in the park deadly when the moisture runs off the desert landscape and quickly fills canyons with water, rocks and debris, especially during the summer when seasonal afternoon thunderstorms develop. The storms can lead to flooding in normally dry washes and in areas stripped of vegetation by wildfires that have plagued the drought-stricken region. Vegetation normally slows and partially absorbs precipitation.

On Sunday, an approximately 20-mile stretch of Colorado’s main east-west highway, Interstate 70, was temporarily closed because of the risk of flooding and mudslides from forecasted storms in Glenwood Canyon, where a wildfire burned in 2020.

Elsewhere in Utah, flooding in Moab, the gateway to Arches National Park, on Saturday night closed trails in the city on Sunday as crews assessed the damage. A video posted on the city’s Twitter account showed a creek gushing under a downtown bridge.

Park officials told people at the visitor’s center to wait there for hours because of flash flooding.

Authorities said several rivers and streams in New Mexico have nearly reached historic flood levels not seen since the 1960s due to recent heavy rainfall. 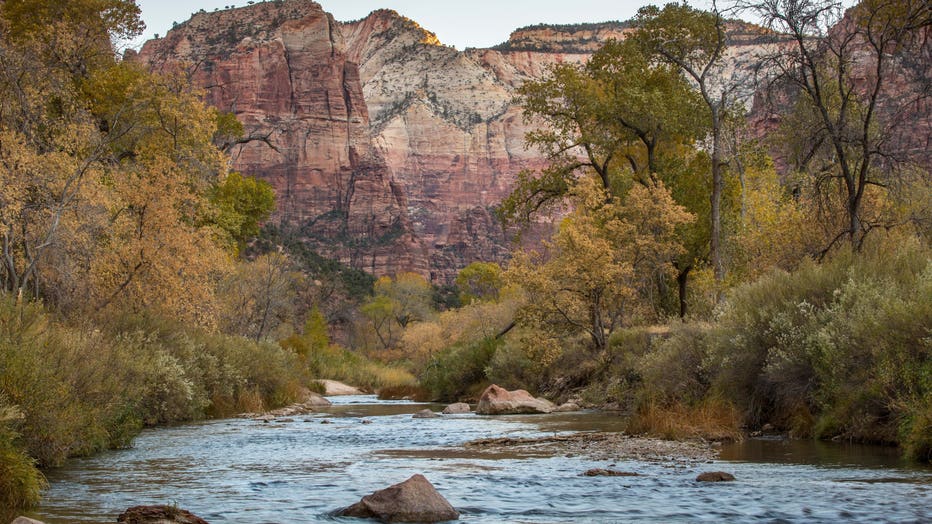 In Arizona, emergency crews rescued four hikers stranded in Sabino Canyon east of Tucson on Friday and helped 41 students and staff from Marana off school buses that got stuck in high water when the storms began to move in.

More than 3 inches (7.62 centimeters) of rain fell Saturday in the mountains northeast of Tucson, according to the National Weather Service.

MORE: Monsoon 2022: Parts of Arizona seeing more rain this season, according to meteorologist

The rain comes amid a drought that scientists say is the worst in the U.S. West in 1,200 years and aggravated by climate change. Colorado River reservoirs have fallen to historic lows as a result. Earlier this week, states that rely on the river missed a deadline for deciding how to cut the amount of water they use from the river.

For Nevada, recent storms have given the Las Vegas metro area its wettest monsoon season in 10 years.

"Most locales in Arizona, New Mexico, the California deserts, southern Nevada, and a few other scattered areas have measured at least 200 percent of normal (rainfall) over the past 2 months," the U.S. Drought Monitor said in a report issued on Aug. 11.

Associated Press writers Walter Berry in Phoenix and Colleen Slevin in Denver contributed to this report.

Authorities have been searching for days for an Arizona woman reported missing after being swept away by floodwaters in Utah’s Zion National Park as strong seasonal rain storms hit parts of the U.S. Southwest.