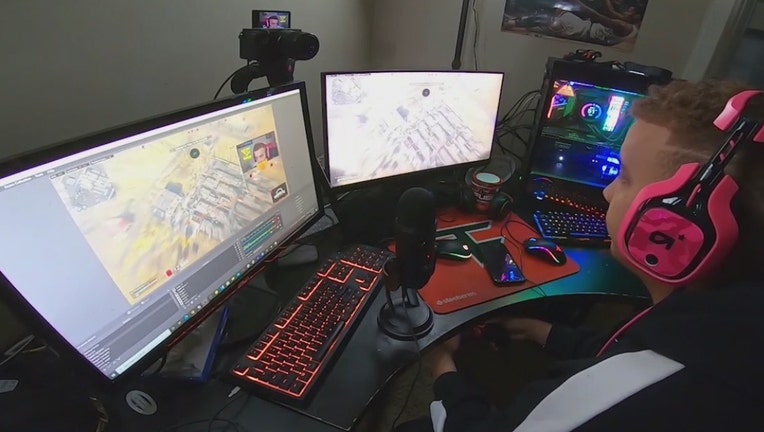 PHOENIX - The video game business remains a multi-billion dollar industry, but it's not just the developers who are profiting off the games.

Players are also profiting, and they are doing so by creating gameplay content online, and turning it into cash, and one Phoenix man is proving that it really does pay to play.

The part-player, part-creator combination has gained Lamberson millions of fans across the world, while also bringing in a stream of cash in the process.

Lamberson's passion for gaming started later in his life.

"I was really into basketball, that was my thing. I didn't really play video games growing up," said Lamberson. "It wasn't until high school that I discovered video games, and how addicted I was to it."

Lamberson says his love of gaming lead to a lot of early mornings and late nights, something that didn't go unnoticed by his father.

"You could just tell he had the drive for it," said Lamberson's father, Bill Lamberson. "He would be up early in the morning. four o'clock, I'd knock on the door, and he'd be playing video games. I told him as long as he's doing the video games and he's keeping up with this school and he's keeping up with his basketball, I'm fine with it, but I never knew it was going to be this big."

Just a few years ago, Lamberson was a state basketball champion for Arizona Lutheran Academy in South Phoenix. He eventually used that success on the court as a vehicle to push him harder in the gaming arena.

Lamberson's big moment came in 2020, when eSports organization FaZe Clan came calling, and asked for him to be a part of their team of creators.

"That was a dream come true because I had been following them for so many years," said Lamberson. "I watched them when I was in [New York] and [Los Angeles], looked up to a lot of those guys, and to be a part of the team is incredible."

While he tries to balance the pressure that comes with the success, Lamberson also wants to give back to those who have given so much to him. Lamberson is hosting a weekend Call of Duty tournament for smaller creators, and he plans to give the winner, a brand new car.

"I thought to myself why would I have a bigger creator in this when I know they could go buy a car? Why don't I do this for the smaller guys? They can not only get exposure from this tournament but get a car too, so it's a great opportunity and I want to give back," said Lamberson.

Lamberson admits that this type of content isn't for everyone, but he has some advice for anyone who might be thinking of following in his footsteps.

"I understand that people see this now and like, whoa, you make money playing video games, but at the same time, you have to have a passion for it. You have to have a passion for making content," said Lamberson. "So my advice is having a great group of friends around you. You can bounce ideas off each other because doing this by yourself is really, really tough. When you play video games, you play with your friends, so it's really relatable when you make content with other people that you really enjoy being around, so I think that's the biggest piece of advice I can give to somebody who wants to get into this, into streaming and into making content."