As COVID-19 deaths near 200K in US, professor talks lessons learned about the virus in Arizona

Some took to downtown Phoenix Sunday night for a vigil honoring those lives lost.

PHOENIX - Nearly 200,000 COVID-19 deaths across the United States leaves many health officials frustrated and overwhelmed as COVID-19 is now a leading cause of death for Americans.

"COVID has become the third leading cause of death after heart disease and cancer in this country with this 200,000 mark," says Dr. Shad Marvasti, Associate Professor and Director of Public Health and Prevention at University of Arizona.

He says these deaths could have been prevented.

"I think allowing the scientists and public health officials to lead and having more leadership by example seems to be a recipe for success around the world," Marvasti says.

The night of Sept. 20, all eyes were on the Arizona Capitol as local Democrats hold a light display to remember the people who lost their lives not only in Arizona, but across the nation due to complications from COVID-19.

With the pandemic, a lot of lessons were learned from mistakes made by leaders, Marvasti said.

"By now it's clear what we have learned locally in Arizona. We learned that it was a mistake to open back up when we did without any precautions and no limits and no masks wearing," he said.

Marvasti is hoping for a universal mask-wearing mandate, saying, "When you look nationwide, I think the US population estimates that 60% or so of folks wearing masks, and compare that to other places around the world and parts of the US where that percentage is higher. You see a huge difference in terms of the number of deaths. It's pretty clear that if we follow the guidelines, not only could we have prevented if we followed them sooner but now going into flu season, this is another opportunity for us to rely on what we have learned from science and make good decisions to prevent further deaths from happening and mitigate the suffering as much as possible."

President Donald Trump says he believes America has done a "phenomenal" job when it comes to COVID-19 and says his efforts prevented a possible three million deaths, as opposed to the 200,000. 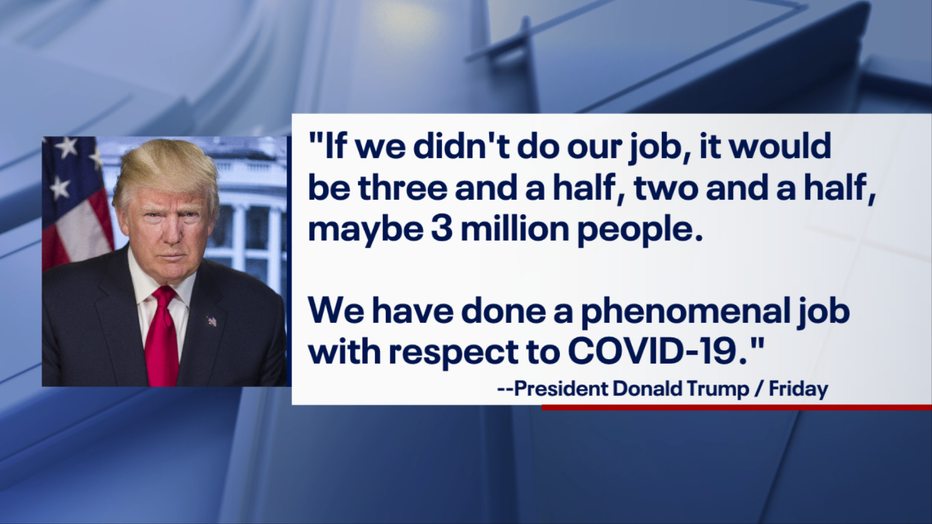