The Democrats’ counsel Daniel Goldman built his reputation as a federal mob and securities fraud prosecutor.

The Republicans’ lawyer Steve Castor helped steer some of the most notable probes of the Obama administration.

Goldman and Castor found themselves front and center at the televised hearings that mark a critical new phase in the probe into allegations that President Donald Trump abused the power of his presidency by pressing Ukraine's leader to investigate a Trump political rival.

Goldman, the investigations chief for Intelligence Committee Chairman Rep. Adam Schiff, D-Calif., and Castor, the GOP chief investigative counsel, had previously asked the bulk of the questions of witnesses during weeks of closed-door depositions with current and former administration officials and diplomats. 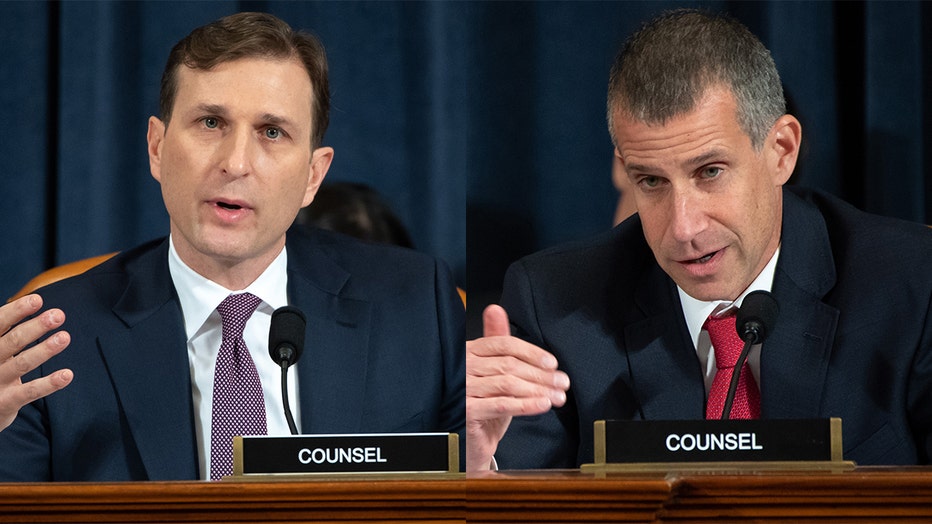 Goldman spent about a decade as a federal prosecutor in the Southern District of New York. He stepped away from his gig as an MSNBC pundit and fellow at the Brennan Center for Justice to jump into the trenches of Capitol Hill in the midst of the fourth impeachment inquiry of a president in U.S. history.

"You're going to see a prosecutorial approach," said Elie Honig, a former federal prosecutor who worked with Goldman to successfully prosecute a Genovese family boss and two mob hit men for racketeering, two murders and an attempted murder. "You will see somebody who knows every detail of every piece of evidence and will bring it to bear in his questioning. You'll see someone who knows how to get right to the point.“

Goldman, who was a fierce Trump critic as a cable news legal analyst, certainly has a bigger public profile than Castor, who has served as a senior aide to the top Republican on the House Oversight and Government Reform Committee for more than a decade.

Goldman also was part of the team that prosecuted Las Vegas sports bettor William "Billy" Walters, who was convicted on fraud and conspiracy charges in 2017 for his role in a $43 million insider-trading scheme.

He followed the footsteps of his late father, Richard Goldman, who was a federal prosecutor in Washington. The younger Goldman took a brief detour into journalism before devoting himself to the law. He contributed to NBC Sports' Emmy-winning coverage in the 2002 and 2004 Olympics before attending Stanford Law School.

RELATED: Impeachment Hearings: What you need to know

One of Goldman's first cases after becoming a federal prosecutor in 2007 was as part of a yearlong joint operation between New York City and federal law enforcement. Lauren Ouziel, a former federal prosecutor who worked with Goldman on that case, said he quickly established a reputation as "hardworking and extremely sharp.“

"Danny, in his first year at the Office, was assigned to the case and immediately was able to handle whatever was thrown at him — and a lot was," Ouziel, a professor at Temple University's law school, wrote in an email.

Goldman’s former boss, Preet Bharara, the former U.S. attorney for the Southern District of New York, told the Washington Post that his former staff member has a “very powerful presence.”

“He was one of the go-to trial guys, and there’s no case that’s too complex for him. He’s a great prosecutor and he’s got a very powerful presence,” Bharara said. “To the extent the public will be watching and looking for a credible questioner, I think they will be very impressed with Dan Goldman.”

Castor earned his law degree from George Washington University and was a litigation attorney in Washington, D.C. and Philadelphia before getting into government work, according to a biography on the website of the Federalist Society, where he is listed as a contributor.

He has served under seven committee chairmen, including four Republicans, since joining the oversight staff in 2005.

Castor was deeply involved in investigations of the Obama Justice Department's ill-fated gun trafficking initiative Operation Fast and Furious, the attack on a U.S. diplomatic mission in Benghazi, Libya, and a probe during the first term of the Obama administration into whether the Internal Revenue Service was applying special scrutiny to certain political groups that were applying for nonprofit organization status.

"He has the institutional knowledge, experience and prowess to be the guy in the hot seat," said former Rep. Jason Chaffetz, a Utah Republican who chaired the oversight committee from 2015 to 2017 and worked closely with Castor. "Most of the public hasn't seen him but for a photo of him in the background whispering to the chairman or a ranking member. But behind the scenes, he's been doing these types of inquiries for years.“

Kurt Bardella, a former spokesman for the Oversight Committee, described Castor as "one of the most talented people" he ever worked with on Capitol Hill.

"He is thorough, diligent and prepared," said Bardella, who left the Republican Party and became a Democrat. "Internally, we would joke that he had kind of Elliot Ness style about him or the guy from Dragnet. He was just the facts. This isn't a guy that seeks out the limelight, not a grandstander.“

Castor was tapped to be the GOP’s counsel in the impeachment hearings from the House Oversight Committee by Rep. Jim Jordan, R-Ohio, who recently joined the Intelligence Committee, Fox News reported.

Lawmakers were expected to ask some questions of the witnesses, but much of the questioning was left to Goldman and Castor. Each side was given at least 45 minutes to examine and cross-examine the witnesses. The first two witnesses who testified Wednesday were Bill Taylor, the U.S. ambassador to Ukraine, and George Kent, deputy assistant secretary of state for Europe and Eastern Europe overseeing Ukraine policy.

During the closed-door depositions prior to the public impeachment hearings, Goldman was assisted by another prosecutor from the Southern District of New York, Dan Noble.

Noble, who may also assist in the public hearings, teamed up with Goldman to convict reputed Russian mobster Mikhail Zemlyansky in 2015 of racketeering, insurance fraud and securities fraud. Zemlyansky was at the center of a Russian-American criminal ring that ran an auto insurance scheme that netted more than $100 million, according to prosecutors.

Transcripts of the closed-door testimony provide at least a hint of what viewers may see as the impeachment inquiry shifts into public view.

Castor rankled Democrats when he questioned witnesses about the identity of the whistleblower.

The transcripts show Goldman asking questions in a lawyerly and focused style but also revealing occasional glimpses of empathy.

At one point during the closed-door questioning of Marie Yovanovitch — who was ousted from her U.S. ambassadorship in Ukraine after Trump lost confidence in her — Goldman offered the diplomat time to collect herself as she recounted conversations surrounding her abrupt recall from her post.

When the interview resumed, Goldman sought to turn the attention back to Yovanovitch as a sympathetic witness.

"Ambassador Yovanovitch, we understand this is a difficult and emotional topic, and we thank you for your honest recollection and answers," he said.

“You have to be calm, and strong, and roll with the punches, and I think Dan has always had his wits about him,” Bharara told the Post, noting an incident last month when Republicans stormed a closed-door impeachment hearing.

Both attorneys were regarded as smart interrogators who were expected to avoid grandstanding and keep the focus on the essential elements of the impeachment inquiry, according to former colleagues.

While the two attorneys are expected to be feature players, House committee members also have five minutes each to question witnesses during the latter portion of the public hearings.

Yovanovitch is the next witness scheduled to testify on Friday.

The Associated Press and Fox News contributed to this report. This story was reported from Los Angeles.