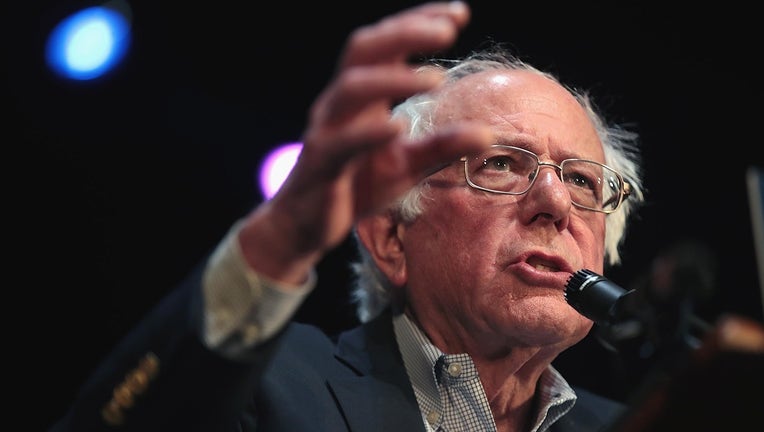 Now the presidential candidate wants to go a big step further - arguing that those currently behind bars should be able to vote too.

Asked on the campaign trail in Muscatine, Iowa on Saturday if those imprisoned should have the right to vote, the independent senator from Vermont who's making his second straight bid for the Democratic nomination answered: "I think that is absolutely the direction we should go."

"In my state, what we do is separate. You're paying a price, you committed a crime, you're in jail. That's bad," Sanders explained. "But you're still living in American society and you have a right to vote. I believe in that, yes, I do."

Vermont and Maine are the only states to allow felons currently serving their sentences to vote.

The issue of voting rights for felons is in the spotlight in Iowa, the state that votes first in the presidential caucus and primary calendar. The Hawkeye state and Kentucky are the only two in the nation to permanently disenfranchise everyone with felony convictions from voting.

owa GOP Gov. Kim Reynolds is pushing for a constitutional amendment to allow convicts to have their voting rights restored after they've served their sentences. But last week, the Republican-controlled state-Senate torpedoed the plan, likely killing it for the year.

Sanders took to Twitter at the time to write "this is a disappointing setback for voting rights in Iowa."

Voting rights in 36 states and the District of Columbia are restored to felons after they've completed the sentences, with the laws varying to factor in parole and probation.

Presidential candidate Sen. Elizabeth Warren of Massachusetts was asked about the issue a week ago, as the Massachusetts Democrat was campaigning in Iowa. She called for felons who've served their time to have the right to vote. But she stopped short of advocating that those actually in prison be able to vote.

"While they're incarcerated, I think that's something we can have more conversation about," she said.

Last November, voters in Florida approved a constitutional amendment restoring the right to vote for the 1.4 million felons who've finished serving their sentences. Florida was the most populous of 10 states that permanently disenfranchised some people with criminal convictions.

Opponents of allowing those in prison to vote argue that if you're not willing to follow the law, then you should not have a role in making law for everyone, either directly by voting on referendums and ballot initiatives or indirectly by electing lawmakers.

They point out that that the whole point of incarceration is to separate felons from society.

The Republican National Committee said Democratic attempts to expand the pool of voters friendly to their party is behind the push to allow felons serving time to vote.

"From suggesting that illegal immigrants should be able to vote, to trying to lower the voting age to 16, to now proposing convicted felons behind bars should be able to vote, Democrats are once again trying to rewrite the rules for their own political agenda. When they can't win at the ballot box, Democrats instead try to rig the system in their favor," RNC spokesperson Mandi Merritt told Fox News.