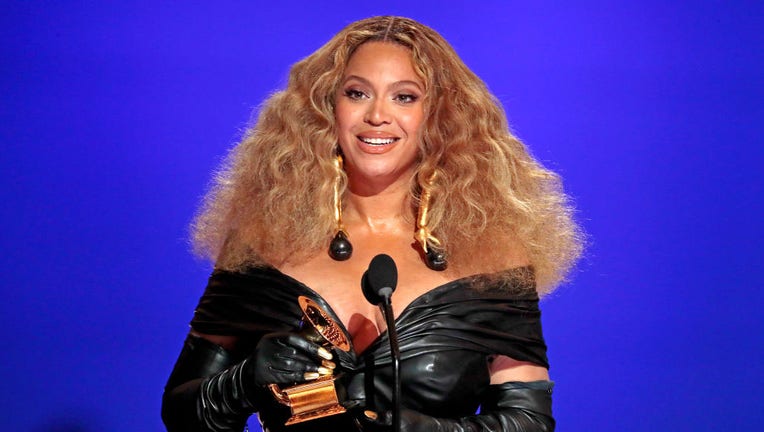 FILE IMAGE - Beyonce, who made history by winning 28 Grammys, more than any female or male performer, accepts the award for Best R&B Performance at the 63rd Grammy Award outside the Staples Center on March 14, 2021, in Los Angeles, California. (R

LOS ANGELES - Beyoncé has announced her first album since 2019, called "Renaissance," which is due to be released next month.

The new project was announced on social media by the streaming platforms Tidal, Spotify and record label Columbia Records. It’s due to be released on July 29.

Beyoncé, the 28-time Grammy winner who, also posted a cryptic update on her website, reading "act i, Renaissance, 7.29." Apple Music’s pre-add function reveals that "Renaissance" will have 16 tracks.

The BeyHive, a name for the superstar’s legion of fans, was buzzing with the news of the new music. Last week, fans noticed the singer’s social media platforms had been scrubbed of profile pictures, with some taking it as an indication of new music to come.

Little is known about "Renaissance," with Billboard pointing out that if it is indeed a full-length LP, it would be her seventh studio album as a solo performer and the follow-up to "Lemonade" released in 2016.

"Lemonade," a visual album in which the private Beyoncé bares her soul, singing about a troubled relationship, Black pride and motherhood, was named the AP’s album of the decade in 2019 and received several awards nominations.

the Grammy Award-winning artist took a moment to reflect on the late NBA champion, saying, "And this was one of his favorite songs."

Last summer, Beyoncé confirmed she was working on new music.

"With all the isolation and injustice over the past year, I think we are all ready to escape, travel, love, and laugh again," she told Harper’s Bazaar. "I feel a renaissance emerging, and I want to be part of nurturing that escape in any way possible. I’ve been in the studio for a year and a half."