President Joe Biden signed an executive aimed at targeting anti-competitive practices in tech, health care and other parts of the economy on July 9, 2021.

WASHINGTON - President Joe Biden on Friday signed a sweeping executive order aimed at promoting competition across the U.S. economy by pushing federal regulators to ban or limit non-compete agreements, occupational licensing restrictions and other measures that officials say make it harder to land a job.

The order includes 72 actions and recommendations that the White House says "will lower prices for families, increase wages for workers, and promote innovation and even faster economic growth."

It calls for the Federal Trade Commission to ban or limit non-compete clauses that have stopped workers in industries including fast food and Big Tech from going to other employers for higher pay. A 2019 analysis by the liberal Economic Policy Institute estimated that 36 million to 60 million workers could be subject to non-compete agreements.

White House press secretary Jen Psaki said earlier this week that the provision would help workers in construction, hotel services and other blue-collar industries whose ability to seek better wages is often stymied by non-compete clauses.

The order, outlined Friday in a fact sheet by the White House, also encourages the FTC to ban "overly burdensome" occupational licensing requirements, which can inhibit a worker’s ability to find a job and particularly across state lines — where such requirements are not always consistent.

It can hurt the earning power of military spouses, skilled immigrants and former prisoners, the White House said. The requirements can also limit the ability of teachers or hair stylists to move across state lines, while also making some spend money at for-profit schools to affirm skills they already have. Roughly 30% of U.S. jobs require a license, according to a 2018 FTC report.

Furthermore, it encourages the commission and Department of Justice to strengthen antitrust guidance to prevent employers from collaborating to suppress wages or reduce benefits by sharing wage and benefit information with one another.

"In total, higher prices and lower wages caused by lack of competition are now estimated to cost the median American household $5,000 per year," the White House said in the fact sheet. "Inadequate competition holds back economic growth and innovation." 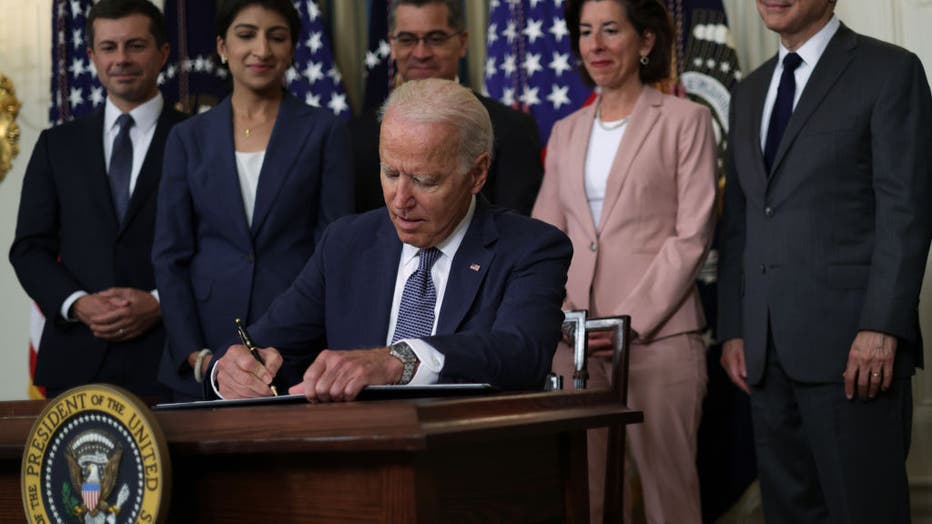 The order also includes consumer-focused initiatives. It calls on the Transportation Department to consider issuing rules requiring airlines to refund fees when baggage is delayed or in-flight services are not provided as advertised. Additionally, it calls for a ban on excessive early termination fees by internet companies.

RELATED: US plans to make airlines refund fees if checked bags are delayed

It takes aim at tech giants like Facebook, Google, Apple and Amazon by calling for greater scrutiny of mergers, "especially by dominant internet platforms, with particular attention to the acquisition of nascent competitors, serial mergers, the accumulation of data, competition by 'free' products, and the effect on user privacy."

Business and trade groups immediately expressed opposition to the order, arguing that it would stifle economic growth just as the U.S. economy is recovering from the coronavirus pandemic.

"Some of the actions announced today are solutions in search of a problem," said Jay Timmons, president and CEO of the National Association of Manufacturers. "They threaten to undo our progress by undermining free markets and are premised on the false notion that our workers are not positioned for success."

Marc Perrone, president of the United Food and Commercial Workers International, a private-sector union representing 1.3 million workers, said the order "sends a clear message that this White House is committed to creating a level playing field for American workers."

Sen. Amy Klobuchar, a Minnesota Democrat who serves as chair of the Senate Judiciary subcommittee on competition policy, said that Biden's executive order needs to be supported by congressional action.

"Competition policy needs new energy and approaches so that we can address America’s monopoly problem," Klobuchar said. "That means legislation to update our antitrust laws, but it also means reimagining what the federal government can do to promote competition under our current laws."

Some business advocacy groups cheered certain provisions but similarly warned the order could slow the economy.

Alfred Ortiz, president and CEO of the Job Creators Network, applauded measures that call for relaxing occupational licensing requirements and promote health care price transparency, but he said that other aspects, such as regulating internet termination and in-flight WiFi fees, "meddle in the free market" and may lead to higher prices for consumers.