PHOENIX - The Phoenix Police Department says a purple brick of fentanyl was found during a traffic stop, among other items, and this actually was the first they've seen.

In a tweet by the department, they say 1kg of fentanyl powder was found, equaling about 2.2 pounds. 2,000 fentanyl pills, $13,000 and four guns were also seized.

These seizures are just one of many in the Phoenix area as authorities say the U.S. Mexico border is the top spot for drug trafficking.

Authorities say smugglers are getting more creative with rainbow fentanyl pills and now this purple brick, and they are worried things are going to get worse.

When it comes to fentanyl, we’re not talking about the "legal" kind from your doctor – this is illegal unregulated fentanyl. The drug sometimes is not measured out correctly, and in fact, it only takes the equivalent of about five grains of salt to lead to a potential overdose.

Because it’s so addictive, it's getting put in other drugs.

"It has just boomed," says Phoenix Police Sgt. Melissa Soliz. "It took over so we do see fentanyl every day."

Police were shocked to find the purple brick of fentanyl powder, saying it was the first they've seen.

"This is the first one so we will definitely keep our eye out and see if we start seeing more purple or if any other colors start to come," Soliz said.

Three people, all in their 20s, were arrested and taken to jail in connection to this seizure.

Patrol officers carry Narcan and are trained on how to handle the potent and lethal drug.

"It has the ability to go airborne. So once fentanyl is in the air, if the wind, the breeze, it falls and it kind of poofs up into the air and we breathe it in, that’s when it becomes very dangerous," Soliz said. 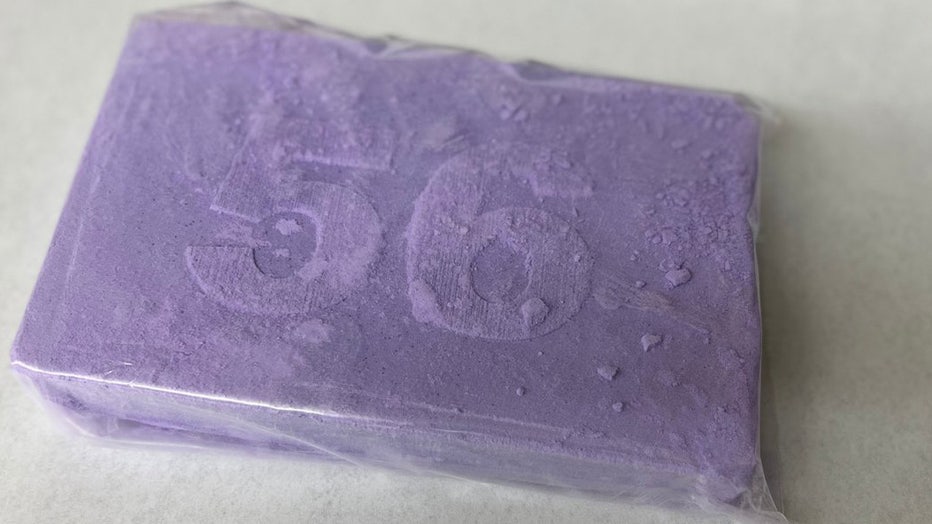 Over at the Drug Enforcement Administration (DEA) Phoenix Division, Cheri Oz says they see tons and tons of fentanyl.

Smugglers are also getting creative on how they disguise it.

"The most recent and alarming ones that I've seen are the fentanyl that is colored the same color as Advil and they are not marked," Oz said.

She says 44% of the pills they seize contain a lethal dose of fentanyl.

The Centers for Disease Control and Prevention says fentanyl is now the number one cause of death for Americans aged 18 to 45.

Over in Florida the attorney general wants the federal government to officially declare it as a weapon of mass destruction.

"Marketing and expanding their customer base … it's just a business model for them. When you talk about cartels and what motivates them, its just our money, they don’t care about lives," Oz said.

It only takes one pill to kill.

For now, law enforcement and health officals are urging people to talk to their neighbors, friends, and family about the dangers of these drugs.

Agents found 340 packages filled with 187 pounds of fentanyl pills on I-8. The drugs have an estimated value of $4.3 million.

Police pulled Brooks Corbin over near Arizona Avenue and Riggs Road on Aug. 8 after they noticed that the car had a fake license plate.