In 2016, Brood V emerged from the ground after 17 years. This file video shows a boy in Mansfield, Ohio sweeping them off the family's front porch. Credit - Facebook/Richelle Smart via Storyful

CINCINNATI - Brood X, the largest and most widespread brood of cicadas in the U.S., is set to emerge from the ground this spring after 17 years.

The periodical cicadas, which are different than the annual cicadas seen throughout the U.S. each year, last emerged in 2004.

There are several species of periodical cicadas that emerge in different years, classified by scientists as different "broods." Each brood is isolated in a certain region and only emerges in 13 or 17-year cycles, according to Michigan State University entomologist Gary Parsons.

The cicadas spend most of their lives underground feeding on sap from tree roots. 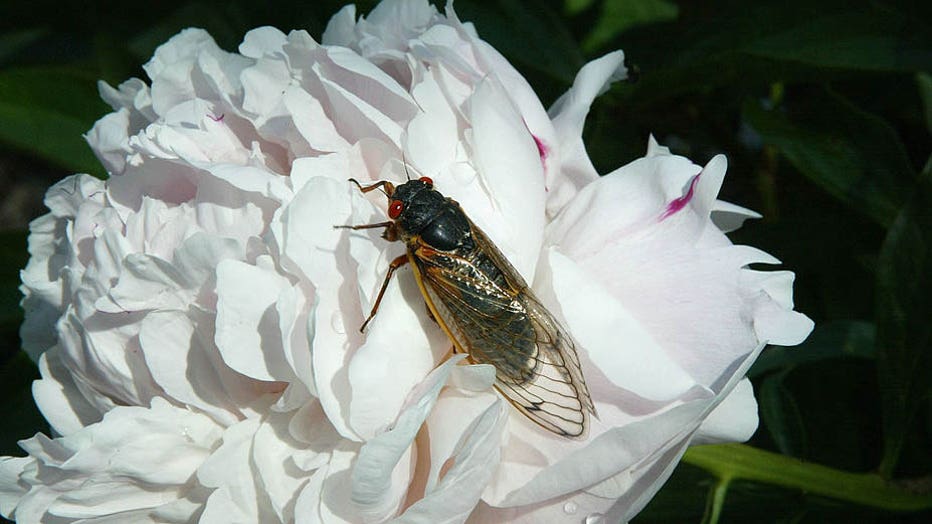 FILE - A newly emerged adult cicada belonging to Brood X dries its wings on a flower on May 16, 2004 at a park in Washington, D.C. (Photo by Alex Wong/Getty Images)

Brood X will begin to emerge once the ground reaches about 64 degrees Fahrenheit, experts say. It’s believed that the periodical cicadas’ 13-or 17-year cycles have happened for millions of years.

"It is thought that by having the long life cycles, cicadas have prevented predators from specifically targeting them for food. Then by emerging in the millions all at once, they are too numerous for any predators that do eat them from ever wiping them out. There are so many of them that lots of them will always survive," Parsons wrote.

There are some in the brood that can emerge off-schedule, too. Cicadas seen in May 2017 in D.C. and the surrounding counties in Virginia and Maryland, as well as in Ohio, Indiana, Tennessee, Kentucky, Pennsylvania, Delaware and New Jersey, may have been "stragglers" of Brood X, according to the University of Maryland’s department of entomology.

When the billions of cicadas emerge after nearly two decades underground, they have a short lifespan above ground — flying to the treetops to mate. The males sing to attract females, and their offspring will bury themselves into the ground for another 17 years, only to continue the cycle in 2038.

The good news is that cicadas aren’t harmful, but may get in the way.

"Cicadas do not bite and are harmless to humans and property — other than being a nuisance. They may amass in millions in parks, woods, neighborhoods and can seemingly be everywhere. When they are this abundant, they fly, land and crawl everywhere, including occasionally landing on humans," Parsons added.