Canadian diver Pamela Ware vowed she’s not going anywhere after a stunning mistake during the 3-meter springboard semifinal at the Tokyo Olympics on Saturday.

Ware jumped off the board and splashed into the pool feet first. The failed dive resulted in no points and she finished in 18th place with a score of 245.10. The top 12 divers moved into the medal round.

Ware told her followers she was "proud" of herself at the end and the mistake happened to her at the "wrong time."

"I am very proud of myself. Something really difficult. What you see in the competition is just a tiny factor of what we actually do to get to where we are. I was so ready for this competition and I made a mistake. It could have happened to anybody but it happened to me at the wrong time," Ware said in an Instagram video on Sunday. "But I am proud because I have done everything possible to make it to where I am. And I’m human. I’m allowed to make mistakes." 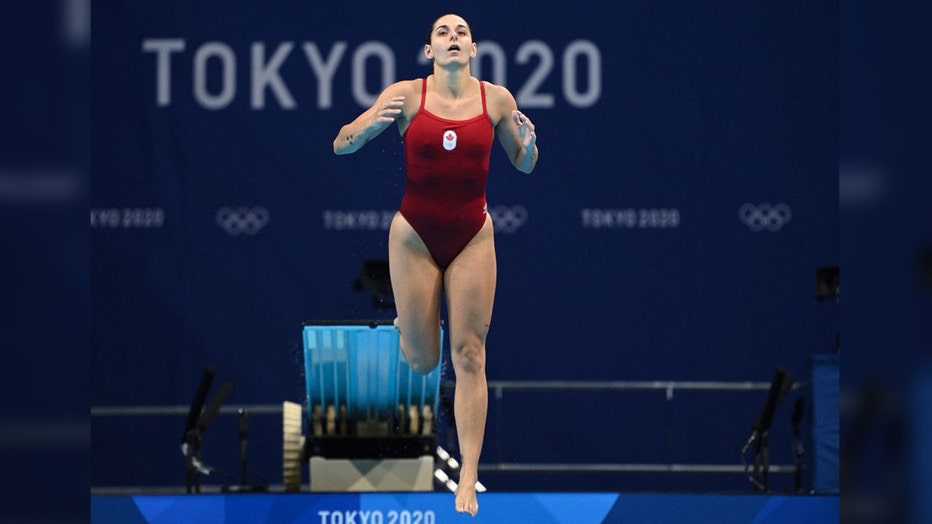 FILE - Canada's Pamela Ware slips from the board on her final dive, resulting in a failed dive, during the women's 3m springboard diving semi-final event during the Tokyo 2020 Olympic Games at the Tokyo Aquatics Centre in Tokyo on July 31, 2021.

She said this moment wasn’t going to have an everlasting effect on her or her career.

"I hope you guys are gonna get used to having me around because I’m not going anywhere. I’m not giving up. This competition doesn’t define me and I’m not letting it defeat me. I’ll be around for another three years," she added.

Ware had come into the Olympics fresh off of a gold medal performance in the 2019 Pan American Games in Lima, Peru. She was first in the 3-meter synchronized springboard contest.

She won silver medals in the 2015 Pan American Games in Toronto and silver in the 2015 World Championships in Kazan, Russia.