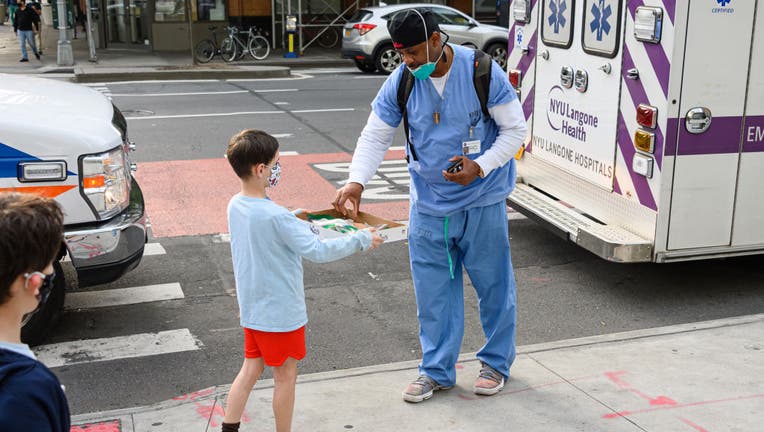 FILE - A kid greets a medical worker outside a hospital on May 24, 2020 in New York City. (Photo by Noam Galai/Getty Images)

ATLANTA - As the world continues to grapple with the novel coronavirus pandemic, the U.S. Centers for Disease Control and Prevention is warning that 2020 could also be a peak year for another outbreak: acute flaccid myelitis (AFM), an uncommon but serious neurological condition.

The CDC said that the disease mostly affects children, with its U.S. infection rate peaking between the months of August and November every two years since 2014.

Limb weakness and paralysis are the most common symptoms of AFM.

While the disease is generally uncommon and rarely fatal, the CDC says the debilitating neurological condition can sometimes lead to permanent paralysis.

The United Nations says coronavirus-linked hunger is leading to the deaths of 10,000 children a month in the first year of the global pandemic because of fears of contamination and movement restrictions.

The CDC says those who contract AFM may experience:

More than 90% of patients with AFM had a mild respiratory illness or fever consistent with a viral infection before they developed AFM.

“As we head into these critical next months, CDC is taking necessary steps to help clinicians better recognize signs and symptoms of AFM in children,” said CDC Director Robert Redfield, M.D. “Recognition and early diagnosis are critical. CDC and public health partners have strengthened early disease detection systems, a vital step toward rapid treatment and rehabilitation for children with AFM.”

According to the health agency, 2018 saw the third-largest recorded peak of AFM in the U.S. with 238 cases in 42 states.

From those reported cases of AFM, the health agency recorded some findings:

The health agency said that various viruses can cause AFM, and may have also contributed to past recorded peaks.

“Although AFM symptoms resemble those of polio, all specimens have tested negative for poliovirus. There is currently no specific test, proven treatment or prevention method for AFM,” the CDC wrote.