PHOENIX - "The Celebration of Christmas" is a Broadway-style production, a seasonal spectacular put on by the Dream City Church that includes actors, choreographers, crew and live animals, and a Valley man is adding a second beast to the cast of characters.

FOX 10 introduced "Elvis", a rescue camel trained to perform in the production, a few years ago. Now, there's another star taking the center stage.

Conrad added Ben to his menagerie this past October, with the hope that like Elvis, the Clydesdale could shine as well.

Ben came from a breeding farm in Durango, Colorado, and he's an eight-year-old registered Clydesdale. Ben is 19 hands tall, and weighs 1,900lbs. His color is rare, and it's one of the reasons Conrad fell in love so quickly.

"We will just spend time every day walking," said Conrad.

It's also why Conrad will work consistently with the Clydesdale, preparing for the show. 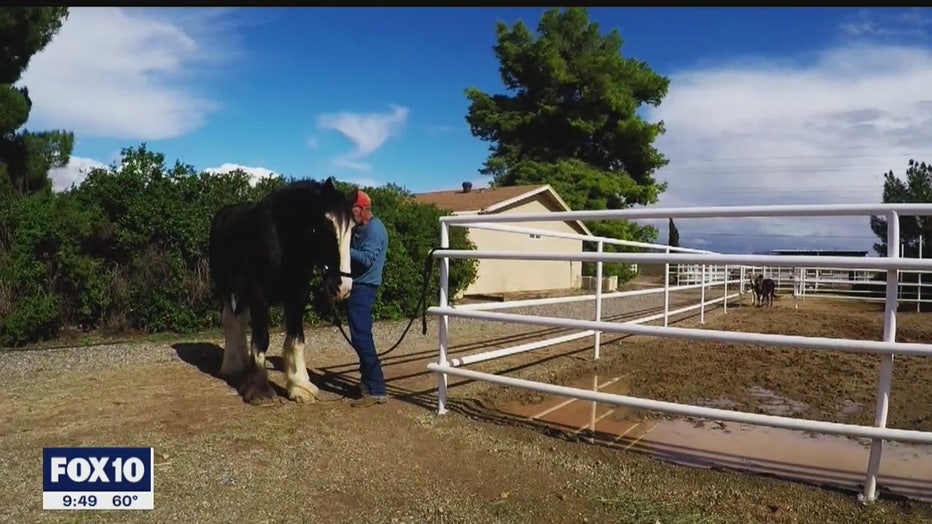 "There's always a concern with animals, but he's training his personality," said Conrad.

"Generally, how he behaves, I'm comfortable that he is going to be a star, and he's going to look good going across stage," said Conrad.

"The sleigh actually comes on from one side, drops off a couple of characters who are singing, snow is falling, goes off, turns around, and by the end of the melody, comes back on for kind of a big final pose," said Mark Stoddard with Dream City Church.

Stoddard is the church's Artistic Director, running a production that has marveled millions for over four decades.

"It is a Broadway musical meets a living nativity, kind of," said Stoddard. "Think of Radio City Music Hall, all those kind of beautiful, wonderful songs of the season. Each scene is a big production number, with kind of a different theme. We have a storyline that weaves through it."

Stoddard says hundreds of people participate, from designers to the technical crew to the volunteers. The cast consists of 275 people, and auditions were held in August.

Conrad says he will put giant cotton balls in Ben's ears, so noise won't be an issue, and blinders will keep the horse focused on the task at hand, pulling the sleigh, crossing the sleigh, bringing the Christmas celebration to life.

Proceeds from the Celebration of Christmas production help fund social compassion programs run by the church.

The Celebration of Christmas runs through December 22.