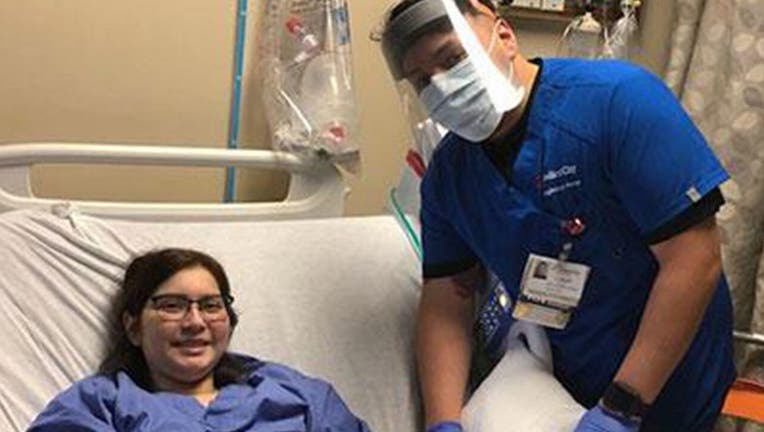 Paola Castillo spent 79 days in the hospital after she contracted the coronavirus and spent more than a month on a ventilator.

FOX NEWS - A 24-year-old coronavirus patient who was hospitalized for nearly three months and placed on a ventilator with "dismal odds" of survival was released from a Texas hospital Wednesday.

“I saw a light,” Paola Castillo said while recuperating after 79-days at Medical City North Hills in Dallas, according to a hospital press release. “That light was God telling me it was time to wake up.”

Castillo was admitted to the emergency department on April 27 after experiencing difficulty breathing, a cough, and fever for six days prior.

Her symptoms worsened, and she was placed on a ventilator in the first 24-hours after being admitted to the hospital. Healthcare workers told her husband and her mother that she was in a "touch and go" situation.

Castillo told CBS affiliate DFW that she believes she contracted the virus while working at the bank and never thought she could be affected by the outbreak of COVID-19, which has infected 307,572 in Texas and killed 3,735 others to date.

The state has been grappling with a resurgence of new cases due to lack of social distancing precautions and unwillingness by some to wear a mask and some hospitals have reported bed space swollen beyond capacity due to the uptick in hospitalizations.

"Maybe if I would have just listened and worn a mask, just a simple thing, I would have avoided all this," Castillo said.

She was slowly weaned off of the ventilator but when she awoke, her ability to talk, swallow, walk and perform other physical functions had deteriorated, requiring weeks of physical therapy, the hospital said.

Castillo ventured outside to feel the rain after 67 days inside the hospital. She took her first steps since being admitted on July 3 and has since tested negative for the coronavirus, doctors said.

“What we are doing right now is at the heart of what it is to be human. What the care team has done for even this one patient is a mark of a life well-lived and a purpose served,” Andrea Morian, director of Rehabilitation Services at Medical City North Hills said in a statement. “This is a single patient. The impact our teams have on so many more right now is overwhelming.”