Complications from the virus put Vince Remediz in a coma for 30 days. His family says they feared the worst. But with the help of medical staff, he slowly started improving.

Vince had been on a ventilator since April and lost 50 pounds during his three months fighting COVID-19. Much of that time was spent in isolation away from family and friends.

But on Tuesday, Vince was surrounded by loved ones as he headed home. It was a day his family wasn't sure would ever come.

“We did plan for some of the worst cases at times,” said his brother, Thomas Remediz. “He’s continued to fight. Never quit.”

But Sgt. Vince Remediz managed to pull through and walked out the front doors of Methodist Rehabilitation Hospital. 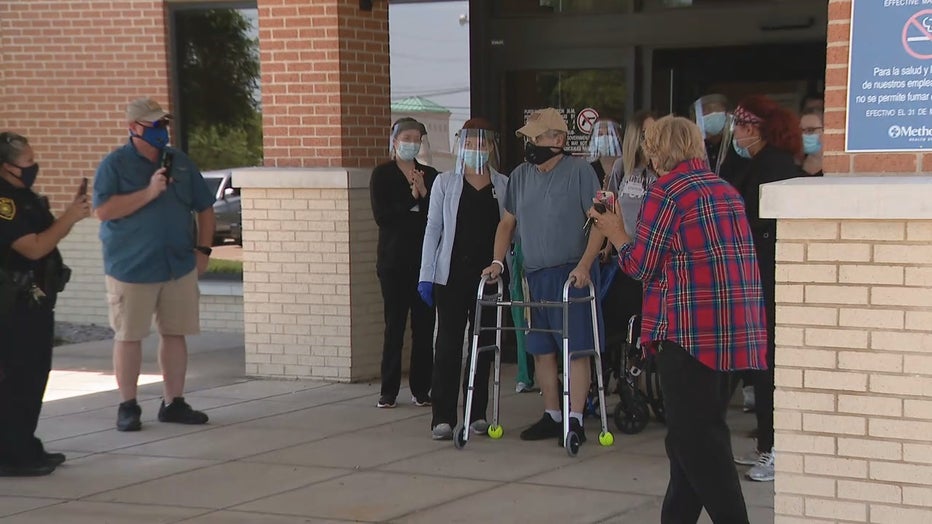 At one of his lowest points, Vince’s kidneys were failing and he developed pneumonia. His family says he received plasma from a recovered COVID-19 patient and hydroxychloroquine, among other medical treatments.

Vince’s family isn’t sure what to credit with his recovery but say sometime at the end of May, he began to turn around.

“He was off of sedation and paralytics by the first of May and nothing was going on,” Thomas recalled. “But on the 30th of May, I called the nurse, was talking to her. She said he looked at her when she came into the room.”

Through it all, Vince still managed to keep his humor.

“I lost about 50 pounds, just crazy,” he said. “Of course as a diet, I would never recommend it.”

The staff at Methodist Rehabilitation Hospital says the virus has taken a toll on Vince’s body, as they've seen with other long-term COVID-19 patients. At first, he couldn't stand for more than a few seconds or tie his shoes before getting winded.

“It was pretty emotional because from day one where he didn't want to get out of bed to him wanting to those steps to the care were huge,” said Monica Watford, an occupational therapist.

Now, Vince is taking those steps back home but leaving some parting advice for others.

“They should take it seriously. Don’t think it’s a joke. I wouldn't wish it on my worst enemy,” he said. “You never know what to expect and what you're gonna go through. The only thing I can tell people is please wear your mask.”

Vince will continue his therapy three times a week at home. He says now that he's recovered from the virus, he wants to donate his plasma to help others battling this disease.