In the smallest stage yet, Tuesday’s event in Iowa is the last chance for six candidates to debate before the Iowa caucuses on Feb. 3.

DES MOINES, Iowa - The top Democratic presidential candidates will take the stage Tuesday night in the last debate before the nation’s first presidential caucus next month.

Only six candidates out of 12 qualified to participate in the televised debate, the smallest number yet and the first with an all-white lineup.

Businessman Andrew Yang, an Asian American candidate who appeared in the December debate, failed to hit the polling threshold for Tuesday's event. And New Jersey Sen. Cory Booker ended his campaign on Monday after he didn't make the debate stage, leaving just one black candidate — former Massachusetts Gov. Deval Patrick — in the race.

Tuesday will be the candidates' last chance to debate before Iowa’s lead-off caucuses, set for Feb. 3. The winner will leave Iowa with momentum for the primaries to come. State polling shows Iowa’s top preference too close to call.

Some of the fiercest clashes could center on Sanders and Warren, fellow progressives who until now have largely avoided criticizing each other.

But Warren chastised Sanders over the weekend following a report that his campaign instructed volunteers to speak poorly of her to win over undecided voters. The tensions escalated on Monday after CNN reported Sanders told Warren in a private 2018 meeting that he didn't think a woman could win the election, a charge that Sanders vigorously denied but that Warren confirmed later Monday.

“Among the topics that came up was what would happen if Democrats nominated a female candidate. I thought a woman could win; he disagreed,” Warren said in a statement. “I have no interest in discussing this private meeting any further because Bernie and I have far more in common than our differences on punditry.” 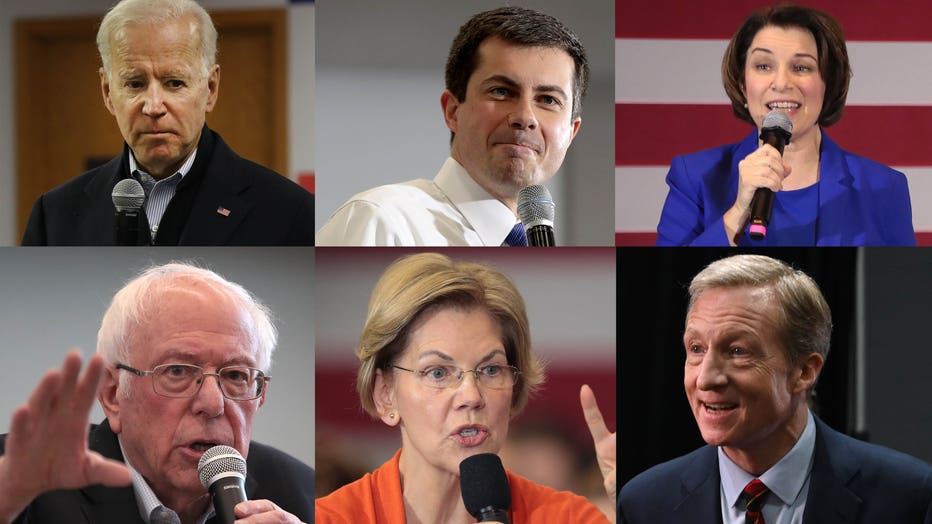 The feuding will likely expand to include nearly every candidate on stage.

Sanders has recently stepped up his attacks on Biden over his past support of the Iraq War, broad free-trade agreements and entitlement reform, among other issues.

Klobuchar, who has had several strong debates, will be looking for another opportunity to highlight her candidacy as she remains stuck in the middle of the pack in polling. Steyer will have to answer criticism that he's buying his way to the White House.

And with two surveys showing Buttigieg losing support in Iowa, the former mayor will need a breakout moment to regain some momentum before the caucuses.

Those shifting dynamics mean Tuesday's debate could be unlike any of the others that came before it this cycle. The generally polite disputes over policy items including health care and immigration are poised to be replaced by increasingly bitter and personal knocks. And it will happen as many Democratic voters are just beginning to tune into the race.

RELATED: These are the 15 candidates running for president in 2020

“The debates are always important — but this one’s probably the most important for these candidates," said Scott Brennan, a former Iowa Democratic Party chair and current committeeman. "We’ve got at least four people who are bunched right there together at the top. So how do you break out?”

It will also be the first debate since President Donald Trump authorized the killing of Iranian Gen. Qassem Soleimani, which heightened tensions throughout the Middle East.

Biden advisers see the development as a boon to his candidacy, allowing him to argue he's a steady, experienced alternative to Trump. But it could easily become a problem if Biden fails to answer what will likely be pointed attacks from Sanders on his support for the Iraq War.

While Biden acknowledged over a decade ago his vote was a mistake, he’s struggled to offer a clear answer for his support, at times misleadingly asserting that he opposed the war from the start.

Clashes in the debate could also offer an opportunity for candidates who generally stay above the fray. While Klobuchar sparred with Buttigieg during the last debate, she’s previously sought to tamp down tensions among her opponents on the stage and avoided taking the moderators’ bait in going after other candidates.

And Steyer, who has largely flown under the radar throughout the campaign, could look to capitalize on a handful of recent polls that have shown him gaining traction in some of the early primary states with a standout debate moment.

The debate is being held on the campus of Drake University and will be televised on CNN.